Wheel Specifications for the Modeller 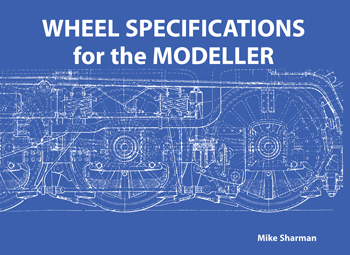 Mike Sharmanâs âWheel Specifications for the Modellerâ was long regarded as one of the vital weapons in the finescale modellerâs armoury. It listed just about every known locomotive of just about every known British railway company and set out the size and other details of their wheels in convenient tabular form.

This revised edition has been updated, and, in the few places where errors were detected in the original, corrected.

From the introduction: "Mike Sharmanâs beautifully engineered locomotives and rolling stock, performing impeccably on trackworks of intriguing complexity, have inspired modellers for decades. Similarly his books have taught them valuable practical techniques. The âWheelsâ book filled a particular gap, in that Mike had painstakingly researched and compiled an extensive range of fundamental basic information in a handy and relevant form. It saved a lot of people a lot of work, and it has been too long out of print. Mike is a past-President of the Scalefour Society, so it is fitting that a member of this Society worked to digitalise the material, so that a new edition can now be offered. It has benefited from examination by specialists of the various railway Line Societies, and minor amendments incorporated. Whilst the shape of the book is slightly changed, the familiar tables and text are essentially unaltered and remain a tribute to Mike, a tribute which the Scalefour Society is delighted to have facilitated. May it inspire more modellers and models." John Chambers, Chairman, The Scalefour Society, March 2017.