What individual members are up to.
Post Reply
58 posts

James Wells wrote:
I'll leave you to judge if the effort has been worth it.

From the photo I'd say it was definitely worth the effort 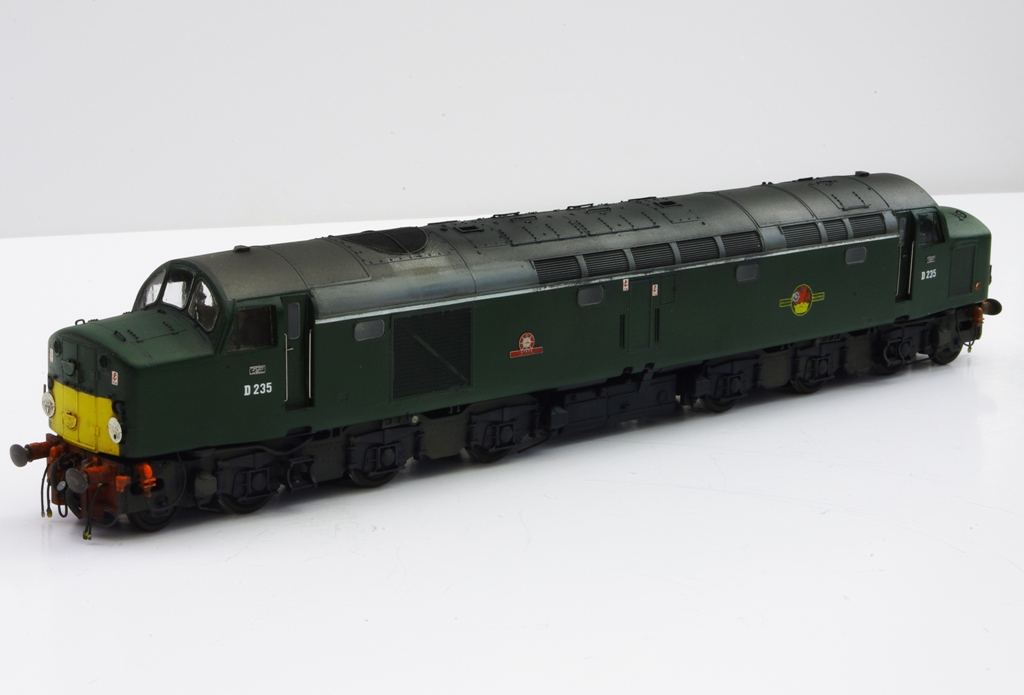 I'll leave you to judge if the effort has been worth it.

MY LORDS! *much waving of arms*

Thank you for the very kind comments!

Following hot on the heals of Apapa is another English Electric loco, but this time one later on in its life - 37514 as it was in 1992. This makes use of a Bachmann loco with various parts from Shawplan. The windscreens and fan grilles are the most obvious changes but I've also refined the openings around the valance to avoid the chunky look which the Bachmann models display. The fan grille is a beautiful etching - as you'd expect from Brian. The model runs on Penbits running gear

The Penbits bogies all complete and working very nicely; I've added the cosmetic frames with their separate brake cylinders and steps. The brake cylinders are the last of my stock of Hornby Class 50 ones. The steps are modified from the Bachmann originals with PH Designs step treads epoxied on. As they come the PHD etch for the steps have the two lower the steps mis-spaced. So, whilst the solution isn't perfect, the overall effect is relatively pleasing. But at five quid a set for the steps, just using the treads isn't very cost effective - I used them as I had them in stock and had intended to use them for the model before realising the issue with them.

So the model is mechanically complete now, all the remains is to add the remaining details, and there are a lot of them, especially around the underframe - it could take a while! As you can see, once you cut away the bits which shouldn't be solid, there's an awful lot of daylight there which needs filling!

Also progressing is a real hybrid of a model. It combines a Lima body, a Heljan chassis with Penbits running gear again.

The chassis has been reduced in width by about 1,5mm - a friend kindly milling the block for me and the tapered ends were finished by hand - you could mill these but I think setting up for all four corners would take longer than it would by hand. This allowed it to fit properly within the Lima body. The body is being treated as I've detailed earlier in this thread with all sorts of Shawplan parts. I think I help pay for Brian's skiing holidays sometimes with my orders!

The key parts, or at least most of them, for the running gear. If you've not yet tried any of Penbits' kits then you're missing out. The kits are superb - not simple but so well thought out. The brake gear is beautiful, and surprisingly sturdy too which should allow it to stand up to handling. The pipework on the bogies is in the course of being replaced, whilst not quite to the extent of Jon Hughes' work, it will hopefully be enough to look right once painted on a layout.

Are any of these builds going to see chapter and verse in any particular magazine? I only ask as I have a 47 to complete, well start really, but I do have a 37 to finish. I used Justin's chassis and I'm getting to the stage where it'll run on a test track. Then comes adding all the detail, as you say Shawplan parts are amazing in their quality.

If you're able to come to the AGM why don't you bring one of your wonderful engines and let it stretch it's legs a bit? Anyway, fabulous modeling. Looking forward to more updates.

Thanks for your kind words Mike!

I won't be able to get to the AGM - I'll be working that weekend, playing with the big train set!

If Editor James is willing, the locos might appear in Snooze - other magazines, quite possibly. I did contact MRJ a while back with regards the class 37, but never heard anything back

But from what people have said to me, I think the class 47 method is one people would like to hear about, and the class 37 is a good solid, detailing project which would seem to appeal to quite a lot of people so I would like to share the methods. Certainly I'll post more updates on here!
James Wells

Excuse the poor phone picture for this one...

Although I was intending to finish detailing the bogies before I out it all together, I couldn't resist having a test assembly. And as testament to Ian's design, it worked perfectly first time! It glided along my test track beautifully!
James Wells

A bit of progress with 37514 - bits of underframe have been added. It's been much simplified as much of it'll be in the dark, depths of the tanks. It's a bit hit and miss determining the exact position of parts as it seems to vary from loco to loco, especially with refurbished examples as time goes on. trying to get it all right from photos is like trying to work out the plumbing on a 9F for the first time using only a couple of very dark photographs, not easy at all!

The tank step needs tidying up as cut the wrong one off by accident! Reattached with very little drama - that'll teach me to concentrate...

I think the clearances between the tanks and the bogies are being pushed to the limit!
James Wells

Not much modelling this week, a last minute break to Cumbria this week saw to that! Railways featured prominently though, we even managed two trips on the Ravenglass & Eskdale Railway. One was planned but we called in for a coffee this morning on our way back and decided we'd have another ride!

Cumbria's not Yorkshire, but could run it a close second - coming from a Yorkshireman, this is praise indeed!
James Wells

Normal service has resumed today! And 37514 is now already for painting/touching up before final details and glazing are added

Incidentally, 'Normal Working Resumed' is one of the most satisfying phrases you can ever hear when you work on the railway - the joy of writing it in a Train Register is rarely surpassed!
James Wells

Keep up the great work - you're putting me to shame

A Danish quickie, so to speak!

For a friend this is a model of 47212 as it was in the early nineties - Gibson wheels are fitted and work with new pick ups. Body wise the model has Shawplan fans and glazing, detailed front ends (all new handrails, Replica headlights and new bufferbeam pipework), along with detailed underframe with daylight where there should be daylight and a bit of extra pipwork.

Now I know the Heljan model has been criticised for its width - it probably is a little wide, but compare it with this view of 47843 passing Gilberdyke last year on a Kirkby Thore - Hull Docks empty gypsum working.

Personally I think the Heljan model fairs pretty well and with a relatively small amount of work, the result is very pleasing.
James Wells

Very nice James.
Do like the roof and its modulated tones...

Could have gone a lot further with the underframe but the overall effect works I think. One of the best things to do with these models (and a number of other diesels) is to remove the moulded brake gear. When it's moulded as part of the bogie frames and miles away from the wheels, it only emphasises how wrong it is. However, its removal leaves a dark space and the mind fills in the rest - we assume that the brake gear should be within the gloom of the bogies and as such we see the gloom and our brains cunclude that the brakes must be in there somewhere, instantly adding depth to the whole area

Jonathan Hughes wrote:Keep up the great work - you're putting me to shame

Thanks Jon, but seriously?!

iak wrote:Very nice James.
Do like the roof and its modulated tones...

I worked from this photo -

Other photos of locos around this time had similar weathering patterns - the dark grey used for the roof on sector locos does fade terribly! Makes a good effect on a model though

James Wells wrote:Now I know the Heljan model has been criticised for its width - it probably is a little wide,

Yes it is but as long as the Heljan models is not run alongside models from other suppliers the difference is not really noticeable. My son has tended to standardise on Heljan for his class 47 stock and they always run well and are easy to convert to P4 standards.

I know it's too wide!

The original DEMU review found this, but I think many people just quote this without ever really looking, jumping on the rather toxic mob-mentality band wagon certain people seem to hold within the hobby (other topics include 'finescale modellers are all elist', etc., etc., you get the idea!).

This photo is one I always like to look at - the loco looks very 'right' to me, even though I know the issues of the base model. 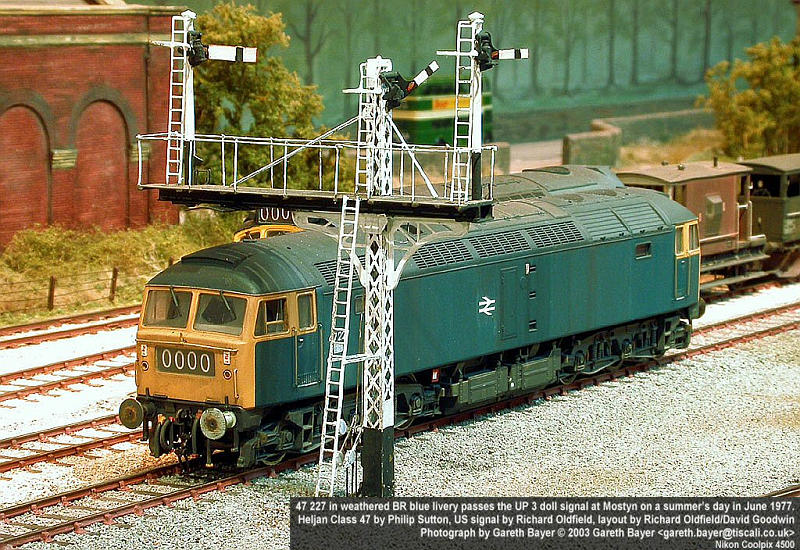 The running qualities, especially once on better wheels, are superb! The weight seems to help a lot, on Penbits bogies they're even better too!
James Wells

Ah ha, the famous Mostyn "Tubby Duffs..."
Still going strong and doing a fine job...
I don't suffer from insanity, I enjoy every minute of it....

In the 7mm thread there's talk of loco's in that scale having mass that 4mm doesn't have. However I think the heljan 47 is a fine example of a 4mm loco having mass.
Top

They do look good!

dave_long wrote:In the 7mm thread there's talk of loco's in that scale having mass that 4mm doesn't have. However I think the heljan 47 is a fine example of a 4mm loco having mass.

I'd agree with you here!
James Wells

The next class 37, this time a 37/0 is already taking shape.
James Wells

Hope you all have a great Christmas!

And may the day bring you many train shaped gifts and may annoying relations be kept to an absolute minimum!
James Wells

A amen to that. I've got two days all to myself while family are away. Two days of fighting a Brassmaster 4F inside motion. Ho Ho Ho.

Merry Christmas to you too James, and Suzi and Thomas as well.

Nice surprise on the rolling road at Padgate Works.
Few other titbits as well.
Hae a guid James and I trust the clan is well; junior engineman and all.

Slàinte agus beatha
I don't suffer from insanity, I enjoy every minute of it....

Flymo748 wrote:Know doubt there are plenty of train-shaped objects in both of your stockings

Nothing train shaped in mine but looks like C&L did quite well out of Christmas by virtue of the track supplies I now have ready for my layout!

Abbie got a nice little stocking filler though -

She sneaked upstairs (she's not subtle so we knew and i followed her!) and was found on our bed trying to open the net bag it came in so we could put it together!
James Wells

Return to “On My Workbench”