If you are making something new or have found something, announce it here.
Post Reply
285 posts

Thought I'd seen that picture before.... Not quite but it did remind me of this.

Caley Coaches kits, some with new turned chimneys and added extras. Two in OO, one in EM and one in P4 which is pictured on the Caley Coaches website.
Back in the day when I was still able to do these things in batches.

The 3D prints are fantastic though, what tenders are you doing to go with them?

Thanks, the 3000 Gallon one although may do more too.

Caley ones look good, especially in that primer.
“He who dares not offend cannot be honest.” Thomas Paine

CR 812 4mm Body Shells: I'm now ready to accept 3D print orders for those whom it may interest.

Riveted and non riveted, also specify 00, EM or P4 as the cab splashers are set accordingly. Chassis and tenders are still in development but for now the bodies are available. Will finish off the 652 bodies too. 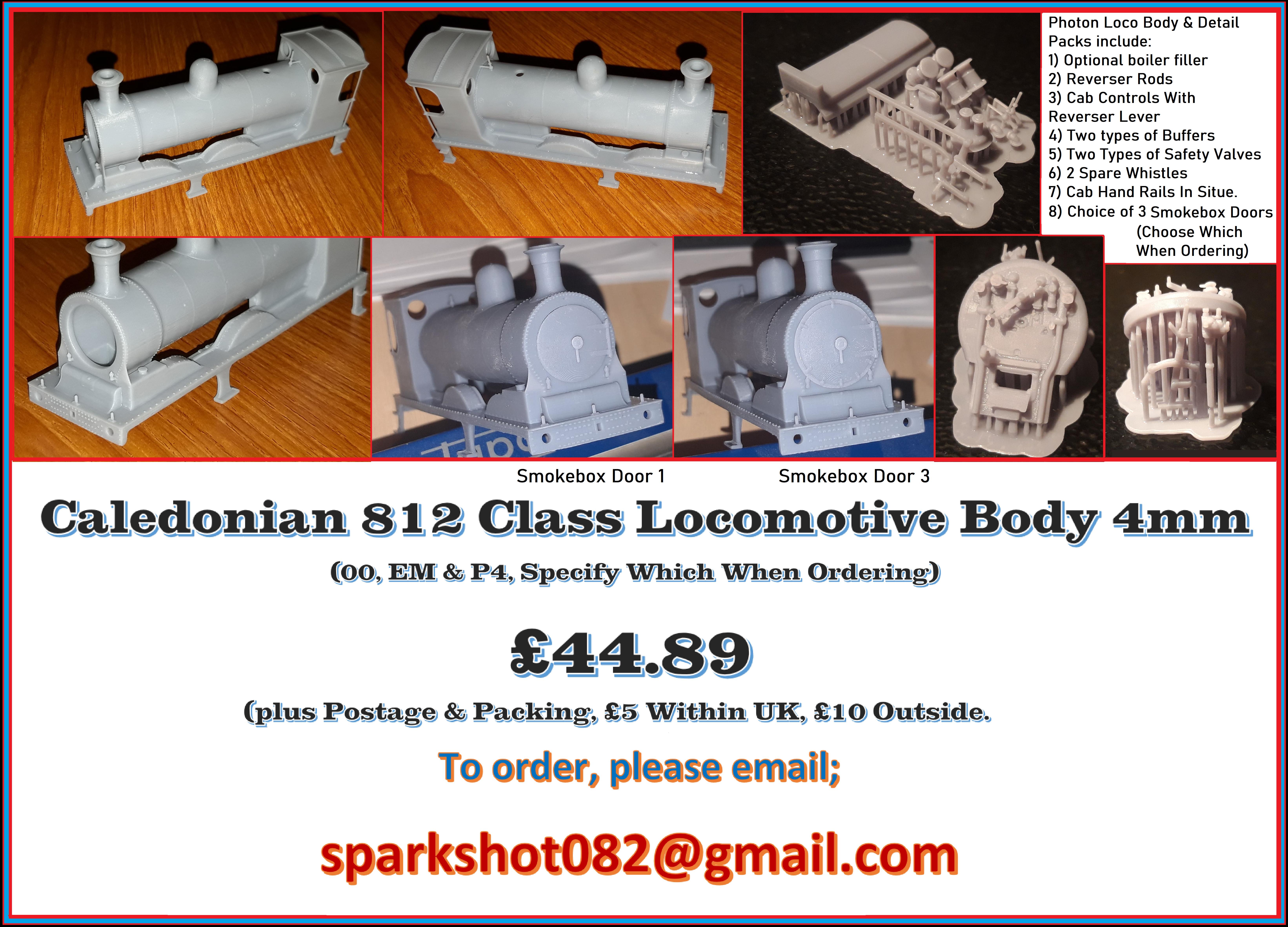 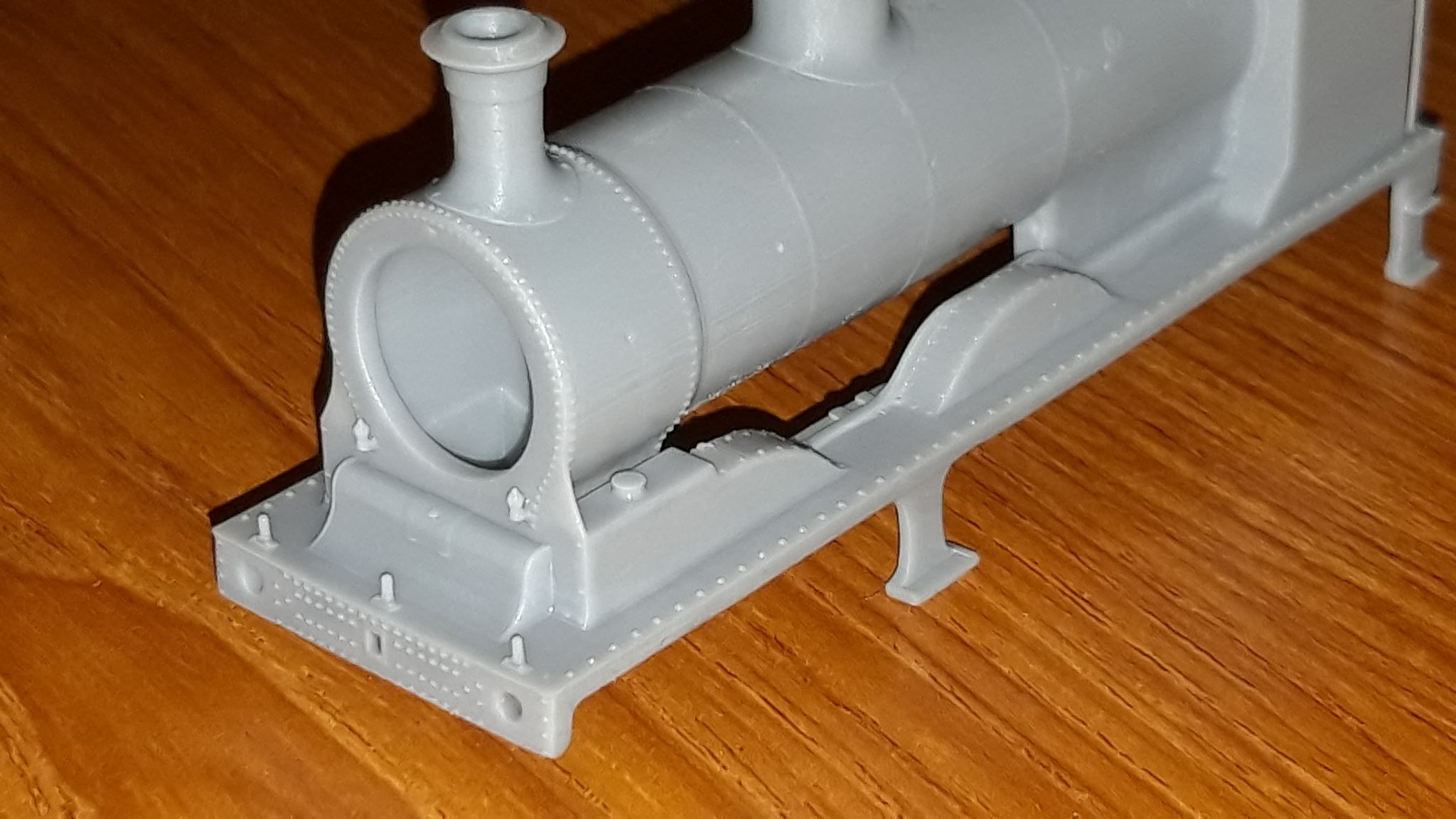 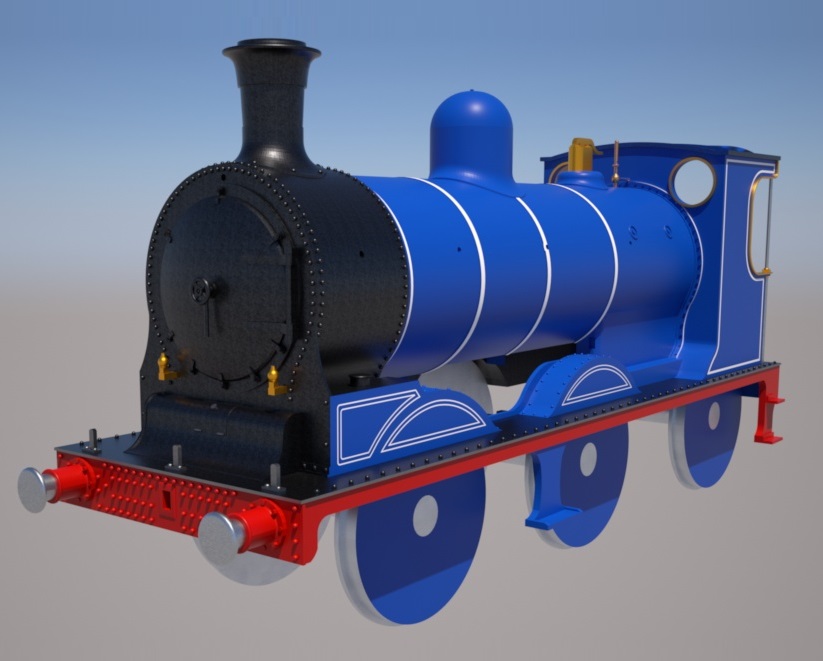 As a reminder: For those of you in various online places who have expressed confusion and wonderment as to why I set out to make the 812 when there is a brass kit and an RTR model coming along;

as said before, ultimately I want to build 4 of these so it's a lot cheaper for me to do my own, on top of that the plan has been in my mind for around a decade so it isn't anything new.

Further more, I can re-scale these up or down if there is any interest so from my perspective it makes perfect sense.

Note: Considering Dave Bradwell's view on the boiler bands I have reduced them to 0.1mm as seen in the photographs which although a tad over-scale still, are closer than what a lot were, previously at 0.2mm. Making them much smaller will likely render them mushy on the prints.
Last edited by Knuckles on Tue Oct 01, 2019 7:06 pm, edited 1 time in total.
“He who dares not offend cannot be honest.” Thomas Paine

I'd limit portrayal to LMS or BR days as round headed rivets, dogs on the smokebox door, and lamp irons (other than on the top of the smokebox and cab sides) were not features in the Caley era.
Top

Yeah I know, this is just a quick render to give an impression, not an attempt to show an accurate combination. You'll also see I didn't finish all the livery details for the same reason. A nice blue and white render looks better than boring black.

The body comes in riveted or non riveted form and there are 3 smokebox types; no lip, lip and lip with dogs as in the render.

Lamp irons are not modelled on the smokebox top as it'd foul the rivets for the printing tolerance thicknesses needed for a resin lamp iron. I'd expect these to be cut off and replaced by etches from most anyway.

I have swapped the safety valve and bunged a number on and painted it black. Again, just for a quick impression. 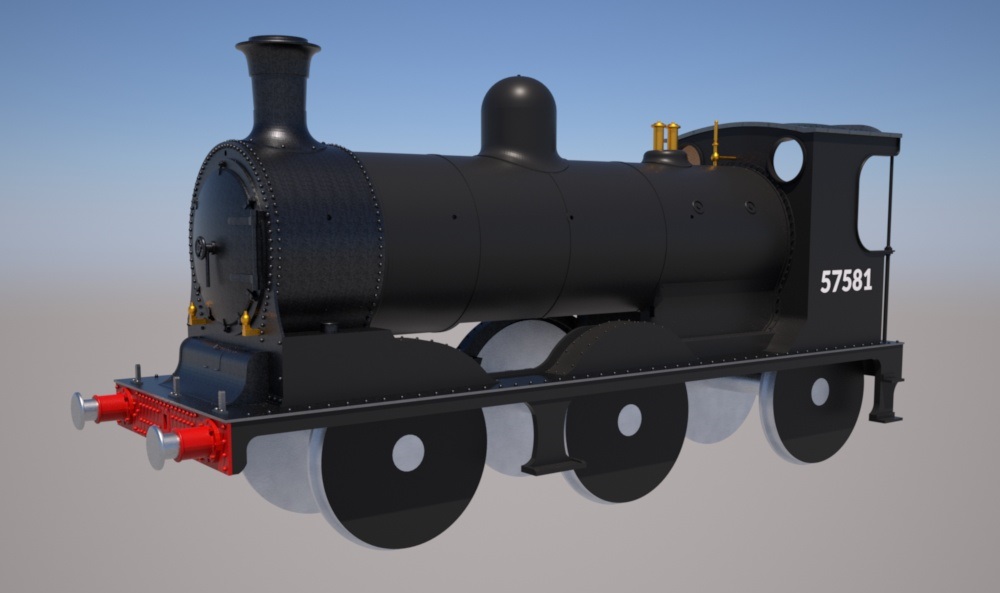 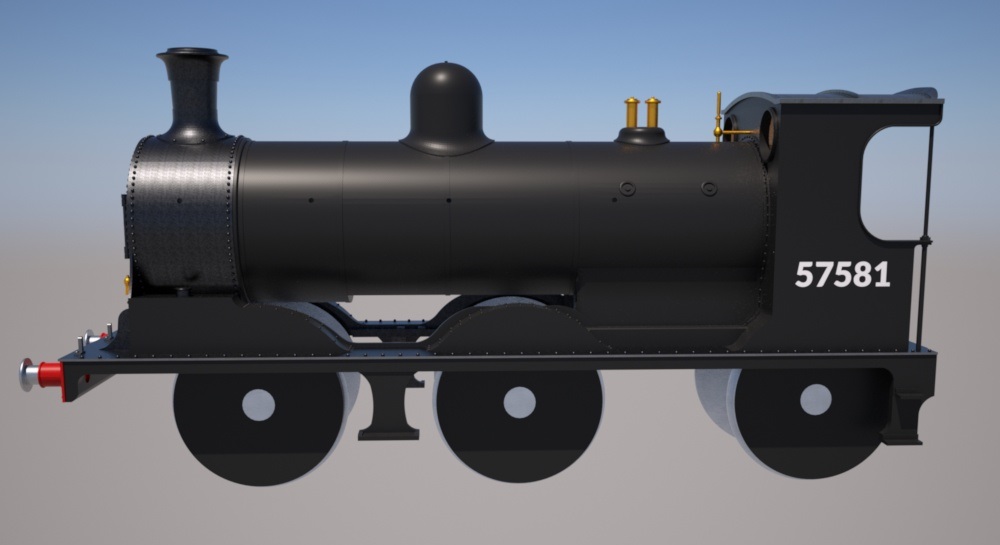 Apart from a few things I'm still part way designing will be taking a break from new stuff as I am bottle necked with a few half completed 3D print loco's on the desk. Built another HL gearbox today for one. (55 minutes, not bad) Must get them finished. Want some nice new shiny pics and loco's finished fully for the new layout/s.

Loft work is still slowly going forward in preparation for the next layouts although at a trickle, roof still leaking although we have almost sorted it.
“He who dares not offend cannot be honest.” Thomas Paine

As well as working on the 812 tender and other bits, also doing a few commissions,

Progress on the USA Scotty is coming along nicely, ultimately it is being done as the client wants a H0 model but it's agreed to release things in 4mm too.

3.5mm H0 Scotty is released.  4mm one following in a day or two once everything is uploaded.

On the Photon can print everything bar the loco bodies at around 50% of the price although I haven't yet calculated the costs exactly but roughly that.

Loco bodies are a Shapeways only purchase currently due to the Photon being a smaller machine.  Will be buying a 2nd one soon.

Getting there, modelling desk is a bomb site too.

​
“He who dares not offend cannot be honest.” Thomas Paine

Photon 3D Prints for bodies are £32 + postage, chassis Shapeways only (FUD/SFDP) & there are double pack offers for the whole sets too, bit pricey though. 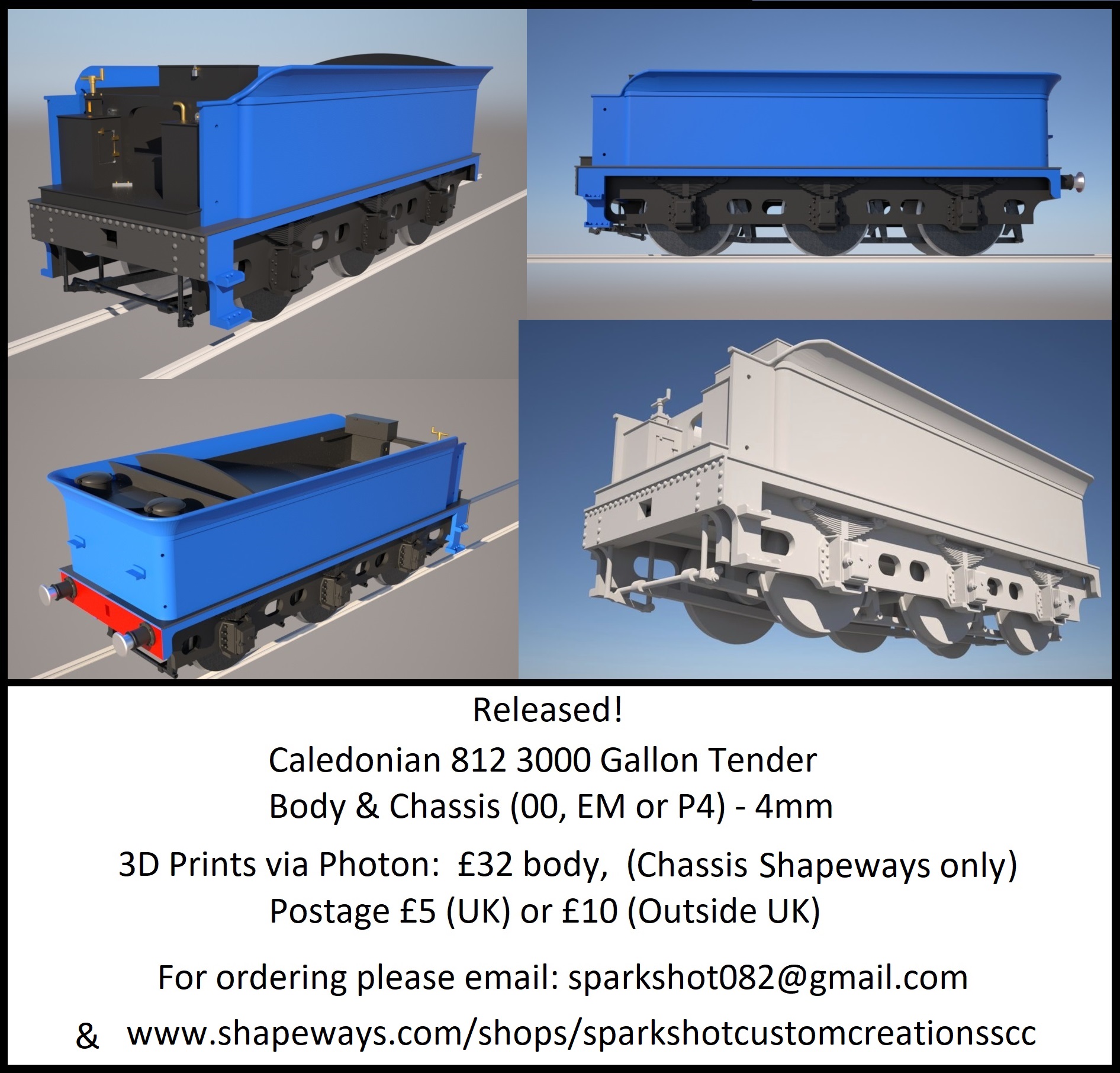 Also have two Anycubic Photon's now, much easier!
Last edited by Knuckles on Tue Mar 31, 2020 8:27 am, edited 1 time in total.
“He who dares not offend cannot be honest.” Thomas Paine