A forum for participants in the Standard Gauge Workbench.
Post Reply
63 posts

Noel wrote: Indeed; some idiosyncratic and interesting buildings, of significantly different vintages and styles. I presume that the small warehouses back onto the river?

The real small warehouses back onto Tower Bridge Road. They're not very interesting on that side, but the Horsleydown Lane side is more picturesque. On the layout there is an off scene road behind the backscene that these are on. I don't think they have any direct access to the goods yard.

I was going to a meeting in that vicinity this morning, so on the basis of your post I took a slight diversion...

Yes lovely buildings to model. The cranes all seem to be the simple type. We often had them on distilleries up here. I have a model of one on Dubbieside which was based on one which was at Cameron Bridge Distillery. - It was steam operated and had cylinders etc. attached to the outside wall. Unfortunately I never witnessed it in action.

Clearly the buildings are going to make a superb frame to the operation. It is good to add a few simpler buildings to the set up as it will give a change of tempo to the scene and keep it from looking over busy. You should have a lot of pleasure creating this scene, particularly if you enjoy making buildings. Looking forward to seeing this at a show sometime. Nice to see the North London being used as a starting point as well - a much neglected but interesting railway.

As so often happens with my modelling, I was going along on a project and suddenly felt the overwhelming urge to do something different. I realised that Queensbridge was never going to be finished if I didn't actually work on it. So I went and had a look to see if I could find a suitable project. I decided to start on the fiddleyard end with one of the two buildings. In the back corner will be a pub. I have some ideas, but this is the only structure I don't yet have a prototype for. So the obvious solution was to start work on the other building at that end. This is a small brick warehouse based on a building in Limehouse. Last summer I started work on one of the other buildings using a plywood core with Slaters brick sheet attached to it. This may work for some people, but I didn't find it successful. Windows are always where I seem to have trouble. So for this new building I decided on an all-styrene approach. Previously I have had difficulties fitting etched windows to brick sheet. The problem is always the arch. I love the look of arched brick windows, but they're problematic to make. I've finally settled on a solution that will work, make the windows to fit out of styrene strip. It's not done, but so far it's working. 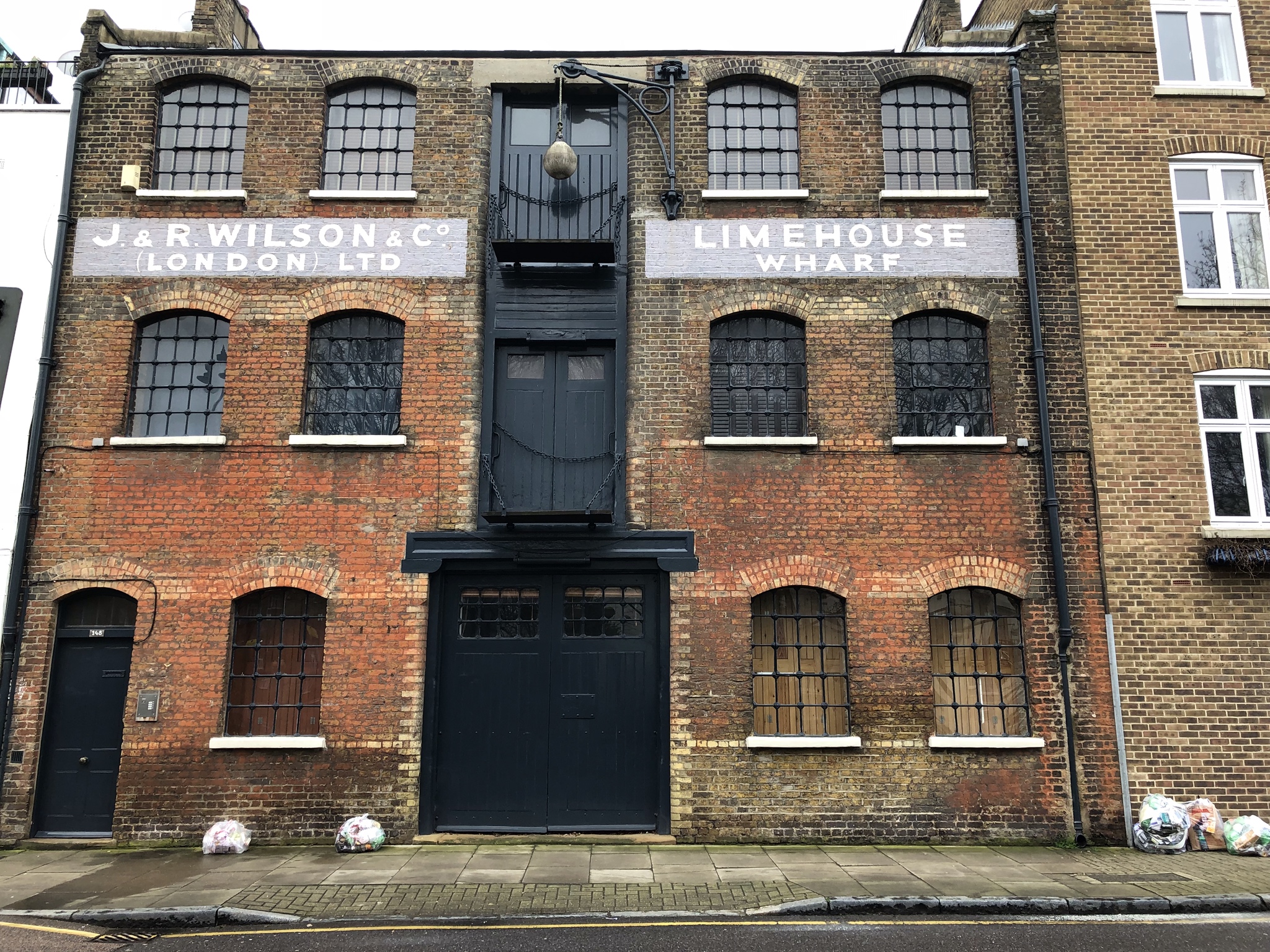 So to actually build the structure, I started with a rectangle of brick sheet cut to the correct size. When I photographed the building I used the measure app on my iPhone to estimate the height of the building. From that I made the width to fit the space and the proportions looked good. I marked out the approximate locations of the openings on the sheet, then set about making arches. I figured it would be easier to make the openings fit the arches than the other way around. I took a strip of brick sheet, two full bricks wide, and cut two thirds of the way through between each brick. This made the strip curve and allowed me to further curve it to fit the desired shape. I looked around for a small round object to use as a guide, so they would all be consistent, and settled on the cap for my bottle of flux. I cut the arches to 16 bricks long, curved them, and glued them to 0.010" sheet. Once cured I cut out the arches and trimmed the backing sheet. I left extra material above the arch for attachment, but the other three sides match the arch. 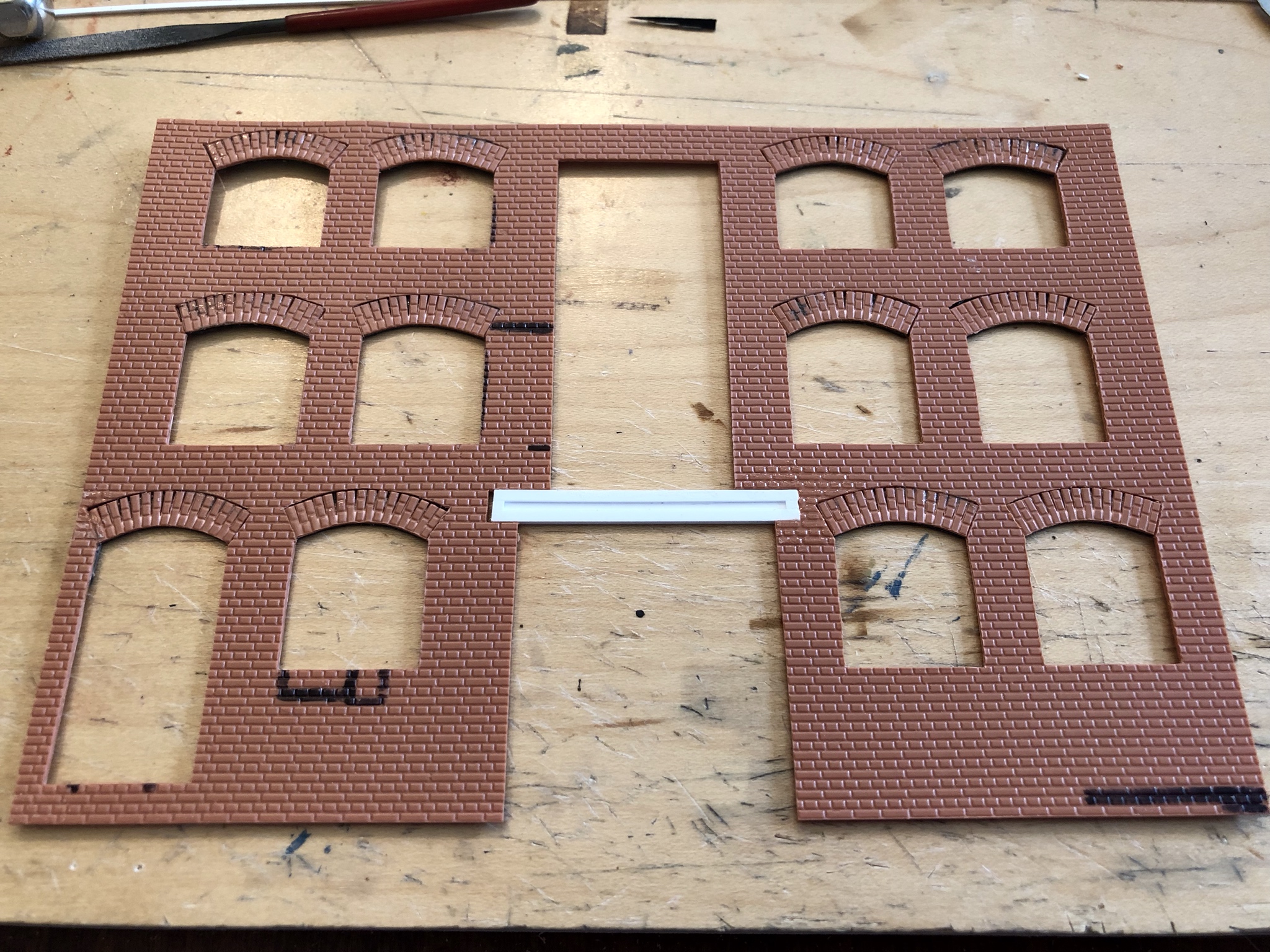 Using the arches to guide the width and a photo to guide the height, I cut out 11 windows and 1 doorway. I also cut out a section in the middle for the three freight doors. There were inevitably gaps around the arches, and these have been filled in with putty. I then used 0.030" strip to block around the window openings, and then attached a sheet of 0.040" styrene to the back of the wall. Once the windows had been opened out again, the wall was mostly done. The two side walls are of similar construction, brick sheet on plain styrene. The windows are the next step, and that will be a separate story. 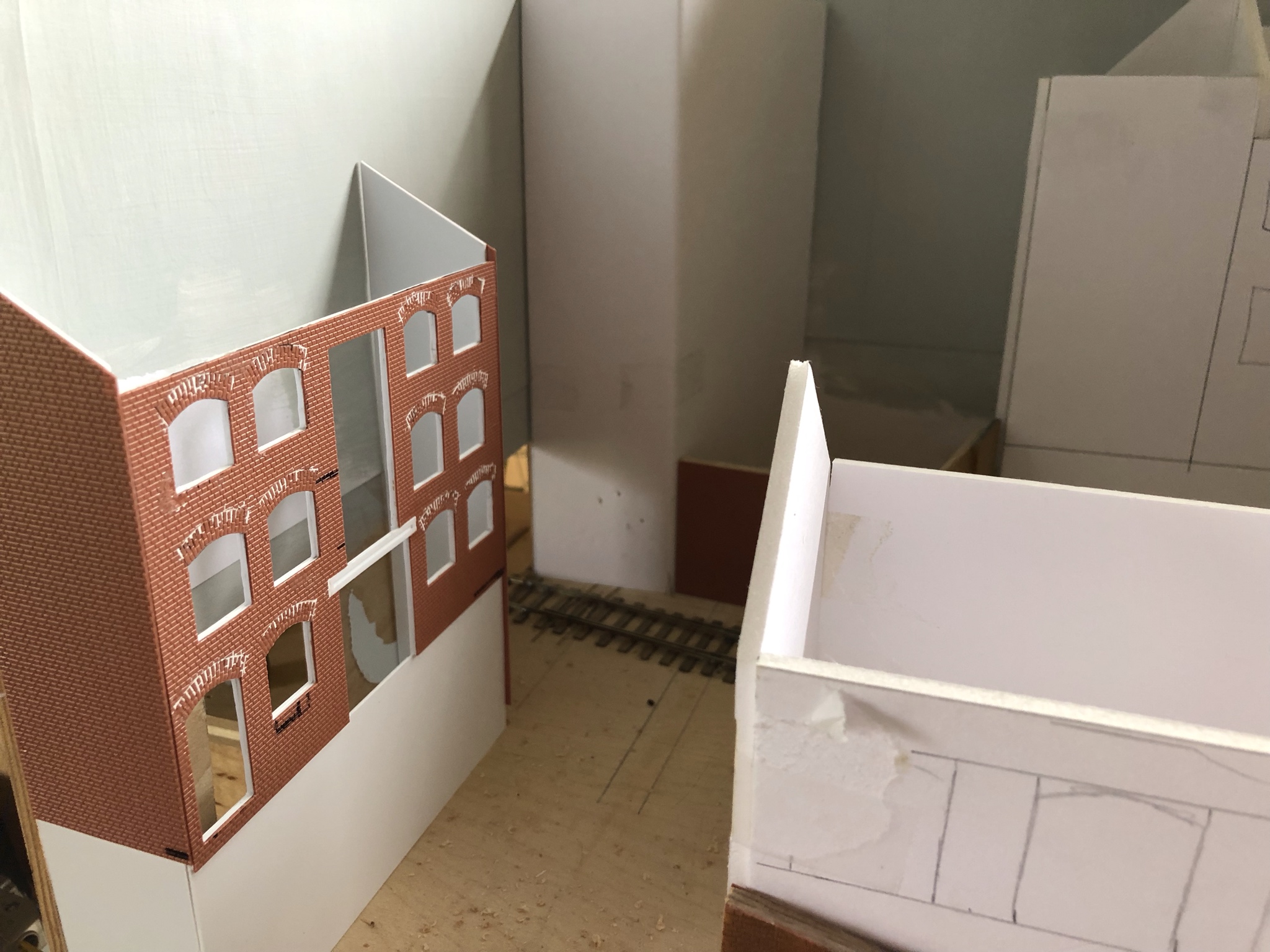 Do what you can when you can has always been a motto of mine- there will always be something to do, this building is coming on well and I love the colouration in the original as well as the design, Very nice.

I have built a few warehouses in my time and one or two of these cranes, including a steam operated one, which is a bit rarer.

Getting something done will always spur on the work, no matter what you are doing.

The red brick mixed into the stock brick suggests a drastic repair. Was it wartime damage?
Top

I would suggest not. Wartime damage usually burnt out the buildings and left the walls unstable; the outcome was usually demolition not repair. The style of the building is consistent from top to bottom, suggesting that it is all original. Also, you can't really repair the middle of a structural brick wall without replacing the top. Looking at the image it looks as though the red colour covers yellow brick in at least some areas, suggesting to me that it was applied externally at some point in the life of the building.

Since writing the above I've established that it is a Grade II listed building https://britishlistedbuildings.co.uk/101241331-148-and-150-narrow-street-e14-limehouse-ward#.XOkoTfZFxhF, again suggesting that it's original.
Regards
Noel
Top

Since the mortar is only visible in the stock brick sections, I think it’s some sort of paint used in the red areas. If they were actual red brick I would expect to see grey mortar lines there as well, but they’re red. I wonder when and why it was painted.
Top

All the wiring is done, aside from the lighting. I had been waiting on the setts until I was sure the wiring didn't need any changes but I have now begun with this project. It's slow going and I'm not trying to rush, no point in needing to redo it. I've been spreading thin layers of Das clay. The large open areas have thin foam sheet that brings the level up to about that of the sleepers. I've spread clay in between the sleepers, once that's dry I've applied another layer up to just below the rail head into which I press the setts with a modified paintbrush. 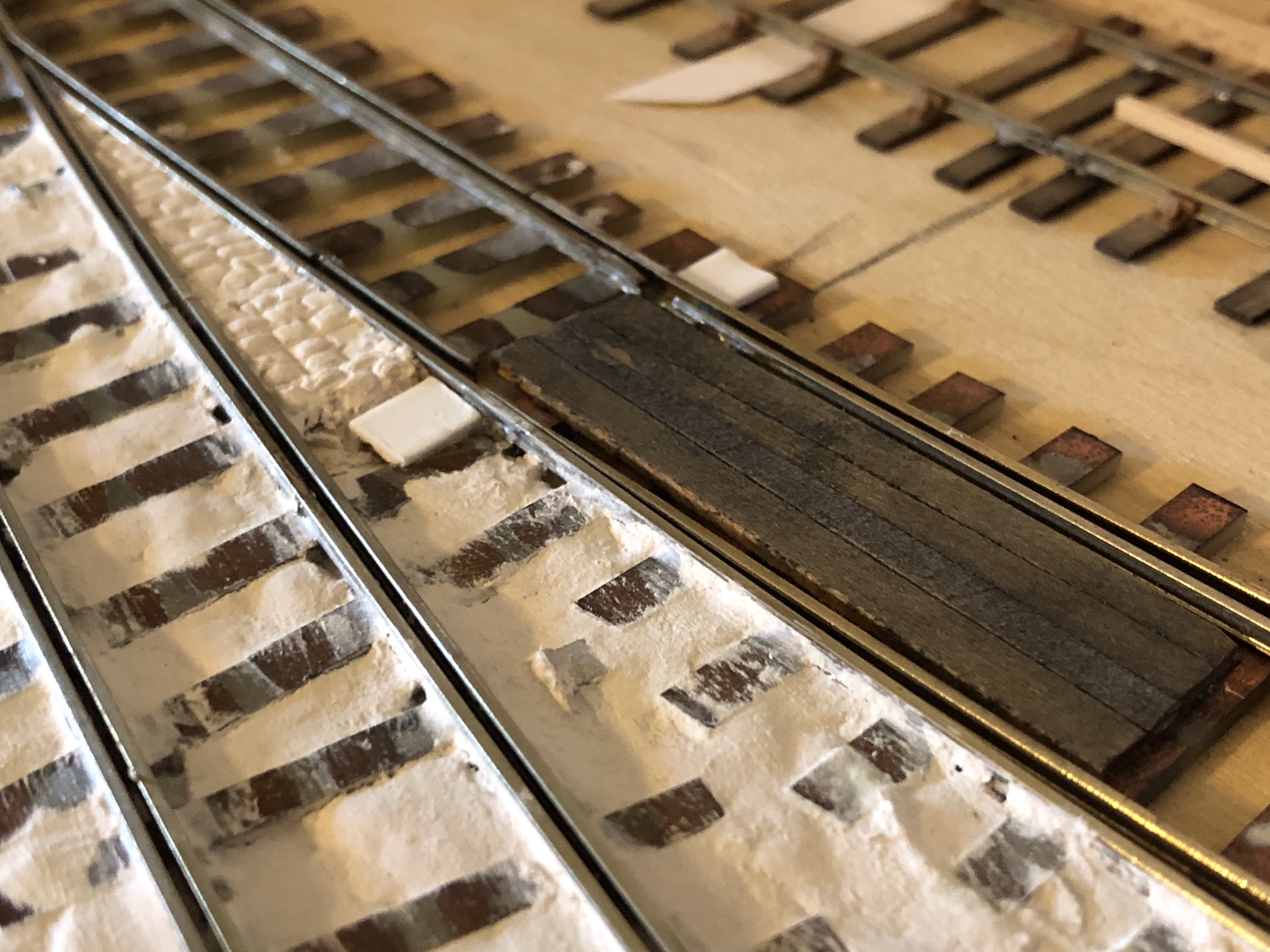 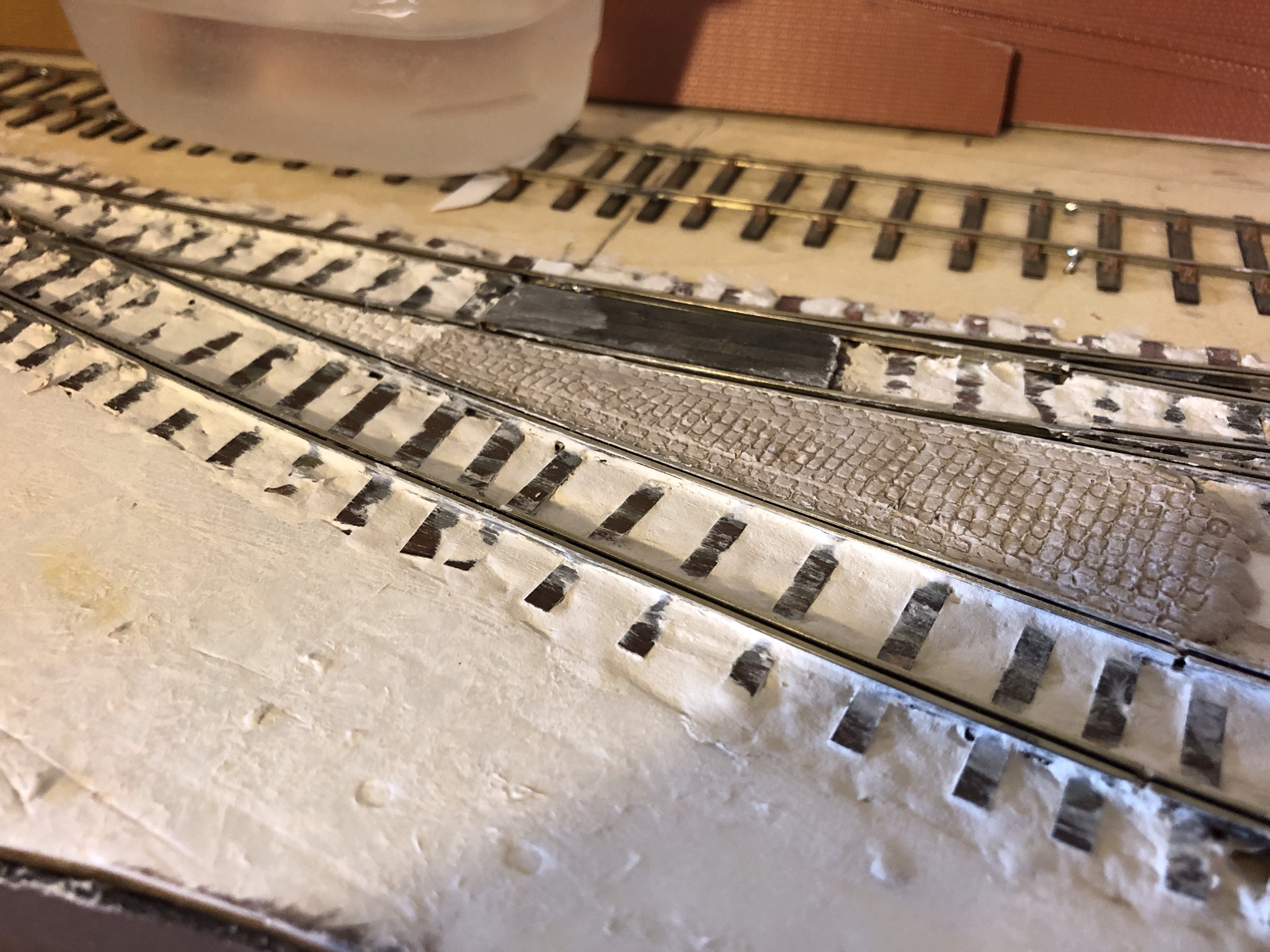 The first warehouse is just about done. Need to finish the roof and a couple of details, that’s it. The windows were all 3D printed. 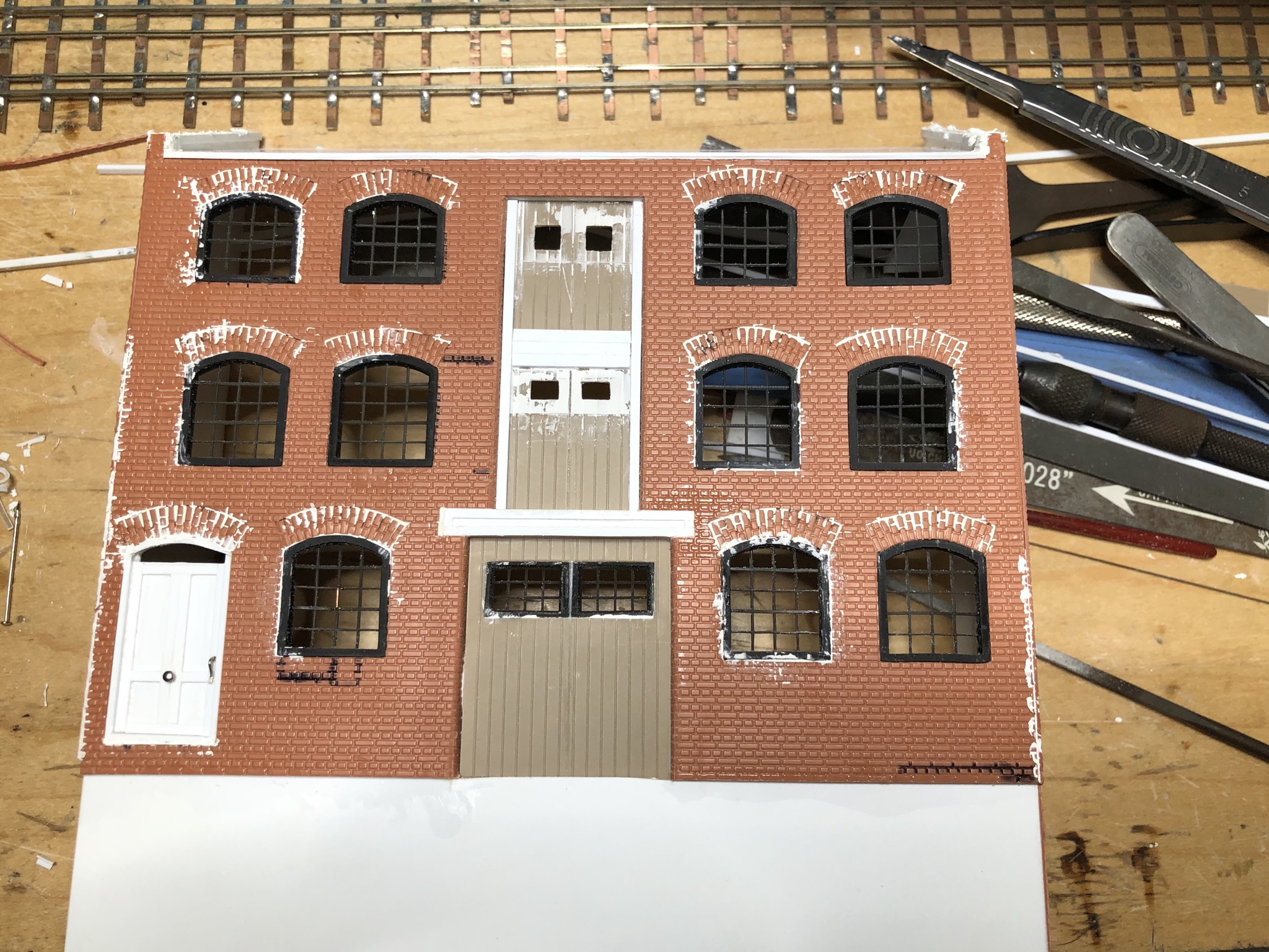 One of the challenging areas recently was curving the bricks into the doorway openings. I did this by creating a short bit of wall entering the building, rounding over the corner with a file, and then chasing each mortar course with a square needle file. It was rather tedious but the results were worth it. 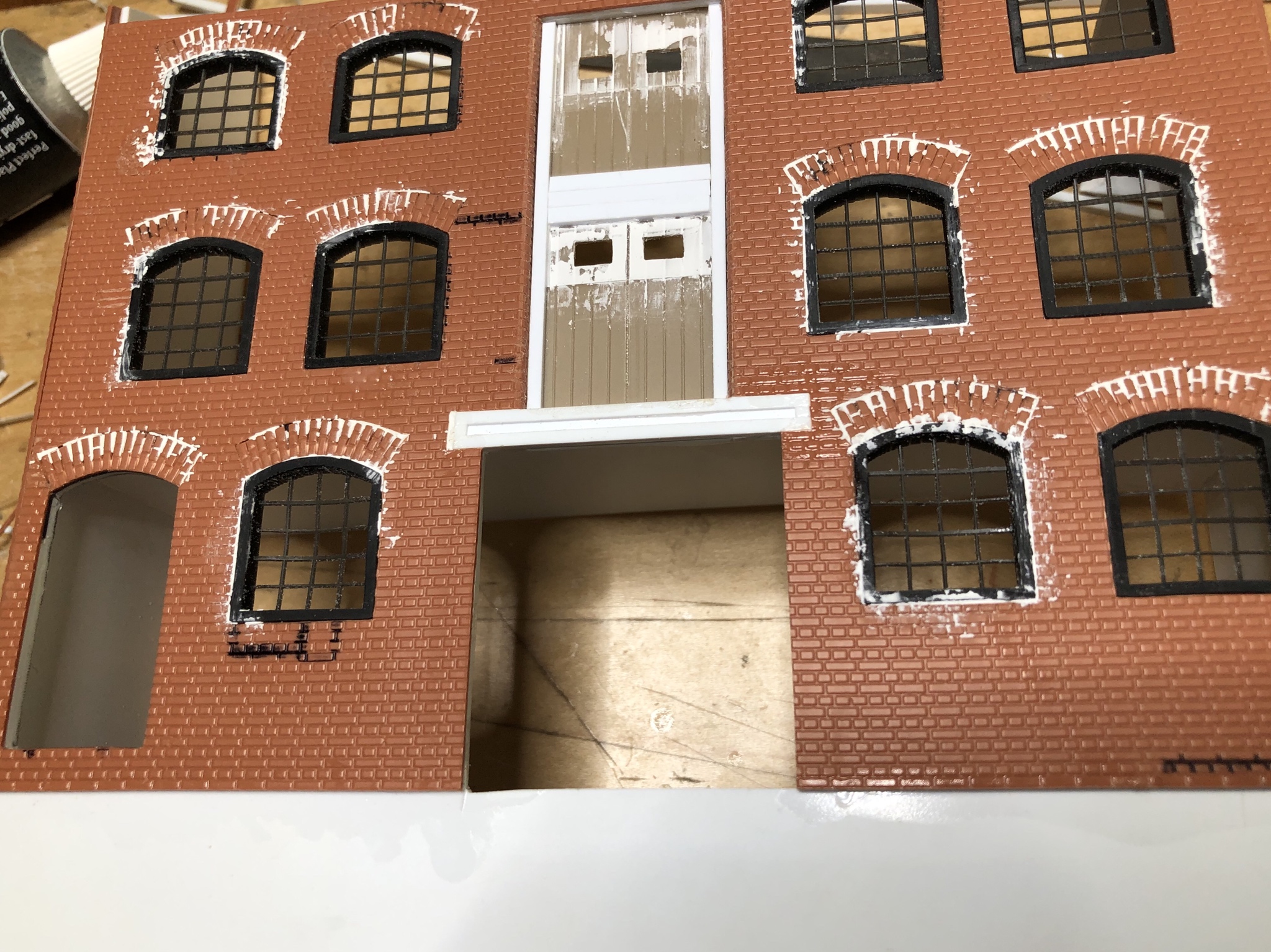 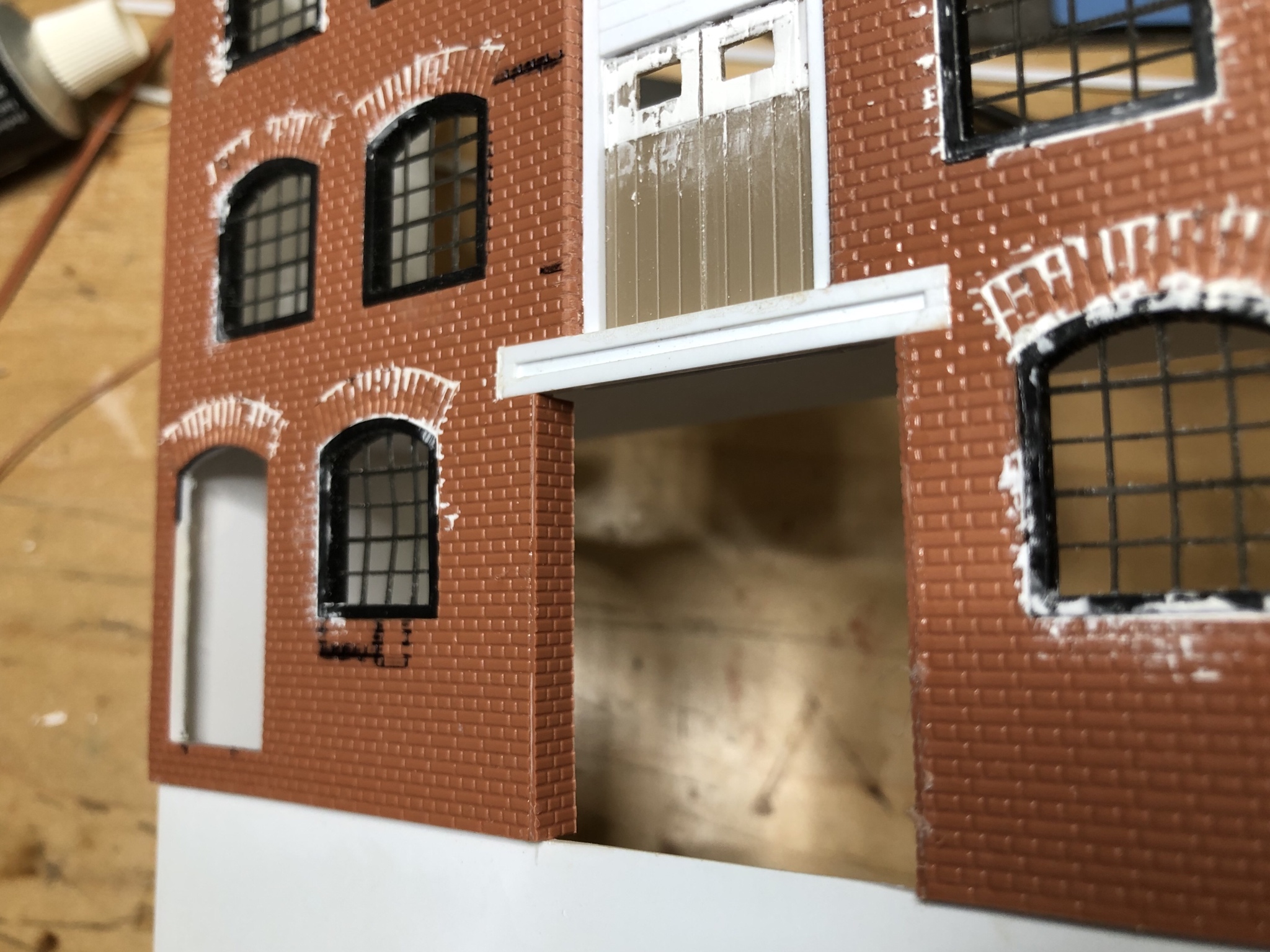 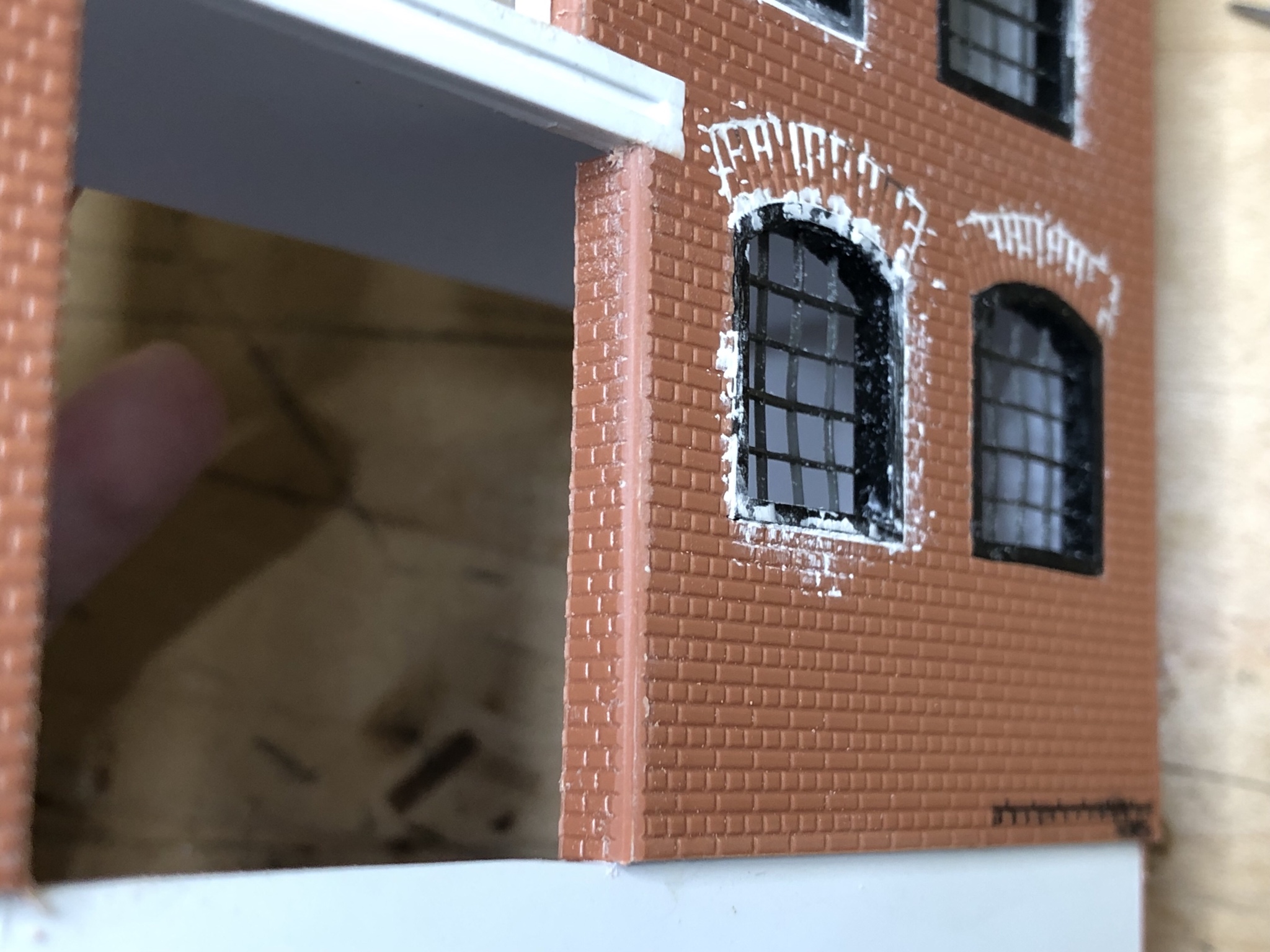 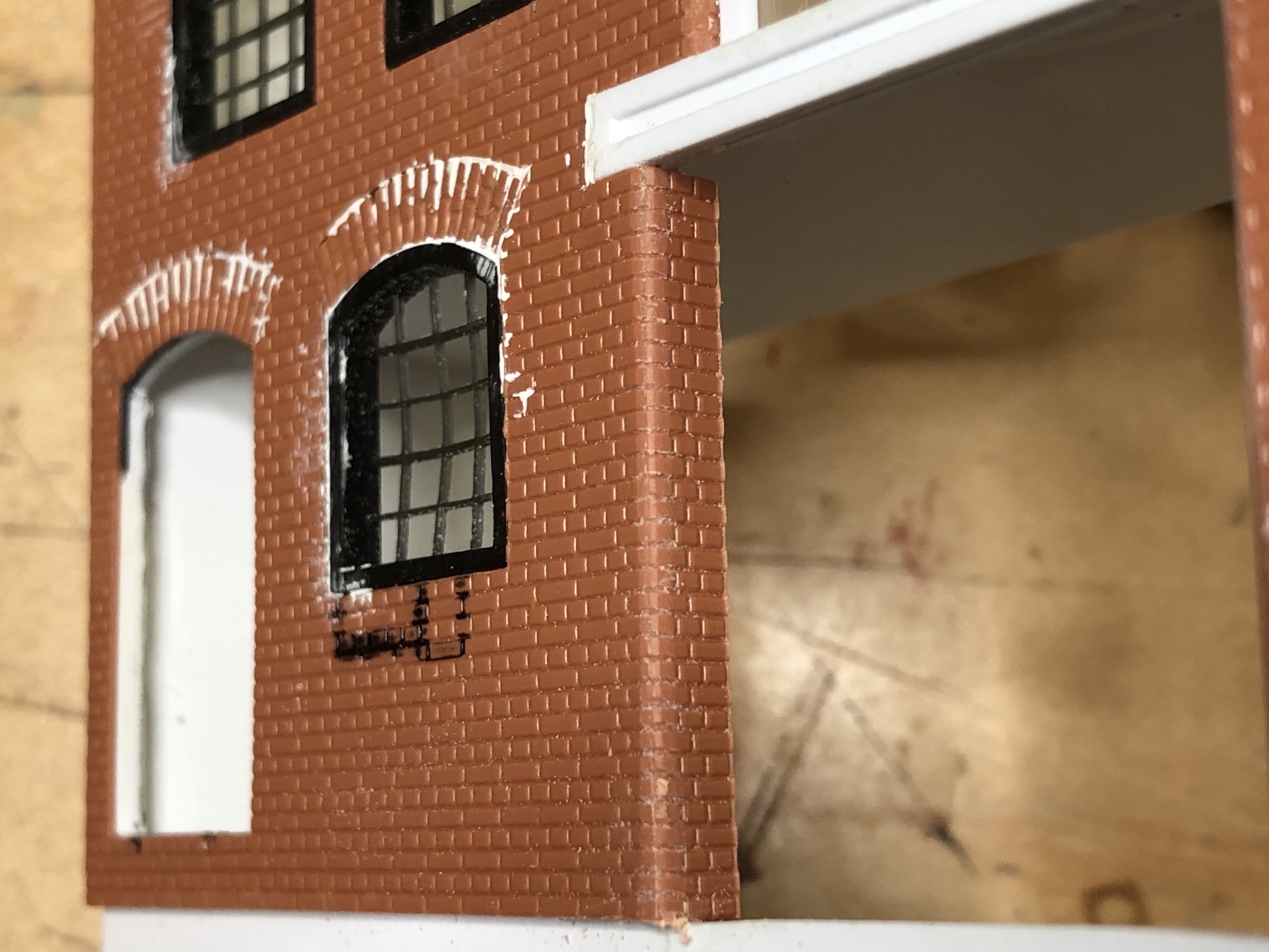 In position on the layout. The road is next. 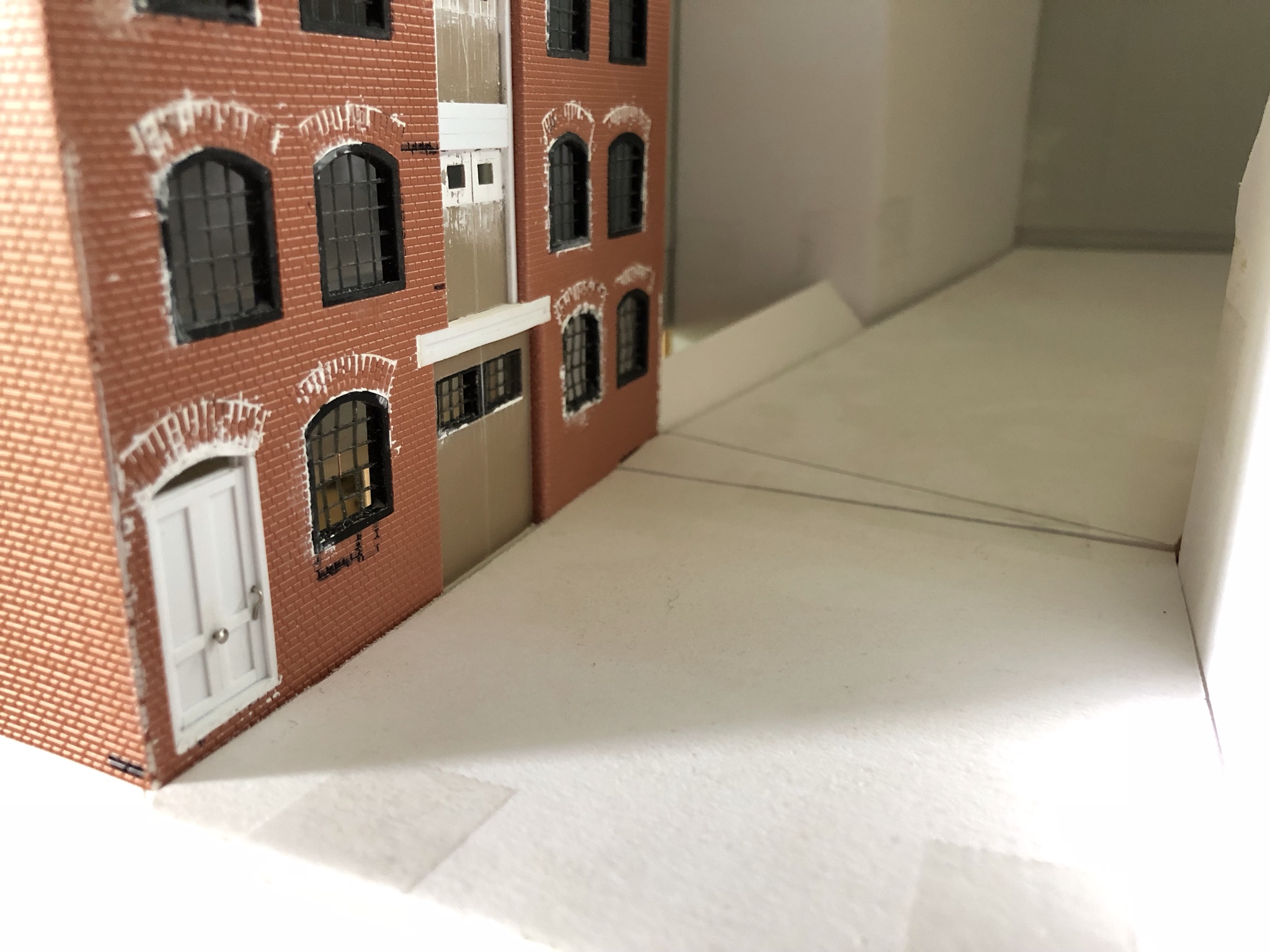 The small door would have had a visible lock; even if there was nothing particularly valuable inside, theft and arson would be known risks which insurers would want addressed. The double doors can be assumed to be secured inside, the small door being the final exit door. Also, the small door would have a means to deliver post - the prototype door has a letter box towards the top of the right upper panel. It appears to be a 1940s/50s one, which is smaller than modern ones, at about 8ins wide.
Regards
Noel
Top

Noel wrote:The small door would have had a visible lock; even if there was nothing particularly valuable inside, theft and arson would be known risks which insurers would want addressed. The double doors can be assumed to be secured inside, the small door being the final exit door. Also, the small door would have a means to deliver post - the prototype door has a letter box towards the top of the right upper panel. It appears to be a 1940s/50s one, which is smaller than modern ones, at about 8ins wide.

Thanks Noel, I’ll look into this and add those details to the door.
Top

Good to see the building progressing, haven't made any new buildings for my new layout for some time, but this inspires me to have a go at the works building, not quite so characterful as yours, but quite a sizeable affair - there will not be any photographs for a while as I progress other aspects of the Wemyss layout. Your layout and buildings would be interesting to light up for night scenes, I was wondering if you were considering this?

Allan Goodwillie wrote:Good to see the building progressing, haven't made any new buildings for my new layout for some time, but this inspires me to have a go at the works building, not quite so characterful as yours, but quite a sizeable affair - there will not be any photographs for a while as I progress other aspects of the Wemyss layout. Your layout and buildings would be interesting to light up for night scenes, I was wondering if you were considering this?

I had actually been considering some layout based lighting. I suppose now is the time to add lights to this building, something on a bracket I suppose. There is also a building right in the front that will probably need an interior, it has lots of large windows and it will be very obvious if it’s empty inside. I’m not sure what lighting the yard itself would have, any ideas? Presumably gas lit, but just a light on a pole? More things to research...
Top
Post Reply
63 posts

Users browsing this forum: No registered users and 0 guests