The Group represented the Society at the Aberdeen MRC's exhibition held over the last weekend in October. The stand was manned by Grampian group members Peter Heald, John Anderson, David Jolley and Tony Wickes, each of whom provided display items of track work, gauges, tools and models. David Jolley also provided a lap-top with a 200+ slide show of scalefour models and layouts, which ran throughtout the weekend, and the stand was supplemented by literature and material from the Society's "Stand in a Box" - possibly the furthest north that that has ever ventured?

So that's where all the Great Western modellers have moved to!

Russ Elliott wrote:So that's where all the Great Western modellers have moved to!

I believe they would look at it as being missionary work!
After all a couple of 16xx panniers made it to Dornoch.

Gordon A
Safely in Bristol
Top

You have to blame Tony Wickes for the GW stuff. We've tried to speak to him about it, but because his models are so exquisite and, perhaps more to the point, run so beautifully, we can't really find any valid objection. Indefatigable as ever, Tony is currently trying to persuade the rest of us to adopt a GW station track plan for our proposed GNOS layout.

To supplement the S4 presence at the Aberdeen MRC show 2012, the Grampian group will be attending with a short layout - Clatterinbrigg. Based on a Great North of Scotland station it will be used to display a range of P4 modelling from the group members.

Perhaps we should also say that the Exhibition is open from 10am to 5pm Saturday and 10am to 4pm Sunday. We look forward to seeing you there.
Top

After fighting through the first (and second) blizzards of the winter the Scalefour presence in Grampian is in place.

The Society stand and layout have completed a first successful day at the Aberdeen exhibition. Numbers through the door appear to be up on last year and there has been much more interest from modellers. A mix of track and stock showing comparison between P4 and 00, along with some of the raw materials is catching the attention;

And having the stand sited next to the layout allows us to crew both at the same time with our limited resources.

So far it has been a very enjoyable weekend - lets hope the weather holds out.
http://thesulzer27.blogspot.co.uk
Top

Day 2 complete with only one significant failure. A Heljan class 26 that was bought as a stand-by in case of emergencies developed a serious pick up problem and died. Fortunately the locos it was brought in to cover all ran and a good couple of days were had. 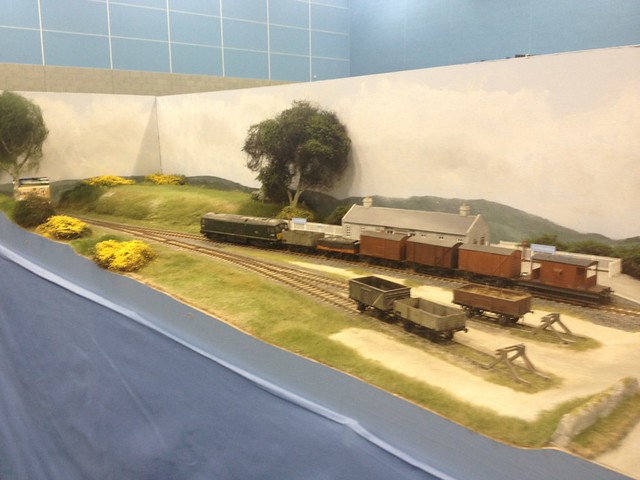 Although there were some strange things going on in GNSR territory;

Tony Wilkes beautiful GWR locos got a bit of a run out, as did this;

The combination of layout and display stand did mean a number of people stopped and discussed P4 modelling, which was really good.

All in all a good weekend. So my thanks go the David Thorpe (for travelling with me through a blizzard), Colin Stevenson, John Anderson, Tony Wilkes, Peter Heald and the Aberdeen MRC for the invitation.
Last edited by John Duffy on Tue Jan 14, 2020 11:22 pm, edited 2 times in total.
http://thesulzer27.blogspot.co.uk
Top

Looks like a very good representation for the Society John. Nice to see that Someone is interested in the fairly recent diesel scene as well.

sulzer27 wrote:The Society stand and layout have completed a first successful day at the Aberdeen exhibition. Numbers through the door appear to be up on last year and there has been much more interest from modellers.

Thanks very much for a write-up of what sounds like a good weekend for the Scalefour Society. Perhaps some of those interested souls will be trying P4 modelling for themselves soon...

On a personal note, that little GWR 517 looks lovely

I've a week's holiday from work, so that has been a nice inspiration to get away from the keyboard and get some modelling done.

Thanks once again for showing the face of the Scalefour Society.
Cheers
Paul Willis
Deputy Chairman
Beware of Trains - occasional modelling in progress!
www.5522models.co.uk
Top
Post Reply
11 posts • Page 1 of 1