This section allows guests to comment or ask questions. Posts from guests require explicit approval (which generally takes a day or so), before they appear, so that we can prevent unwanted spam.
Post Reply
3 posts • Page 1 of 1

I've recently been testing out a Webinar and Demo Video Production home workstation/studio. And it occurred to me that this might be of help for putting the various scaleforum demo stations on line as a live webinar exhibition, with the additional capability of recording them for ongoing future viewing from a website. 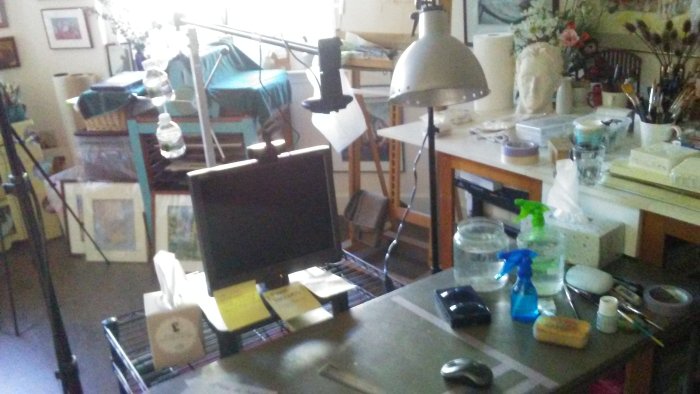 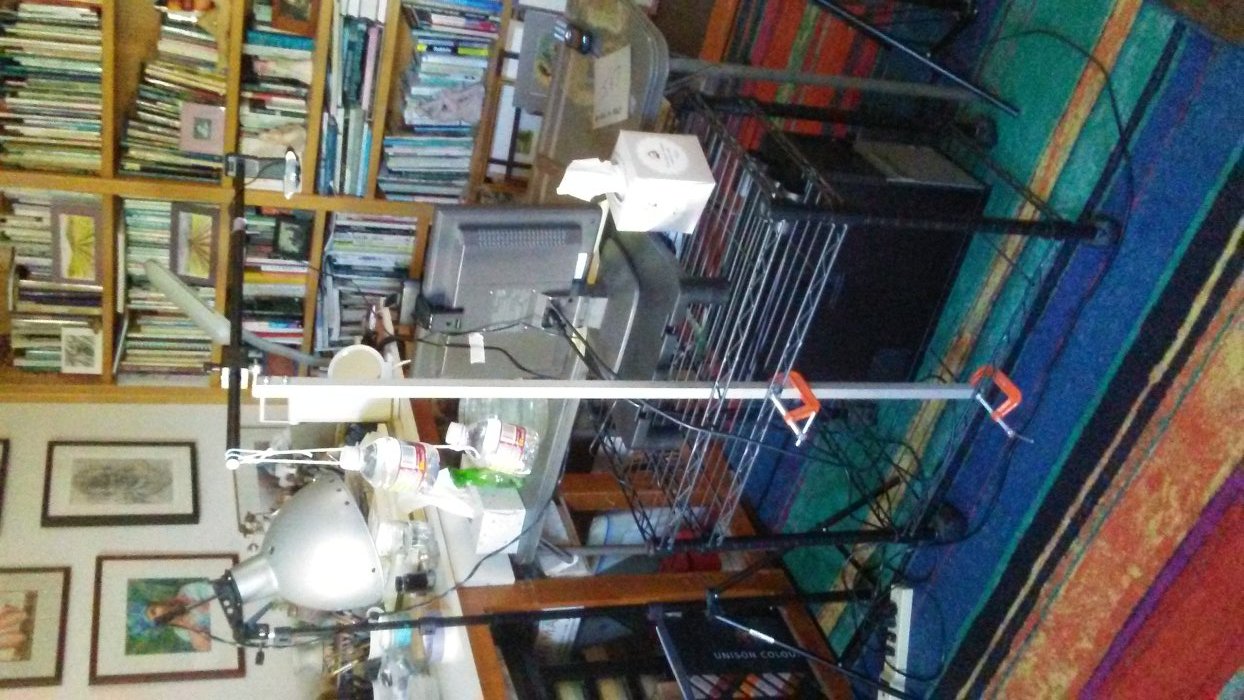 The Pictures show the general construction, which I've tried to make as simple as possible.

I'm using a pretty common office trolley to make it easy to move around. But the same system could be fitted to almost any desk or table.

The trolley holds a Dell 9020 Win 10 PC with a plug in wifi connection to the home router. That has a small monitor fitted with an inexpensive web expensive full HD webcam facing the demonstrator. A second identical HD webcam is hanging downwards over the desk demo area, on the end of a 42" camera sliding mount pole. (A commercial item from Amazon) . The pole is loosely screwed onto a home made up right post clamped to the trolley back. (The post top has a common small metal DIY angle bracket screwed at the top which holds a locked standard 1/4" camera screw upright for the pole to swivel on).

The particular Webscams are Logitech c920s, which can be auto focused and zoomed by the Free "Logictech Capture" SW, which can switch between ether camera to video stream out and also record the video locally if desired . For now I'm using "Yondo", a moderately priced cloud webinar and video rental combination App, which has a video streaming server that a convenient number of viewers can log onto as live participants, or which can hold recorded videos (or recorded past webinars) for to view individually at a more convenient times.

The financial aspects of Yondo may be useful to the Society because the uploaded webinar streams can be charged for to the participants and recorded videos can be subsequently rented to any number of viewers for preset lengths of time indefinitely . Both situations would allow the society to recoup the upfront costs and over time, possibly make a considerable net ongoing income.

Even if only a very few demonstrators were able to have their own or society provided loaned set-ups and work from home, many of the scaleforum demos could be pre-recorded and only released at show time. I also think that the second "table view" webcam could be substituted by an ipad or quality smartphone to give or record a layout tour of that particular home layout.

Anyway, this posting needs not be too detailed, as Yondo info is available from their website. There may be a UK or even lower cost equivalent that I don't know about. But hopefully this system may help the Society have an effective and safe Scaleforum during this difficult time.

Thanks for that, exactly the sort of thing I've been wondering about. Glad somebody understood. I know this sort of stuff is out there but 15 years of retirement leave me short of real knowledge of where the internet/IT cutting edge is. When my employer decided I was too old and expensive to stay on the pay role we were ahead of the field but one hell of a lot of IT water has passed under the bridge since then.

P.S. Hows the N7 coming on (please no pressure just interested how your fairing) looks like you may have been following other interests.
Will

Glad you see the possibilities. The important benefit I wanted to get across, apart from the technical IT aspects, is that the Society can exhibit and ongoing display its skills, layouts and educational sessions, while still receiving the "admission and subscription" income, and possibly even gaining in the mid and longer term. Youtube is great for showing off, but the content is fundamentally given away, for ever. A smaller group such as a specialist model railway society can't recover it's costs when being that altruistic. Setting up a system where (hopefully) video (streams and/or recordings) can only be viewed for an attractive low price, but not downloaded or copied, solves that problem.

PS. The first N7 prototype chassis proved the concept without needing the time wasting work of being fully assembled. So I have been working on drawing version 2 which may end up waiting for UK etchers to reopen before it can be implemented. A practical version of the 16 Ton mineral chassis however is ready for assembly and test - as soon as I get the time. The present crisis has freed up my locked-in spouse to add and watch over many, many, tasks added to my "Honeydew " list.