If you are making something new or have found something, announce it here.
Post Reply
302 posts

This project has resulted in me kindly being commissioned by Tom’ Waddell to certain specifications.
A Bachmann 04 was lent to me and the task was to make Cowcastchers, Sideplates and an earlier cab that can slot in to the Bachmann model with separate lamps to add to the cab after wasp stripe painting/transferring has been completed. As the base model was on loan the sides and details were not filed down to give the Sideplates a flush fit as I didn’t want to ruin the clients’ model.
You’ll have to simulate a completed finish with your mind, here it’s posed with blue-tack.

Also afterwards full shells were made, quite a lot of prototypes were done before I was happy with all the chassis fixings and quality of finish.

You can use a Bachmann split chassis 04 or Bachmann 03 DCC ready chassis, designed to self-tap the resin, many prototypes were gone through before the correct settings were found, around 7 or 8. Usually can do things in 1 or 2 attempts but not this time.

The bodies turned out well but much better with thick side-plates printed separately, here is a final 3D printed example model minus cab and other details after a quick spray of paint:

Here are some CAD pictures of the Stove Pipe version, you can also not fit the chimney and have just the round base for it instead: 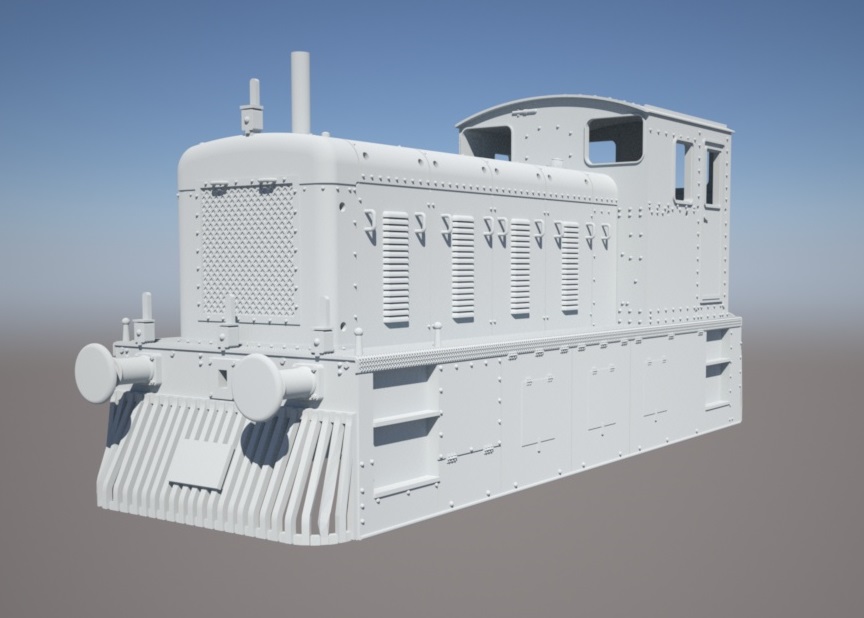 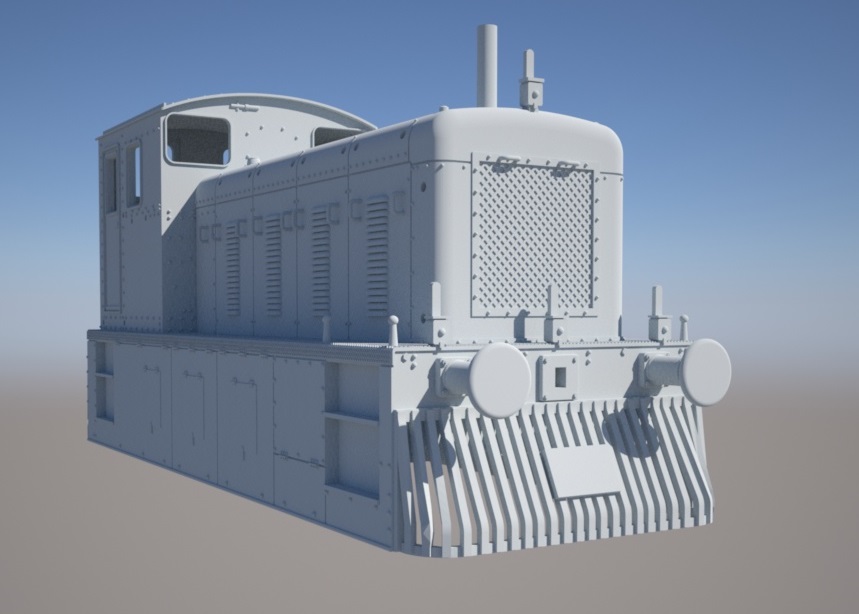 Here are some CAD pictures of the Saxa chimney fitted. I’m aware this chimney with the early cab isn’t likely to be a real world example but it fits the way the character ‘Mavis’ was depicted in the Railway Series books so that will suit a few of us. You can also use the Bachmann later cab with this chimney type for a later real world example. This later cab may be created soon, undecided yet. 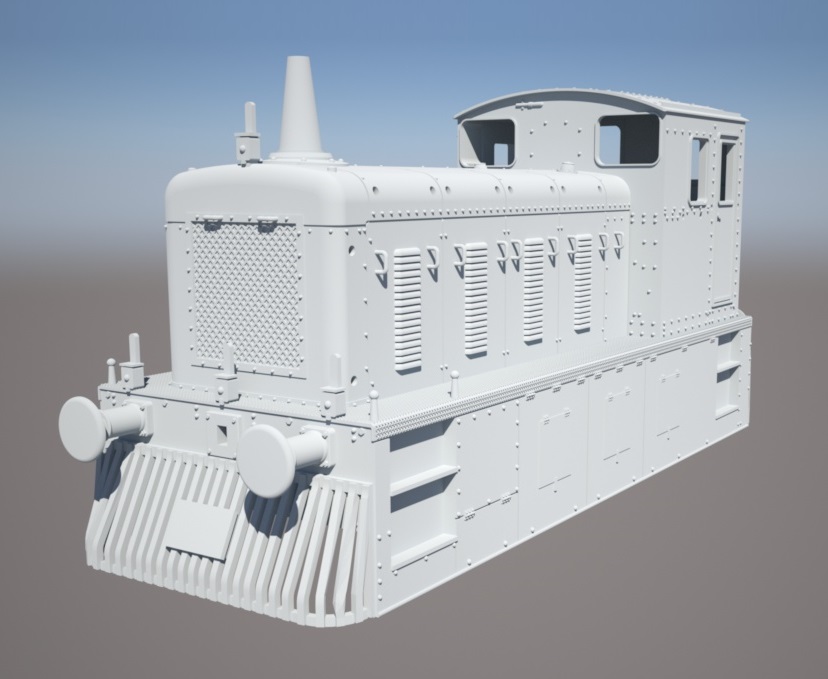 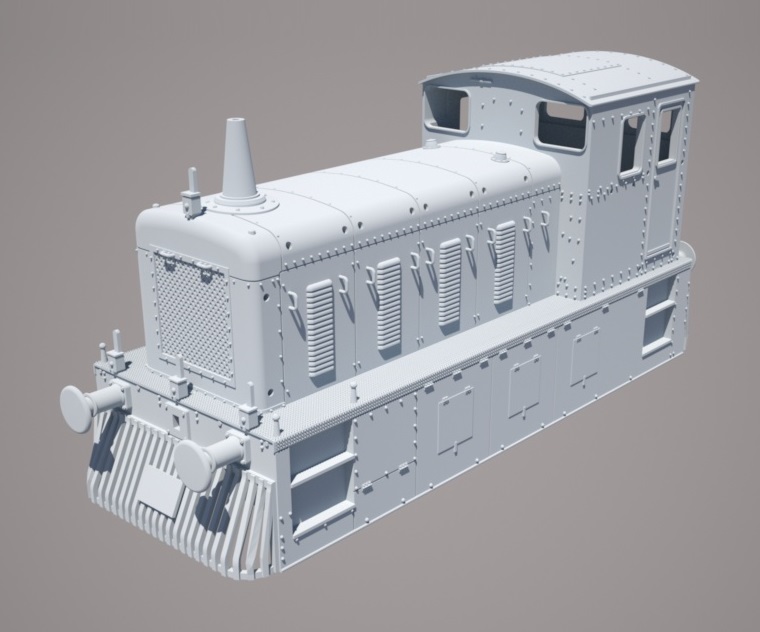 On the non-Shapeways version of the 3D prints the side grab rails have had to be thickened up to fit their printing tolerances, similarly the ‘skittle’ shaped grab rails above the steps have had to be omitted and also the foot grip detail on the running plate. Initially I tried to upload the model to Shapeways with the foot grip detail but the file size was too big for it to be allowed. These finer details are thus reserved for the direct SCC purchase options.

In time other combinations of cabs and body detail variations may be created but for now this is what’s on offer.
With the Shapeways options these are mostly complete shells to help reduce costs, the SCC directly printed ones are in more parts.
Shapeways 04 Drewry Options:
https://www.shapeways.com/shops/sparksh ... Diesel&s=0
For ordering direct 3D prints please email: sparkshot082@gmail.com
Direct prices for the 3D prints:
Cabs, £12
Cowcatchers £6
Thin Sides-plates £8
Thick Side-plates with steps £14 (slightly longer, you’ll have to file more detail on a Bachmann model to fit as these are instead designed for the directly printed SCC 04 bodyshells.

Full bodyshells £44.89
These include a choice of 03 or 04 chassis fixings and Saxa or Stove Pipe funnel options, please specify which. If you’d like to model the locomotive without a funnel you’ll need the Stove Pipe option and just not fit it on. The Saxa options have their funnels pre-fitted.
With this you’ll get the main body, separate cab, separate lamps, separate thick side-skirts and separate cowcatchers. (Separate funnel also if ordering Stove Pipe version)
Postage Rates:
Within UK £5
Outside Most Places £10
Canada £13
USA £17
For a long time I have been getting away with charging a flat rate of £10 for outside UK orders but recently, especially for USA it’s gone up a lot sadly. Found out the hard way one day!

Not every combination of the 04 has been made and most of what was made were to the clients’ requirements so in time there may be more. For now though, this is what we have, please share this around if you like it.

I will be creating a tutorial video series on YouTube showing and walking you through my own build of the Diesel all the way to completion but not for a few weeks at least.

YouTube video showing a lot more pictures and explanations of the refinement process:

Will be filming and doing a tutorial video soon.
“He who dares not offend cannot be honest.” Thomas Paine