I have a bit of a mystery which I'm sure is the kind of thing which will keep folk on the forum thinking during this period of isolation!

I have two photographs of Clare station building. The first published on disused-stations.org dates from 30 August 1965 and appears to show an aerial attached to one of the chimneys for the station masters house.

The second was taken on 5th March 1967 and shows the chimney is now devoid of aerial.

Now I'm working on a 1957-60 timescale for my model so the question is would the aerial seen in 1965 have been put up that early? What form might it have taken? Why might it have been removed by 1967? I don't know when the station masters house was vacated.

Isn't it wonderful the weird directions of research this hobby takes us in?
I might ask this on the MERG forum too though I'm not sure I would understand the answers.

A variety of aerials adorned occupied buildings from the onset of radio broadcasting. However, there was a huge sprouting of TV antennae, starting in 1952, as people bought television sets to watch the Coronation. Most were a simple H design, tuning the signal involved a lot of shouting from the man at the set to an assistant on the roof.

The typical H aerial was mounted on a one inch diameter aluminium mast, U-bolt attached to a bracket which was wire strapped to a convenient chimney stack. The cross bar was of smaller diameter, about a 3 feet long. The four 3 feet long vertical legs of the H were smaller again and contained a wire, similar to co-ax. I dissected one in the early sixties, hoping to recycle the tubes; it proved to be a waste of time because the corrosion from ten years exposure to the polluted atmosphere of the time had weakened the metal which by then was porous.

There have been other design changes over the years as the technology advanced, to the present day directional aerials; which will often work in the roof space.

There is also a fair amount of antenna History to be found on the internet.

I remember our first television set was when I was about 4 so that would be 1957. I'm sure we weren't the first to have one. The picture was initially a 'snowstorm' then when it was tuned in properly the only programme on was horse racing, in black and white naturally. Fascinating when you switched it off watching the picture contract into a dot in the middle of the screen before becoming too small to see.

The kind you probably don't want for an early scene is the yagi antenna, the one that has a rod pointing towards the transmitter with short, horizontal rods (quarter-wave dipoles?) crossing it. These, IIRC, were associated with higher-frequency broadcasts that started later; around the time that BBC2 started?
Top

The H aerials were directional - one leg of the H was a reflector so the thing must point the right way which is what all the shouting was about during installation. They could also be horizontal or vertical according to the polarisation of the transmitter. Being horizontal ours was in the loft, resting on convenient roof cross timbers.

I have a vague memory from the early 1960s, being told that the 'H' aerial was for BBC and the 'cross-bars' for commercial transmissions - does this strike a chord?

Cue wonderful memory from late 1970s, visiting girl friend off Mile End Road, her landlord telling his two young lads "well, as you've been good today, you can watch half an hour of commercial television". He was not joking.

Guy Rixon wrote:The kind you probably don't want for an early scene is the yagi antenna, the one that has a rod pointing towards the transmitter with short, horizontal rods (quarter-wave dipoles?) crossing it. These, IIRC, were associated with higher-frequency broadcasts that started later; around the time that BBC2 started?

BBC1 and ITV broadcast on 405 line VHF; BBC2 started in April 1964 and broadcast on 625 line UHF, meaning you needed a new aerial and a new TV capable of dealing with both systems in order to watch it. The initial takeup for BBC2 was limited, so UHF aerials were not very common at that point. BBC1 and ITV later migrated to 625, from November 1969, but the 405 line transmissions continued for some time after that, into January 1985.

TV rental advertisements from 1960 indicate that an ITA aerial was free with the TV, but a BBC aerial was available at low rentals [-/6d per week in 1962], confirming that two aerials were required.
Regards
Noel
Top

Noel wrote:TV rental advertisements from 1960 indicate that an ITA aerial was free with the TV, but a BBC aerial was available at low rentals [-/6d per week in 1962], confirming that two aerials were required. 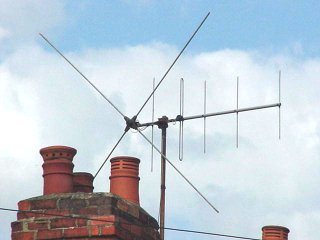 ITV VHF aerial was the smaller one (VHF Band 3, now used for DAB).

One other point, which may or may not track back to the 50s/60s but is certainly a more current practice..

In the UK main or regional transmitters trend to use horizontal polarisation, so the aerial works best pointing towards the transmitter with whatever bits (the side bars in Guy's example above) sitting horizontally - while relay or local fill in transmitters tend to be vertically polarised with the aerial then rotated through 90 degrees about its axis. This is to avoid interference between transmitters.

So depending on where the model is, the data (certainly freely available for nowadays) about the local TV transmission network governs the orientation of the aerial.

To answer the OP's question about the missing aerial, they are quite vulnerable to storms, and possibly had been blown off. Also are you sure that's a TV aerial, the resolution of the two pictures is so poor, I'm not sure.

Have you checked for the history of broadcasting aerials in the Cambridgeshire area?

My father liked playing with these things, provided your TV had the required tuner, you could pick up TV from outside your area. We used to get TWW channel 10 (our area) and Southern. I saw Thunderbirds about two weeks before my friends in school because they didn't have Southern!
Tim V
Scalefour News Editor
Top

Thanks everyone for the information. This really is a whole new rabbit hole to disappear down!
I think I'll have a go at making a simple H and see how it looks.