Not something I need for my layout, but a locomotive class I have always liked. I prefer making things, rather than just buying them, so I'm building a kit rather than converting RTR. This will be Wild Swan in original condition. Starting with the Streamlined Non-Corridor Tender. I'll be building this pretty much as designed, unless something seems really off. 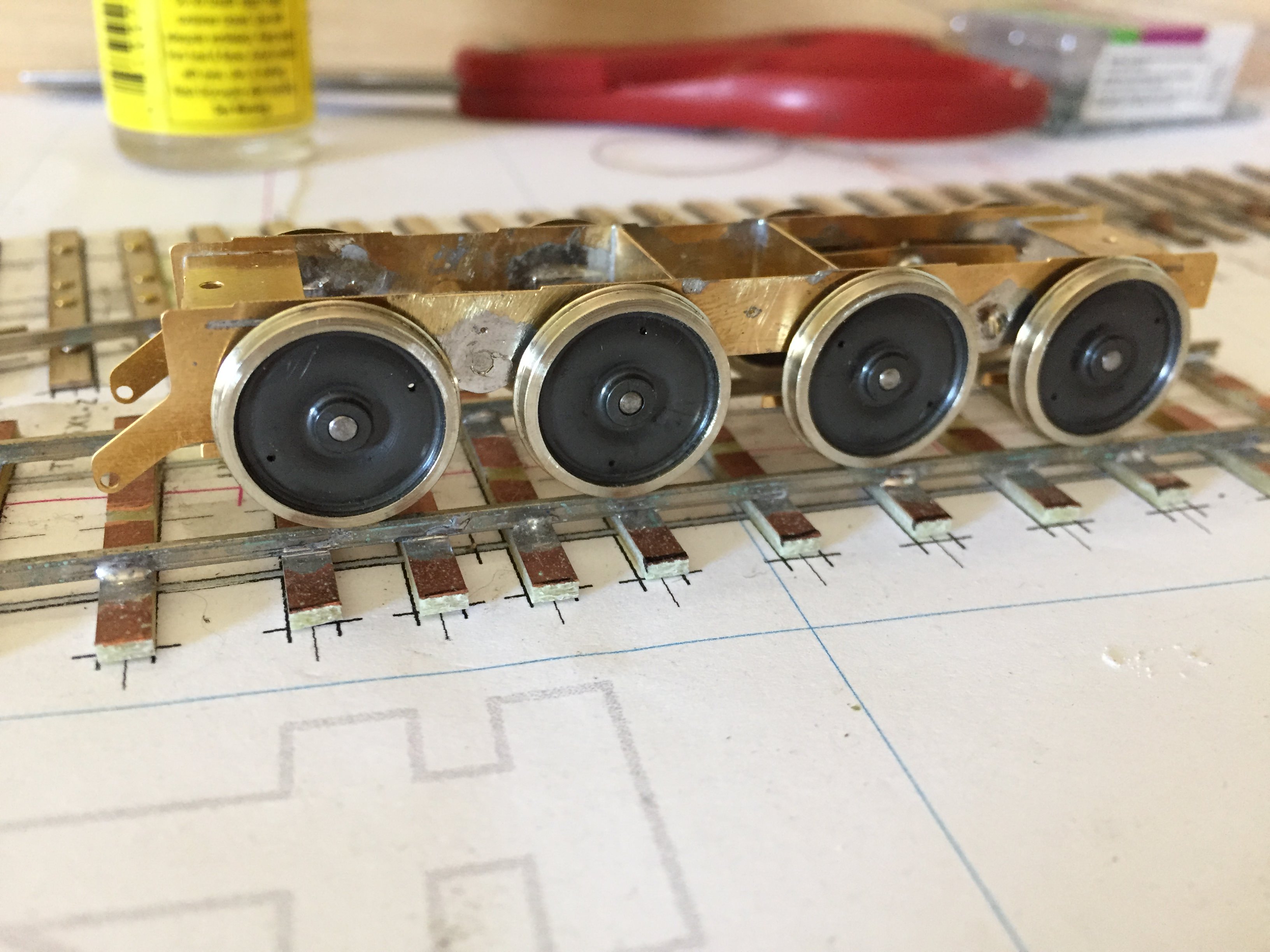 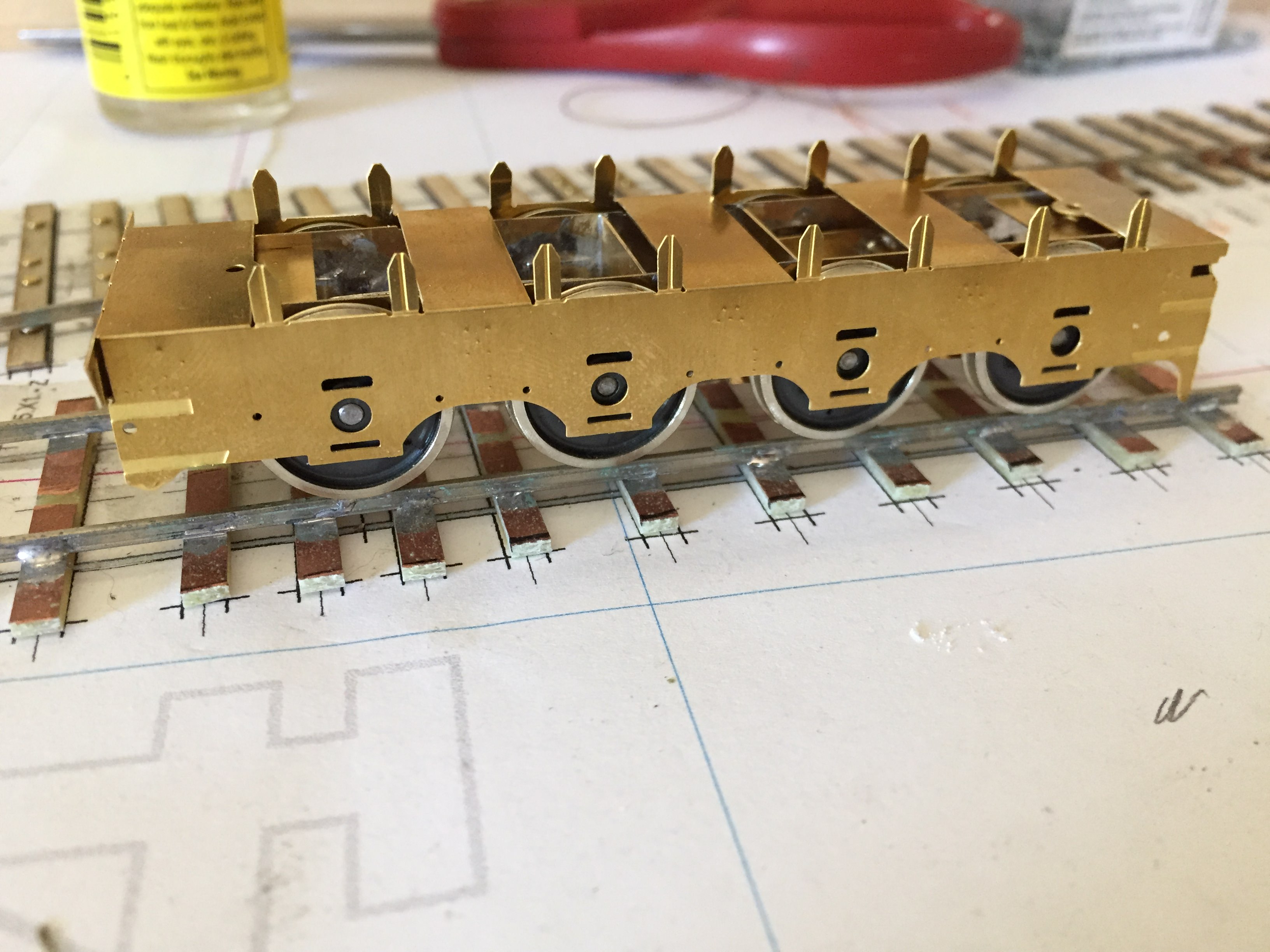 Thanks for posting, I look forward to updates.

I have no need (nor even desire really) for an A4, but could be tempted by an A3 at some point, so will be interested to see how it is designed to go together.
Top

Oooow this will be nice. I have a A4 kit in the to do draw. I will follow (proabably a couple of years later) along with your build

I want to build a couple of modified Gresley A1's one day so this may help.

Looking forward to it.

Awoof woof.
“He who dares not offend cannot be honest.” Thomas Paine

DougN wrote:Oooow this will be nice. I have a A4 kit in the to do draw. I will follow (proabably a couple of years later) ...

I've already started mine!
That would be an ecumenical matter.
Top

You may find it useful to download the latest Brassmasters instructions for the A4 and your chosen tender as they include pictures that identify the various castings.

This is true of all their LNER locomotives and tenders.

I've made a small amount of further progress with this and I have encountered the first problem, which I think I've solved. The problem is that the wheels aren't really designed to be removable. There is a strip at the bottom of the axle guide that is designed to be folded over to retain the axle. That works, but it can only really be done once, do it too many times and the half etched line will break. The other thing obstructing the removal of the wheels are the brakes. The idea is that the wheels are fitted and used as a guide to place the brake shoes. Then the pull rods are fitted, again with the wheels in place. However, there are pull rods on both the outside and the inside of the wheels.
What I am planning on doing is the following. For the axle retaining strips I will remove them now and glue them in place once everything is put together after painting. The brakes are a little more complicated, but I think I should be able to make them as a separate assembly. Solder them together, but don't attach them to the chassis. That way, with a little care, they can be fitted and removed as needed.

I have also decided that now is as good a time as any to paint the wheels. The tender is less critical in this regard, but I don't want to have to paint the driving wheels after I've sorted out the mechanism. I want to fit them once and once only, so they need to be painted before I need them. I spent a few days struggling to get straight pieces of mashing tape to follow the curve on the edge of the wheel. Today I went to the local hobby shop and bought some liquid masking film. I had all the wheels done is less time than I had spent on one with the tape. I laid them out on cardboard (courtesy of Amazon) and held them down with double sided tape. I gave them a coat of red primer and when that was dry a coat of Precision P53 Crimson Lake. I smuggled this back to the US of A on the way back from trip to Ally Pally in March. Don't tell BA! I hadn't actually sprayed enamels with this compressor before and since it's pretty small I figured it would need thinning. As we all know, expensive models are the best place to experiment with painting techniques. I've found that "airbrush ready" paints need to be thinned almost 1:1 paint to thinner to get good results. The PP paints are thicker than the other paints I've used (Tru-Color), so I went with 1:2 paint:thinner. This worked fine, but 1:1 would have been better. I also managed to miss half the spokes, so another coat will be needed, probably tomorrow.
Wet paint and direct sunlight make these look quite light, but now that they're drying they look more like the colour they should be. 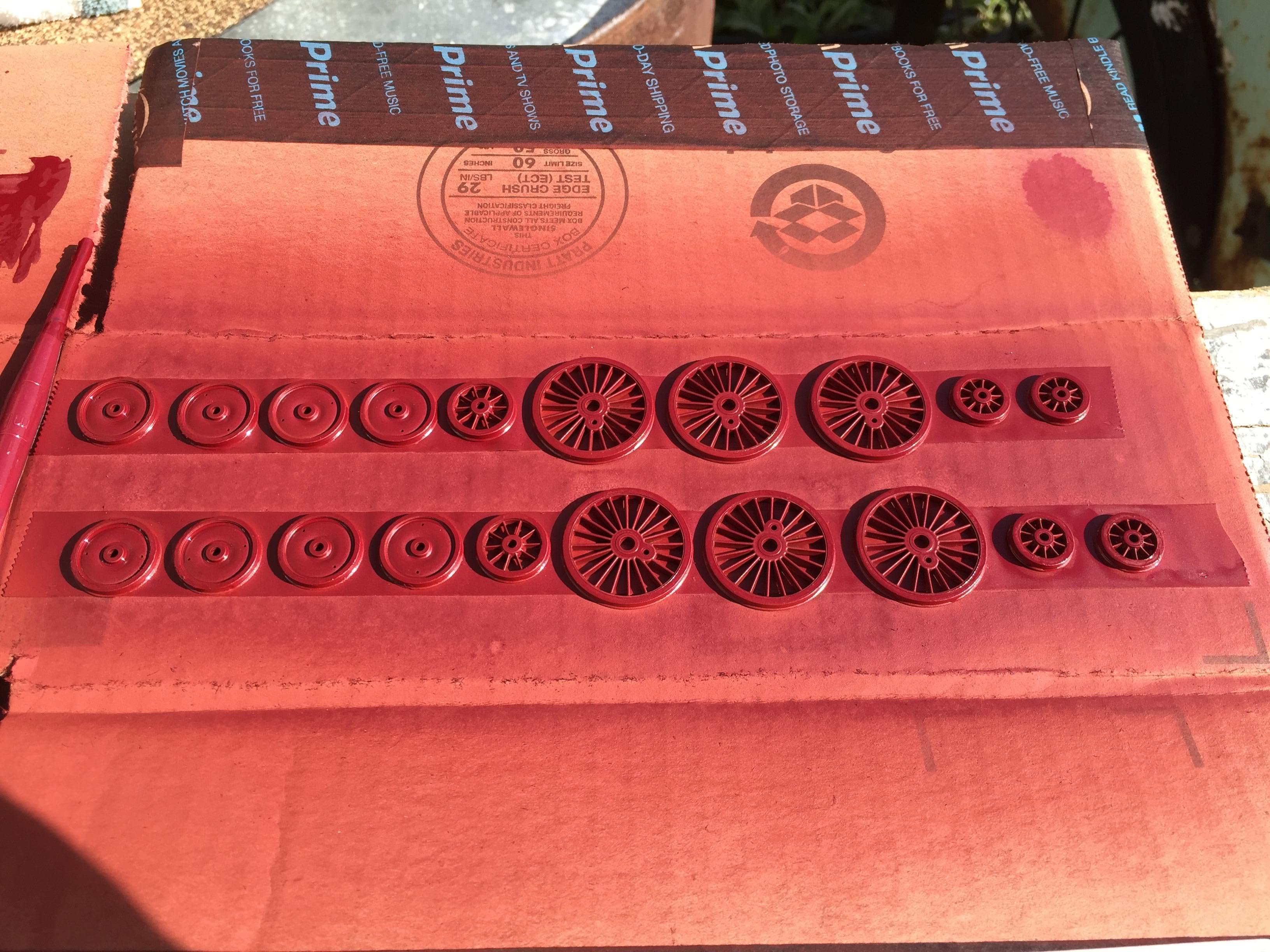 With a second coat of paint the wheels have now been reunited with their axles. I have also finished* the brake gear. Everything is soldered together firmly except the tops of the brake shoes and the brake cross shaft. This was I can still remove the brakes to allow the axles to be removed. I need to trim all the bits of wire as it's kinda a mess right now, that's a good project for tomorrow. 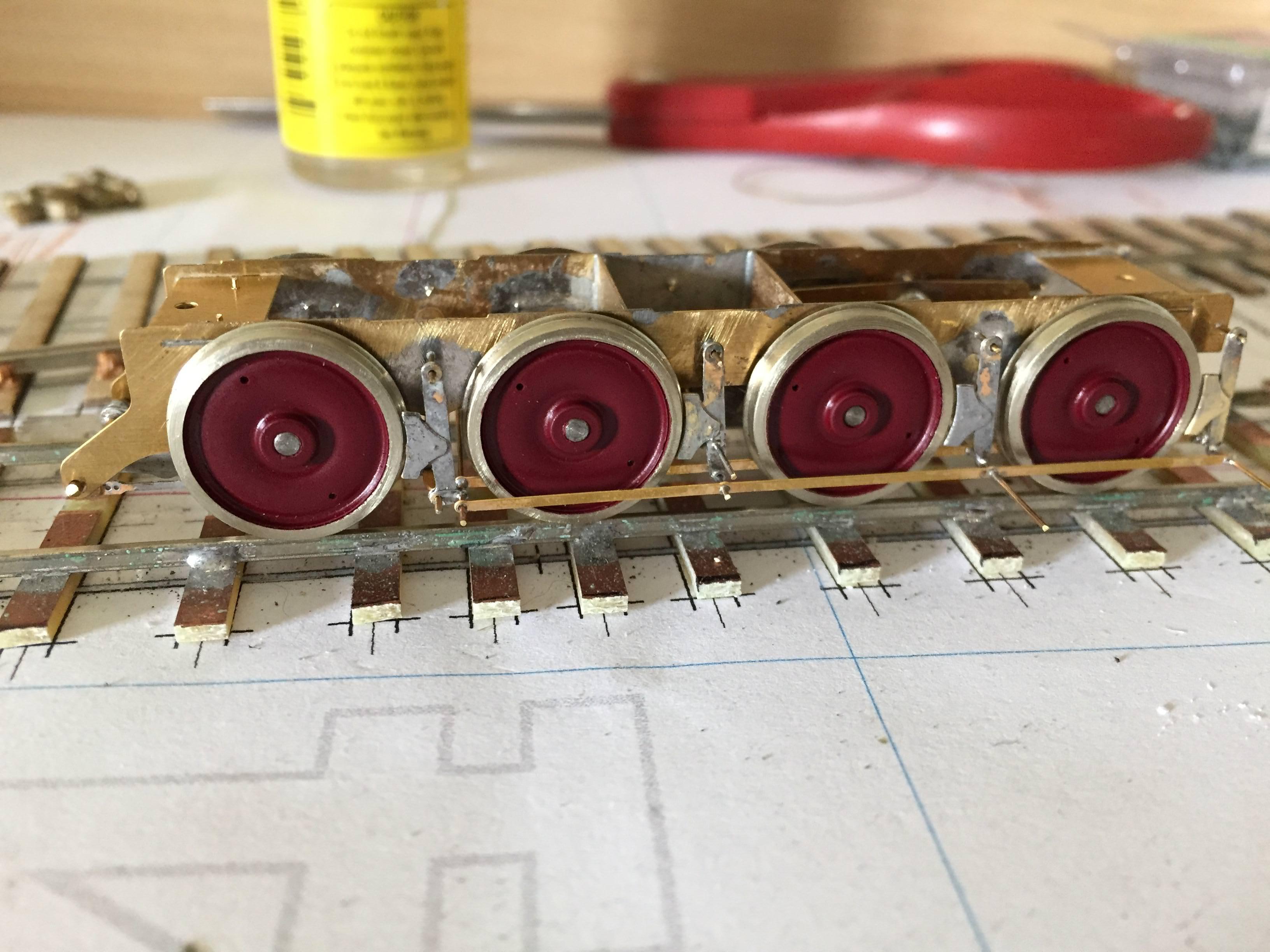 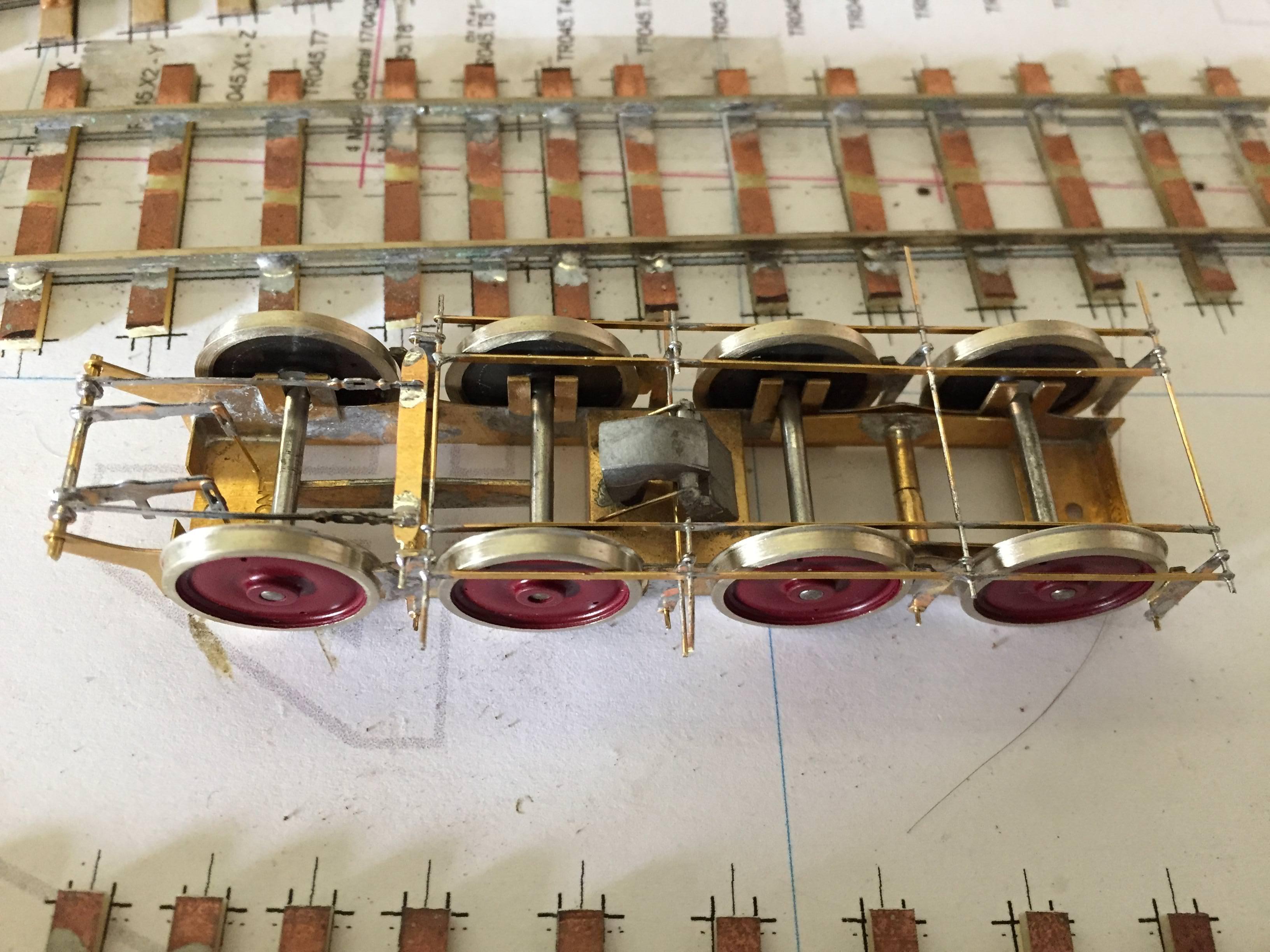 You have those brake shoes lovely and close, have you insulated them anywhere?
Regards
Regards
Keith
Grovenor Sidings
Top

grovenor-2685 wrote:You have those brake shoes lovely and close, have you insulated them anywhere?
Regards

I haven't yet. Insulating this chassis is going to be a "fun" project. The wheels scrape on the inside of the outer frames at the moment as well. I was thinking of kapton tape for that, not sure how well it would hold up though. It may be easiest to move the brake shoes back a bit, I'll investigate in the morning.
Top

When I built a Finney M7 years ago I thought that the frames were very close to the wheels, so this may also be a feature of the mainframes, although on the inside. Too late it dawned on me that it would have been a good idea to use the EM frame spacers. If you haven't started your mainframes yet...

Philip Hall wrote:When I built a Finney M7 years ago I thought that the frames were very close to the wheels, so this may also be a feature of the mainframes, although on the inside. Too late it dawned on me that it would have been a good idea to use the EM frame spacers. If you haven't started your mainframes yet...

That's a good tip, thanks! I haven't started the locomotive yet, I wanted to do the tender first. I'll bear that advice in mind when I get to it though. Good to know about the M7 as well, there is one in the post at the moment...
Top

The M7 was quite straightforward apart from a little extra clearance for the rear driving wheel crankpins in the footplate. I would definitely go for the EM spacers on that. On the odd occasions I visit the Southwark Bridge project they have a number of them in use as station pilots and the like, often shifting quite lengthy trains. I'm afraid, though. that my route to a M7 these days is Hornby with Ultrascale wheels. I suspect the brass one and its compensated chassis will pull a lot more!

Well it's been a while since I've done any work on this, but suddenly I had the urge to get back to it. I have finished the tender under frame and started on the locomotive chassis. Everything has been going pretty well, I'm quite impressed with how well the kit is designed. I've decided to use the EM spacers for the main engine chassis to get a bit more side play for the drivers. I've got everything ready, so the wheels should go on the axles in the morning. 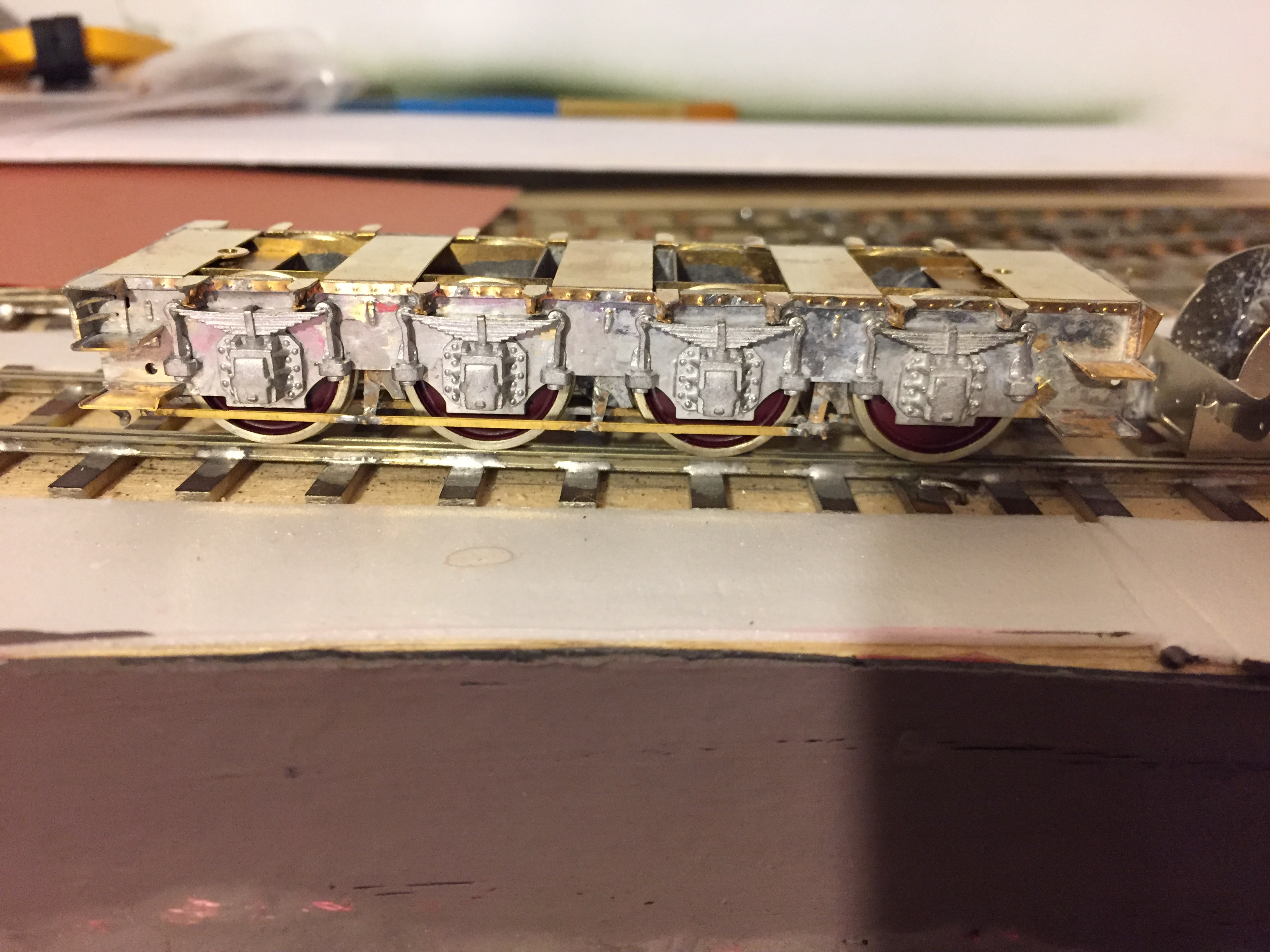 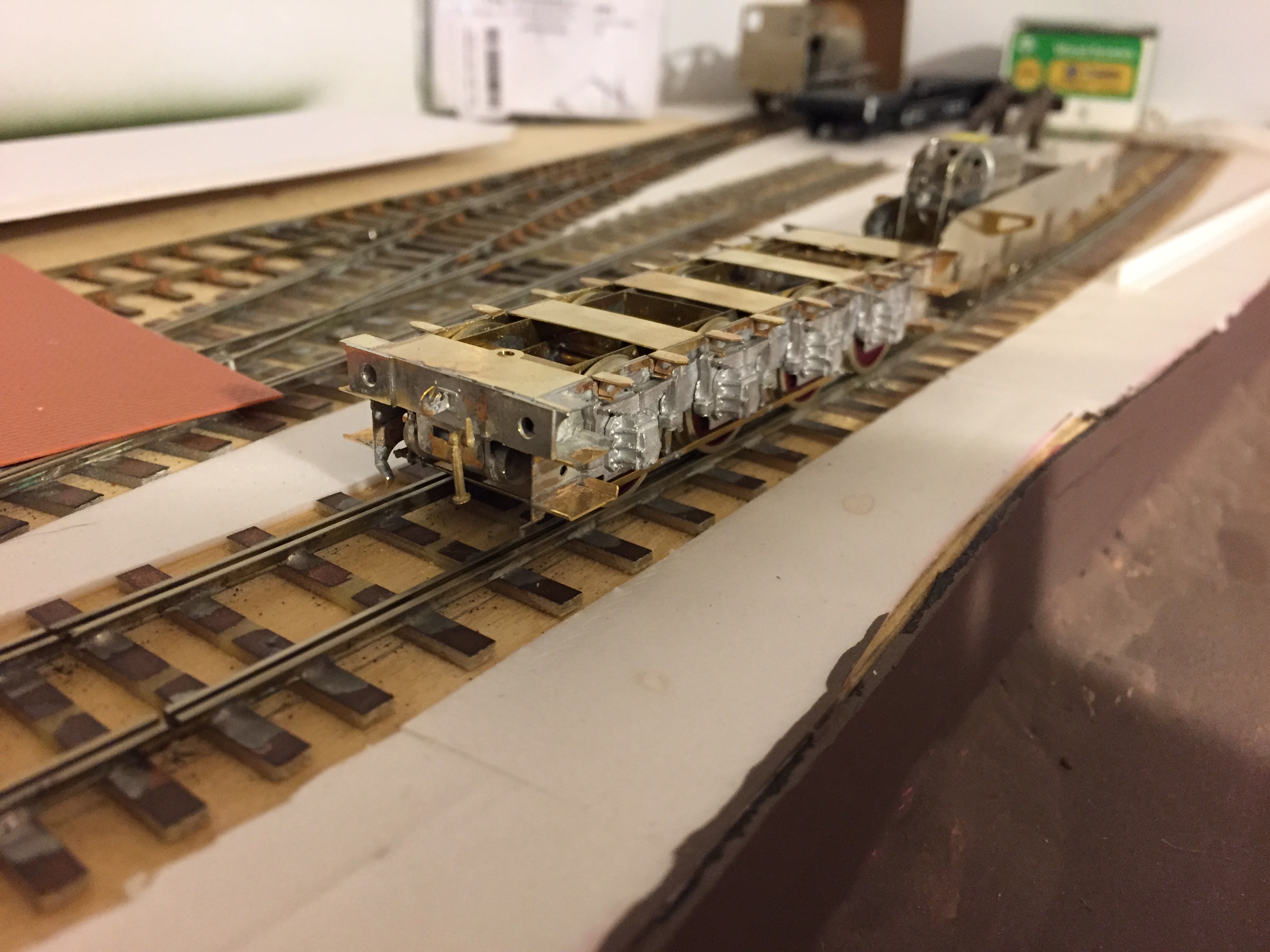 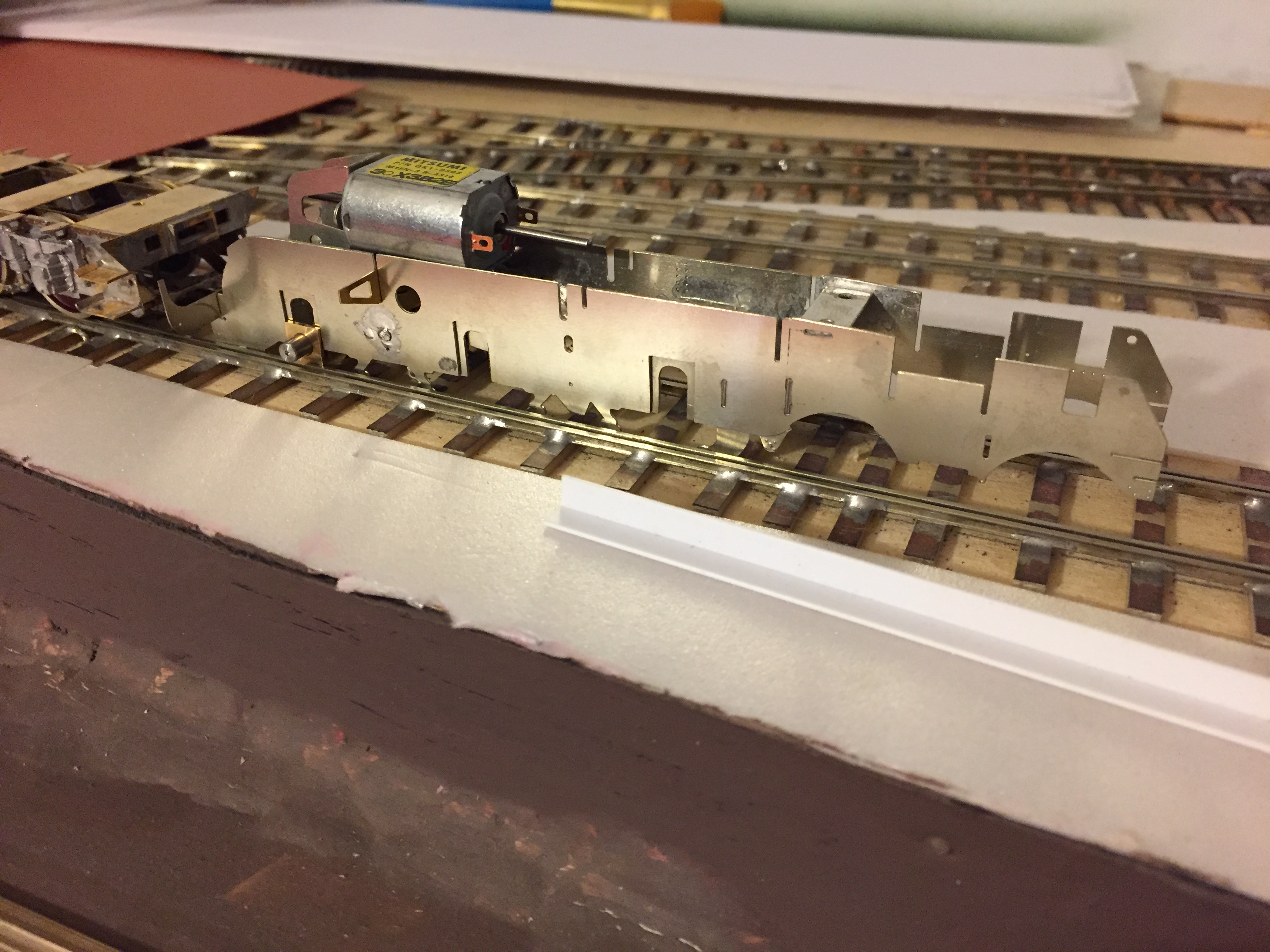 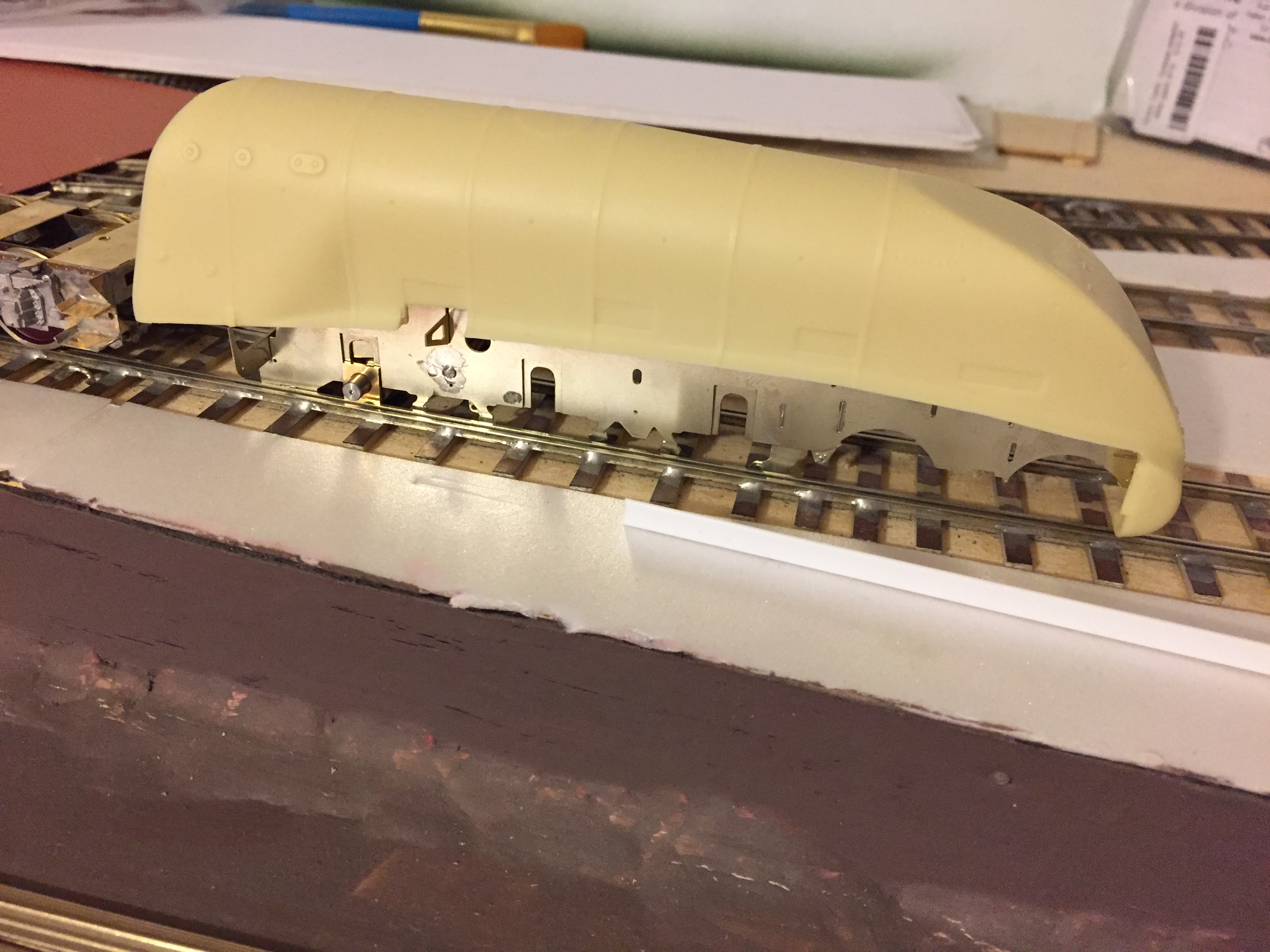 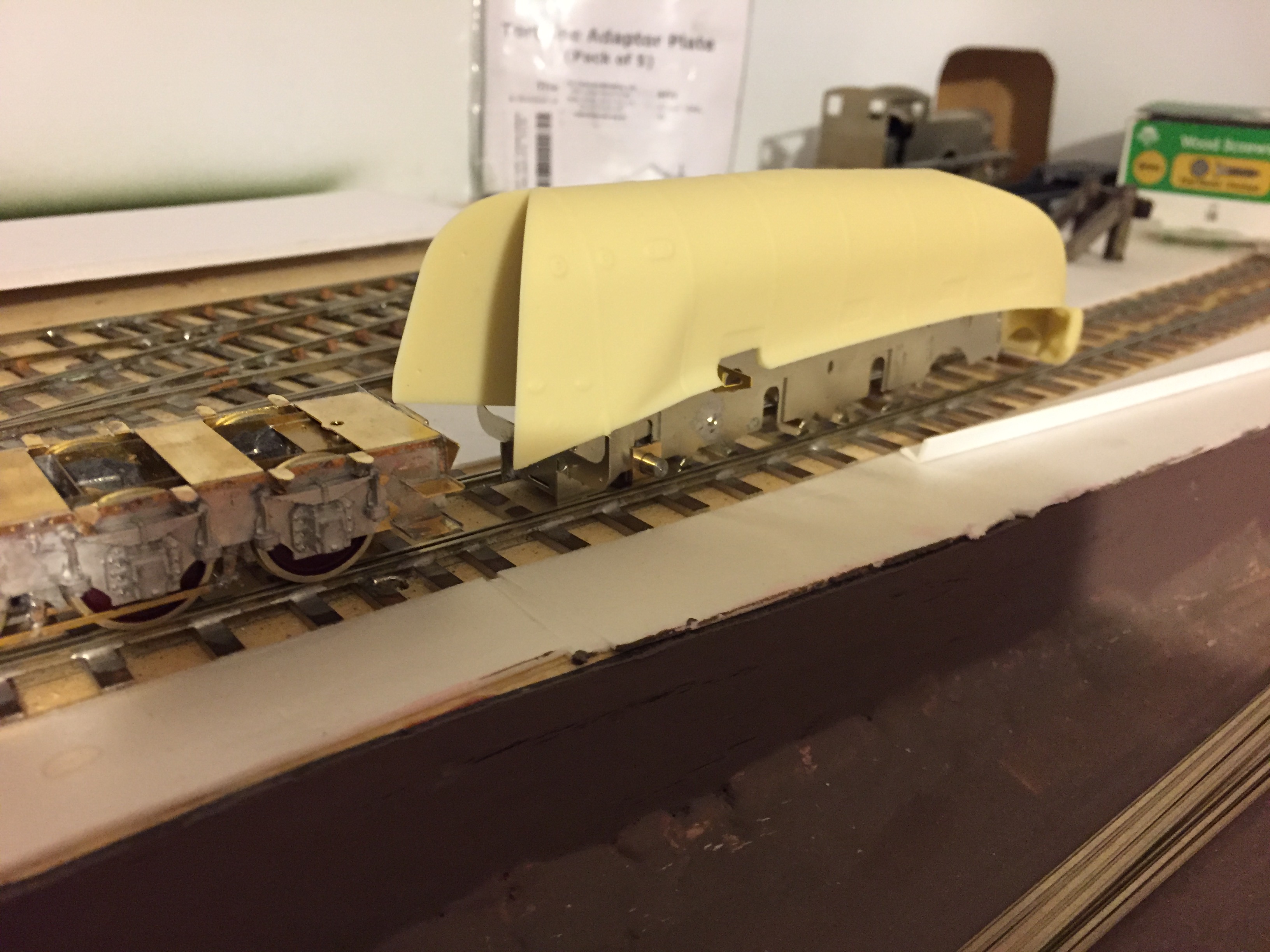 Looking great there Gareth. I am struggling to keep away from Brass at the moment. I have some track to finish.. though the thought of a A4 tender sounds very nice as I have one almost ready to go into the erecting shops... (IE with all rivets punched out)

I've added the wheels and things are still going well. The 6 coupled chassis manages to get through the one really tight point on my layout, which was the goal. I still need to fit the crankpin bushes, but things are looking good. 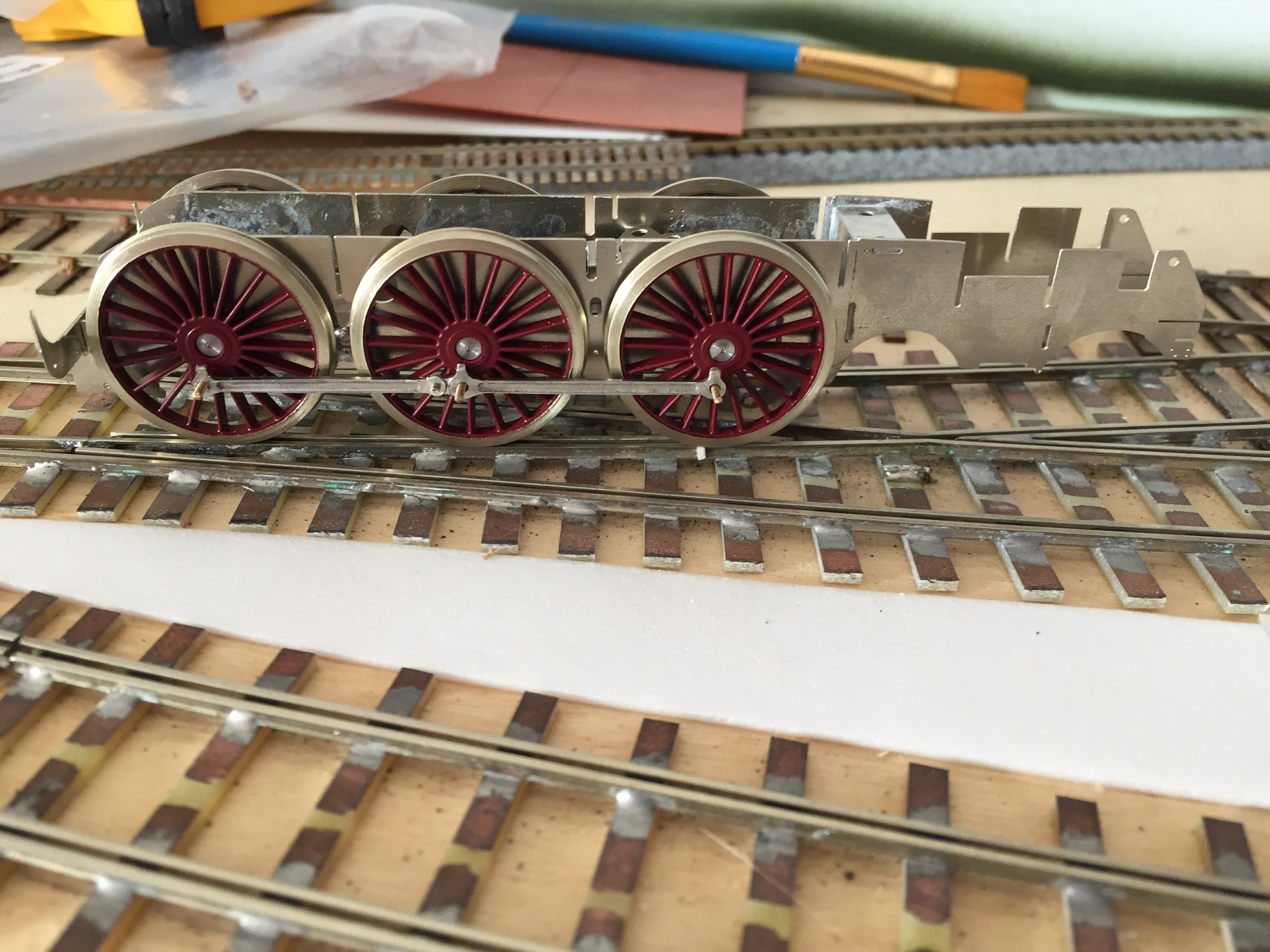 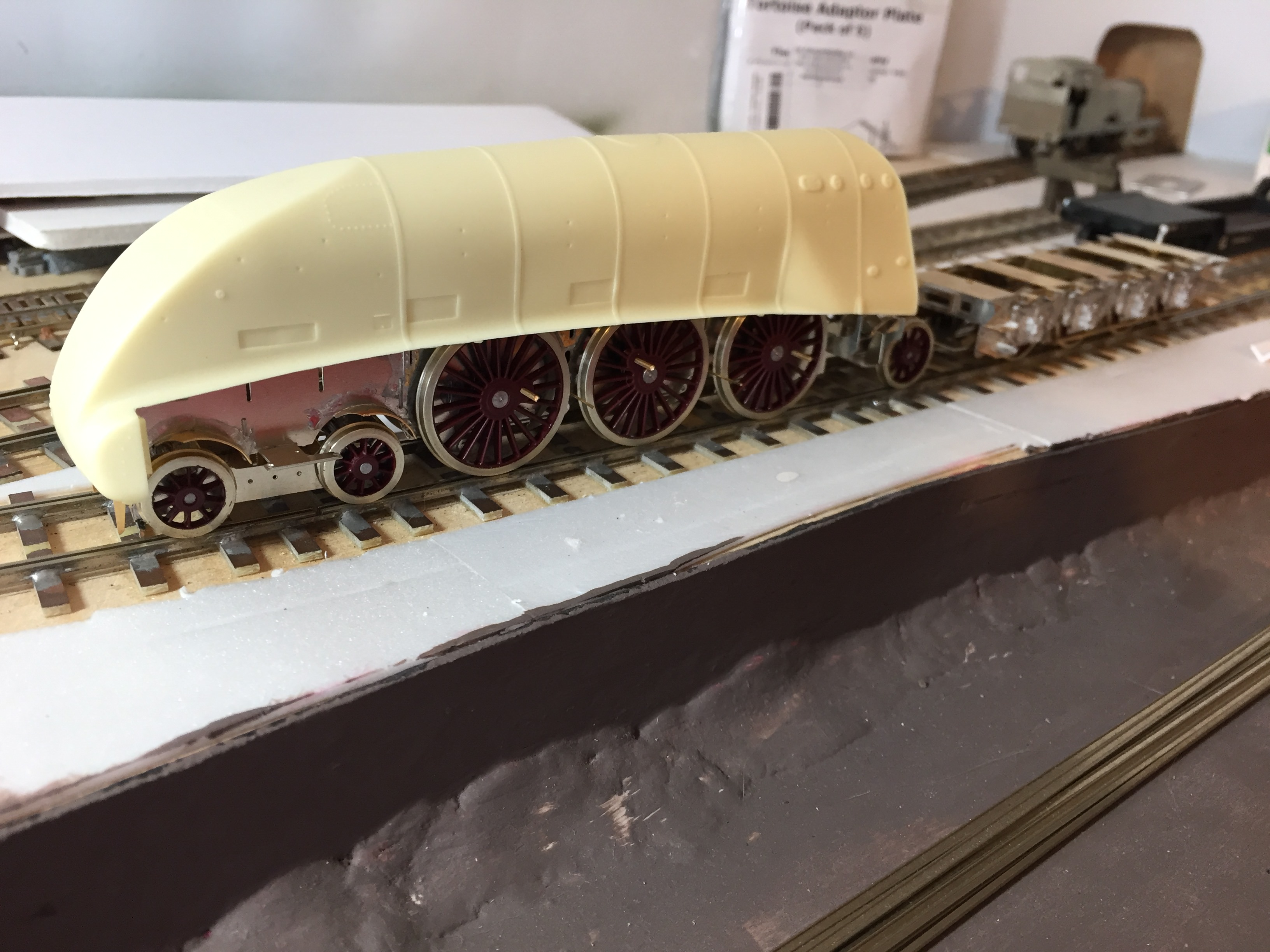