It can take me a full day to weather wagons as I try to replicate the way they weather in real life.
Add muck, wash it off, add muck, wash it off - repeat for ages varying shades and colours. Then dry brush, then little powder, then repeat everything several times. Works though.
“He who dares not offend cannot be honest.” Thomas Paine

I've been working on another Mousa kit, this time a GNR 4 plank open. It arrived unexpectedly a few weeks ago and I started work almost immediately. Everything went together without a hitch. I now have it painted and have started the lettering. I didn't see any GNR wagon transfers available and there certainly aren't any Pressfix ones, so I'm hand painting this one. It will need some touching up, but I'm pleased with it so far. 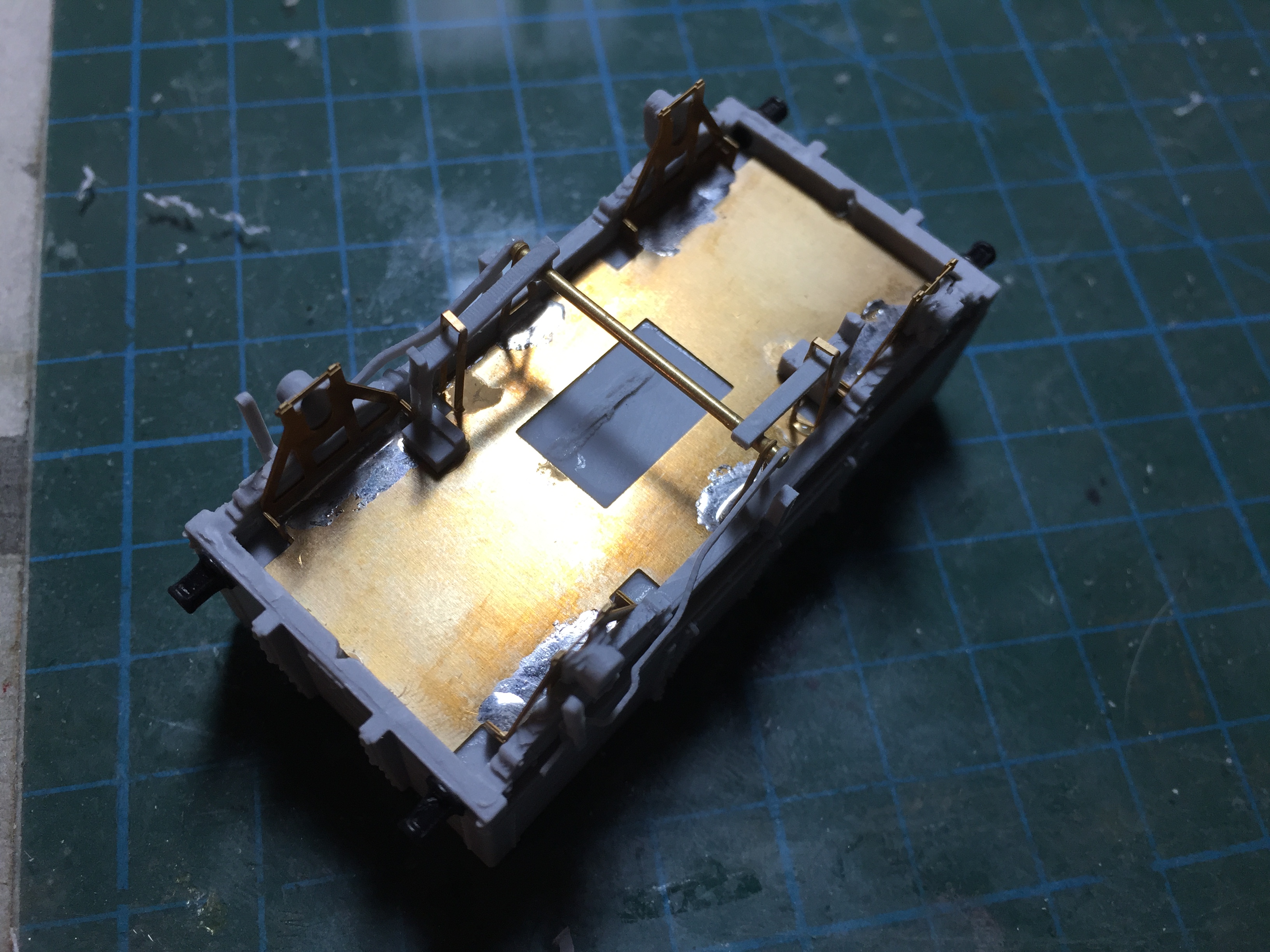 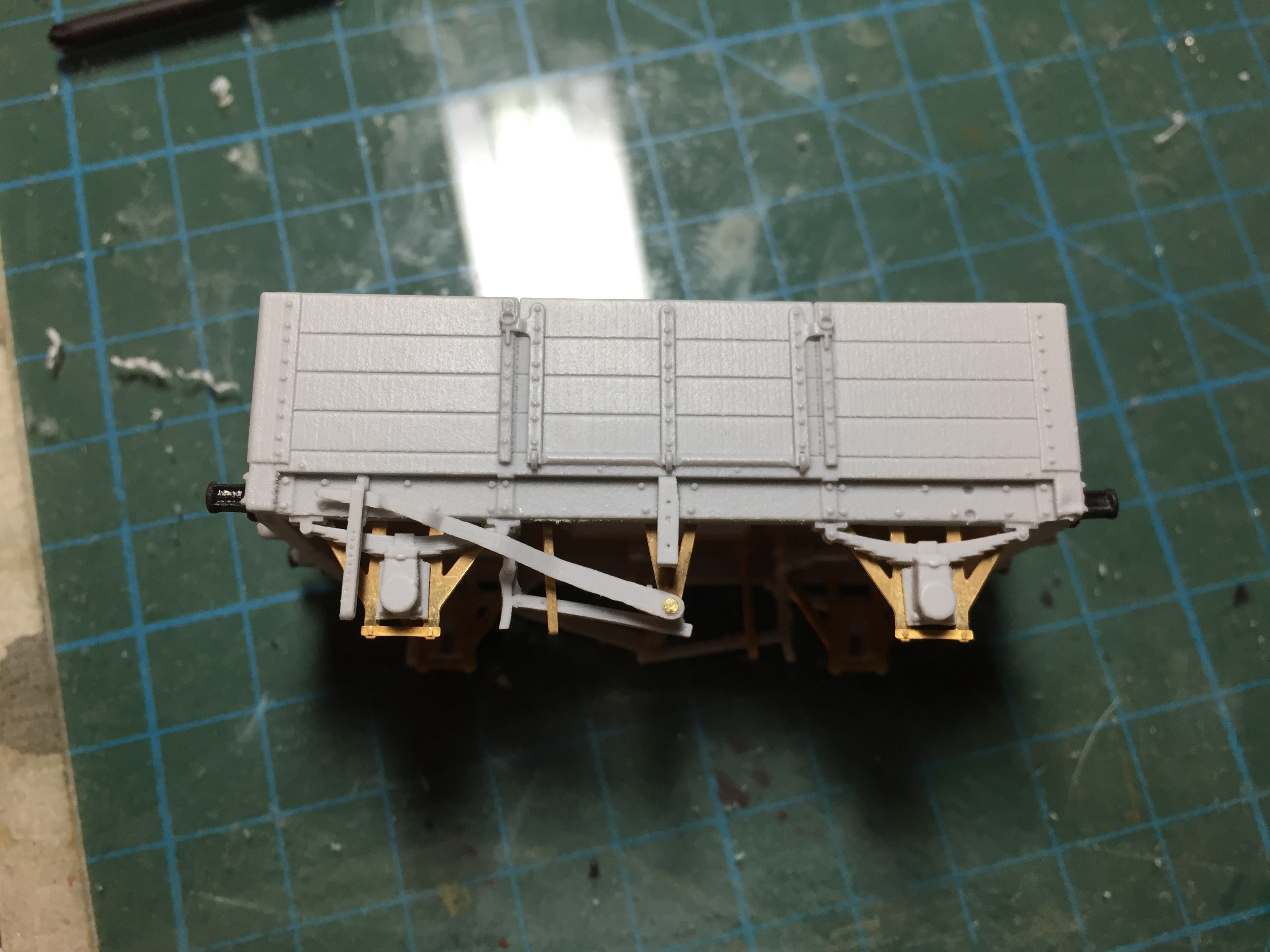 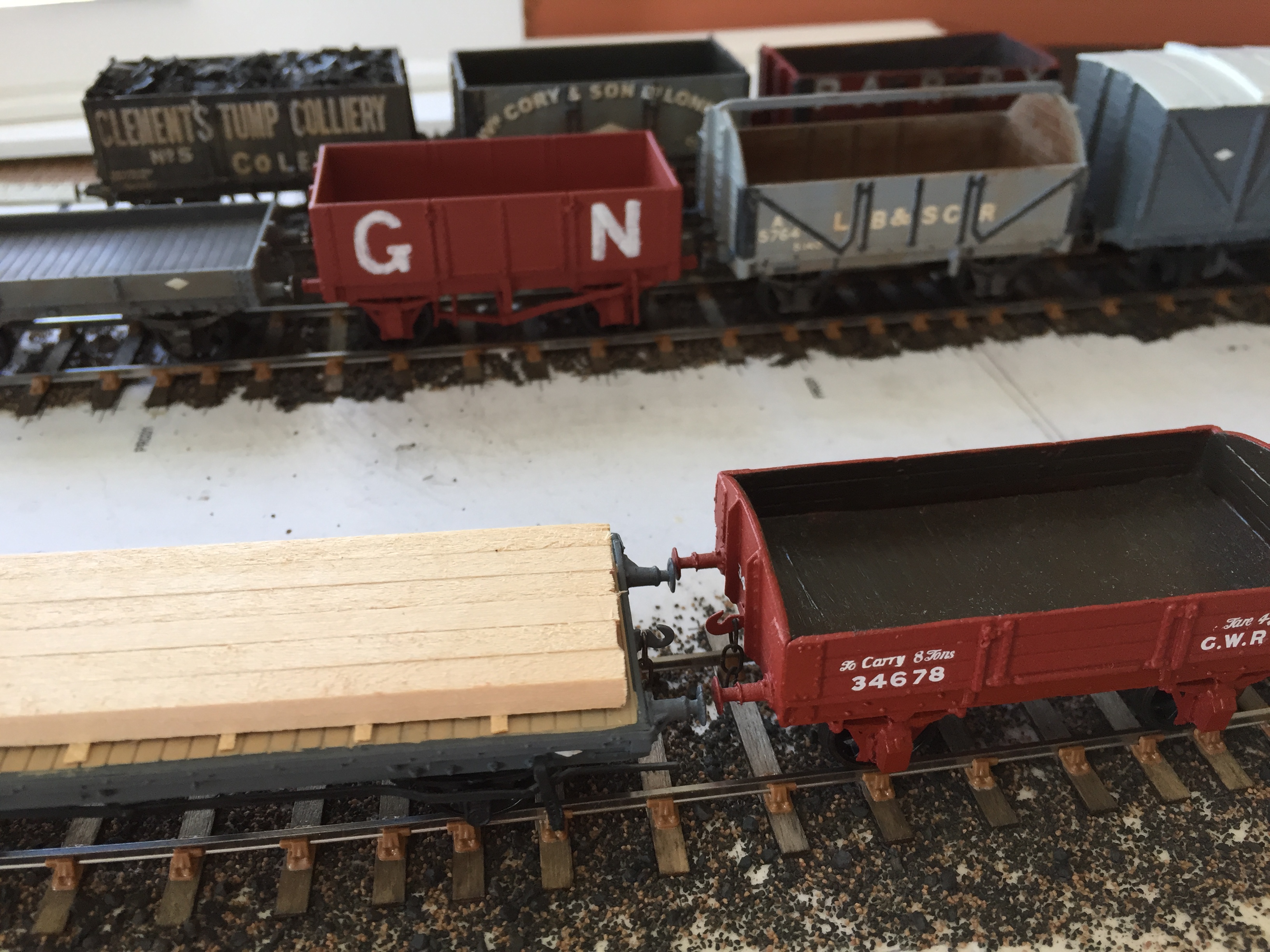 Don't POWsides do GN transfers? I'm sure I found some a while ago - although if it proves they're only available in 7mm, apologies for yet another red herring (I tend to only do LNER & constituents for my O gauge stuff).
David L-T
Top

I'm not familiar with wagons of this vintage, but the geometry of the brake on the side with the left hand lever means that this side of the brake gear will not work, I'm afraid [the other one is OK].
Regards
Noel
Top

Aren't there some of the waterslide transfers that can be printed on? Perhaps you could make up your own transfers?
Tim Lee
Top

dal-t wrote:Don't POWsides do GN transfers? I'm sure I found some a while ago - although if it proves they're only available in 7mm, apologies for yet another red herring (I tend to only do LNER & constituents for my O gauge stuff).

They do a pack specifically for GN vans, although I expect that the large letters are OK for opens too, and the numbers could perhaps be chopped up and rearranged. The transfers are the dry-print kind.
Top

It has long been a source of frustration that the Methfix/Pressfix range of transfers never covered pre-grouping wagons of the LNER group (other than some Scottish companies).

There is an unmet need for a transfer sheet covering GE, GN, GC and H&BR, etc. etc.
Top

Thanks to Bill for drawing attention to these GN transfers.

Water slide transfers are variously available for several of the pre-grouping companies that later formed the LNER group, but you have to hunt for them from different suppliers.

It is just a pity that Methfix/Pressfix transfers were never made available for the LNER constituents, as they were for some of the pre-grouping constituents of the LMS and SR.
Top

Well it’s been a while hasn’t it. Recently I've been working on a few more Edwardian wagons. I received a couple of decorated PO wagons from POWsides, they're both RCH 1907 designs, which are slightly too modern for my 1903 layout, but they'll be ok. The one I've built so far is lettered for F. Warren. The only pictures I've found of their wagons bear the same number as the kit, but the kit has two more planks. The caption lists similar dimensions to those of the kit, so I'm going to let it go. The prototype had a lifting plank over the door and I'll need to add this. I found the Slaters brake gear somewhat lacking so it's been replaced with Bill Bedford etched brakes, everything else is as the kit was intended. 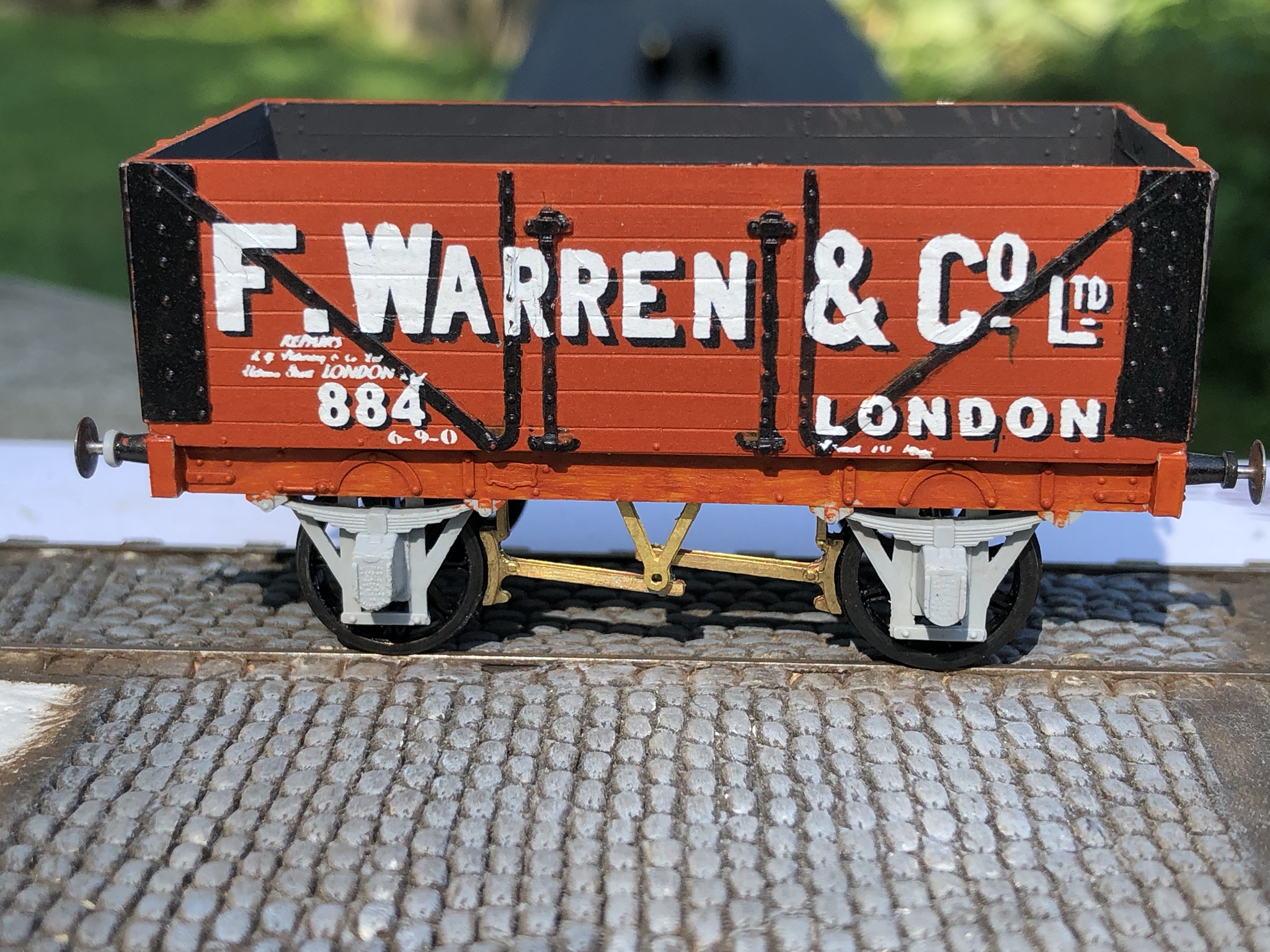 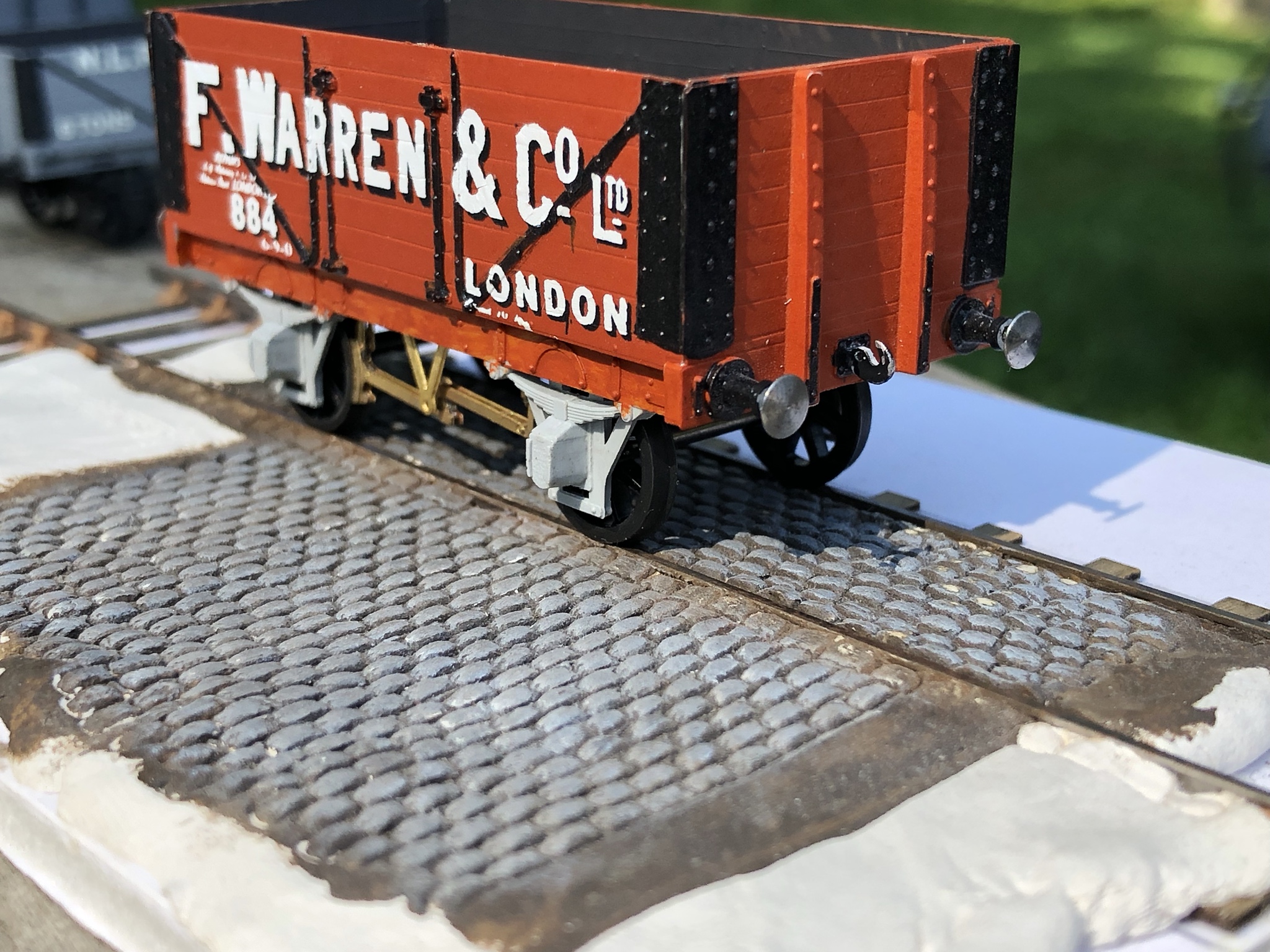 I've also been working on another Bill Bedford LNWR D32 van. These kits go together amazingly quickly, I think it was ready for paint in about an hour. I've decided to paint this one in the somewhat rare two tone livery. As with most grey wagons I started with a coat of mid grey primer. The outside frames were then picked out in Precision's GWR grey, which seems to have a greenish tinge that I'm not too fond of, it may get repainted in something else. The exact details of how this livery was applied are a bit fuzzy. I haven't found any pictures that show the bottom of the ends of any vans in this livery, except for a brake van, and who knows if they were painted differently. The solebars are another area of uncertainty, I've gone with dark grey there as well. The axleguards and axleboxes need to be painted black, plus diamond and number transfers. 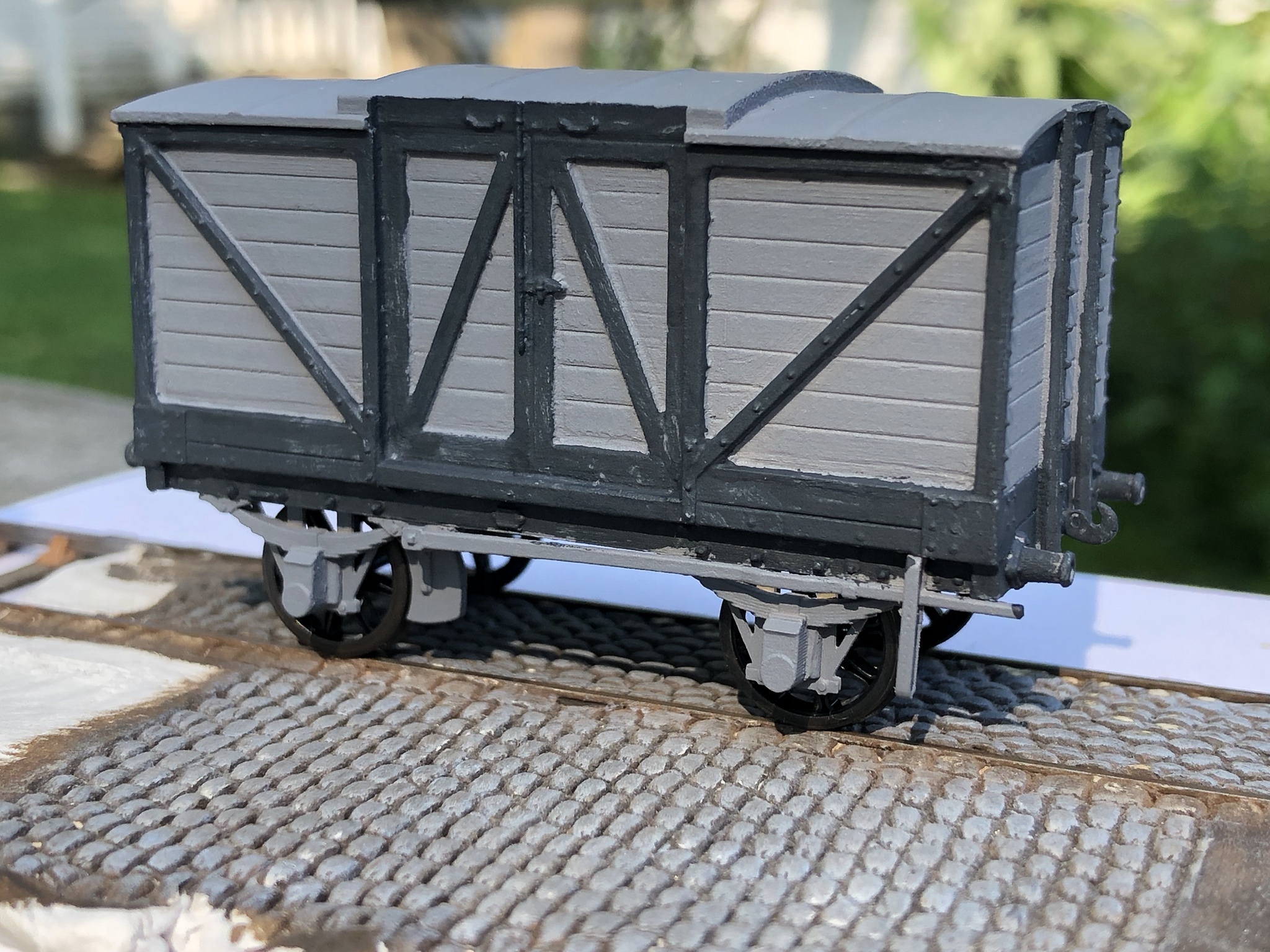 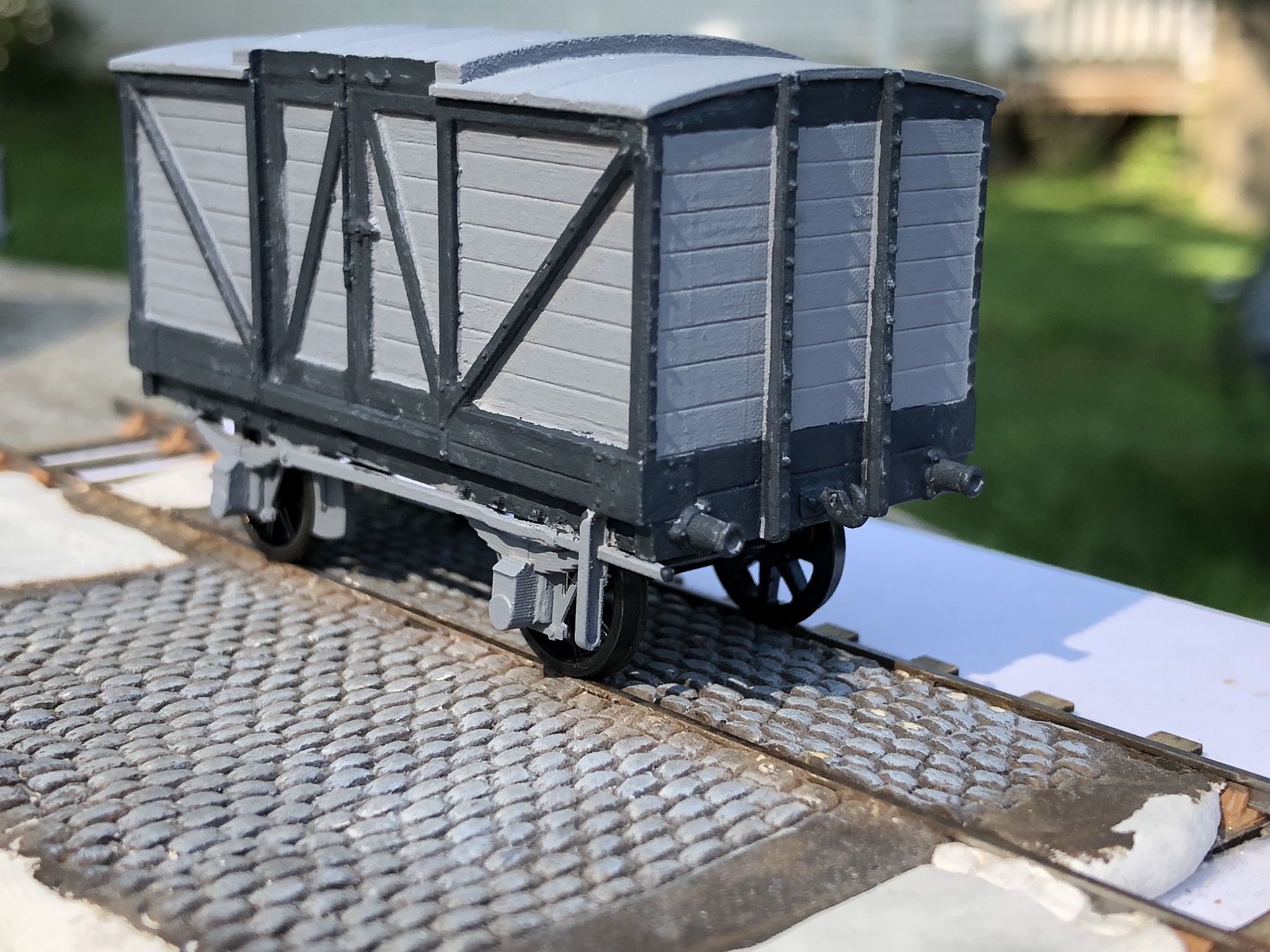 The third wagon I've been working on is a North London 4 plank open. I'm a little unsure of the authenticity of this wagon, NLR wagons are particularly difficult to find photos of. Part of the problem is that after the LNWR took over the NLR in 1909 a number of LWNR style wagons appeared in NLR livery. The wagons that I know were built by the NLR have rounded ends on the buffer beams, whereas the LNWR standard is to have a notch on the bottom corners. So here's the problem. This wagons was built from a drawing I acquired from HMRS. It seems to be a model drawing, rather than a original company drawing, as 7mm:1ft is given as the scale. There is a date of 1888, but the wagon is shown with notched corners and LNWR style pushrod brakes. I built this, as depicted, from a Ratio LNWR 4 plank wagon kit, although I replaced the axleguards with some of Bill Bedford's etched ones, London Road axleboxes, and MJT? springs. It has been lettered with HMRS transfers. If anyone has any information on NLR wagons I'd love to have it. 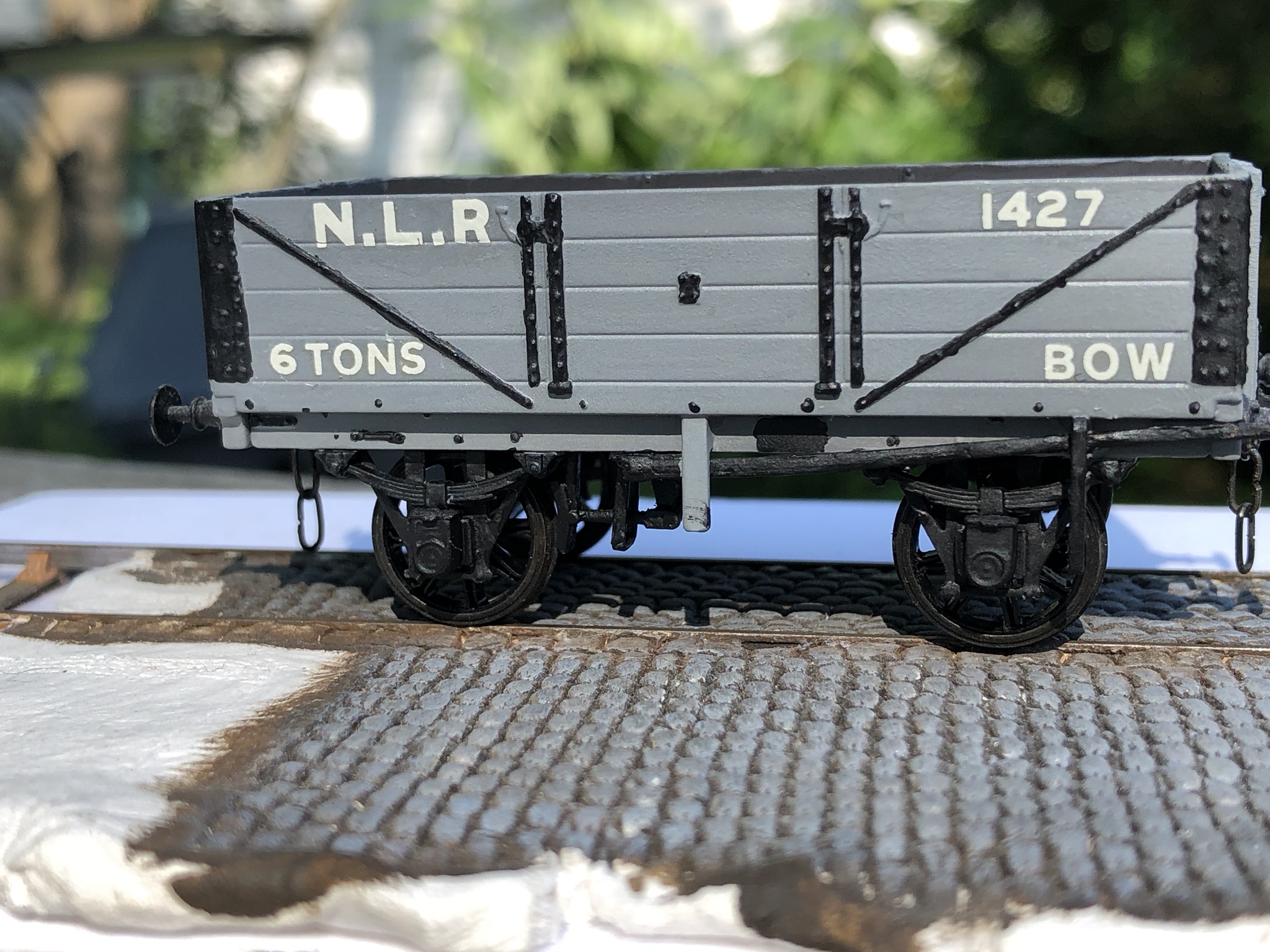 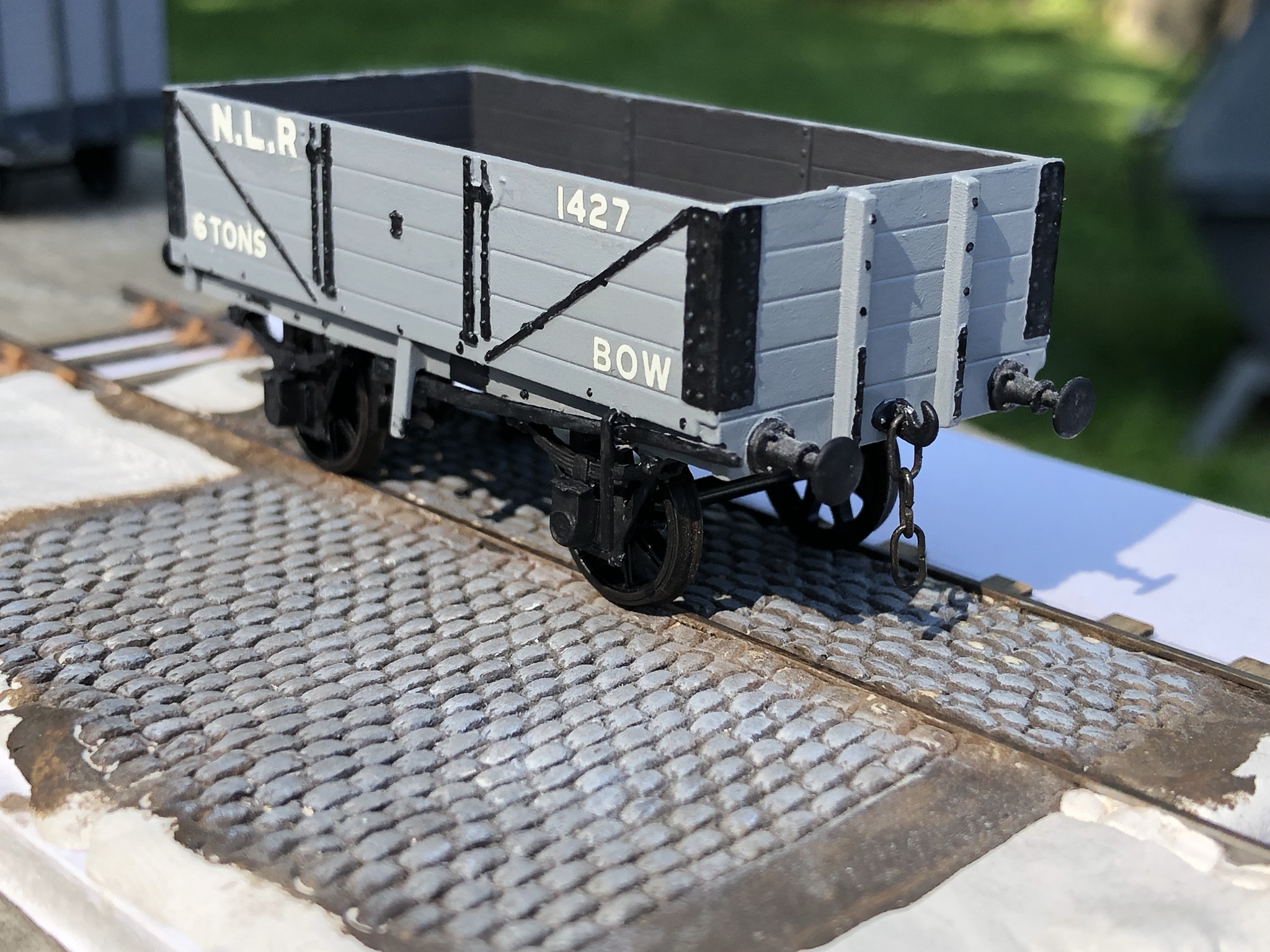 Good to see some of this pre grouping work much better than this 1930s modern image stuff.....

Nice to see something different

Very nice wagons Gareth; I've done some GNR, as I explore backwards from the LNER, and LNWR is also on my radar, so it's very interesting to see and read about these, as there aren't that many people modelling in this area...
Chas
Top
Post Reply
37 posts