A Hornby Class 31 has found it's way on to the workbench. I bought one some time back on eBay that had already been converted to P4 and, despite me asking specifically and being told it was fine, when it arrived it was clear that it was suffering from chassis rot and the only thing holding to together was the fact that the body had been glued to the chassis!! Not to worry, I got it cheap (now I know why) and the P4 wheels are actually worth more than I paid for the whole lot so all is not lost...

Having picked this up for a good price:

which, in conjunction with these bits:

First up, strip whatever is useful from the existing, rotten chassis:

So that'll be just the wheels, with the rest dumped in the spares box:

Next was was to wash the hands as the bogies had a tanker full of oil inside them...

Now to the blue body, three of the grills have been glued back in and the inside of the body shows the scars of having been glued to the chassis:

The body has also been damaged slightly at both ends but nothing a couple of strips of styrene and some sanding can't sort...

a couple of bits of styrene strip, superglue and some sanding has sorted out the cab damage although I've no doubt a bit more sanding will be needed once I get some primer on.

One job I will need to do is add the bodyside 'stripe' that was removed when the locos were refurbished so it will be out with the styrene strip and hope I can keep it dead straight along the full length of the body and round on to the noses...

I'm slowly doing 215 in post crash but pre refurb condition for Rountrees Sidings. Mine is using a Lima body on a Hornby chassis. Both buffer beams have snapped off but the rest of the chassis seems fine. If it becomes an issue I'll rebuild the Hornby gun bins into the left over Lima chassis.

Interesting that you will be adding the bodyside strip to the 31270 body as I've scraped most of it off the Lima shell. I think even 5 thou might be a bit thick and can be better represented by scribing two parallel lines instead.

I've got a photo of 215 at Consett in the snow with snow ploughs coupled at both ends so the plan is to do both the ploughs as well.

Having stripped the body down, work has started on reinstating the body side band which was removed when the locos were refurbished. I've simply used styrene strip which may be a little too thick but it seemed the best way to get it dead straight...

Have you realised 215 was one of the tripcock fitted 31s. Not sure if it was still fitted in 81 but by 84 it was removed so I'll need to put the quarter circle shaped recesses in the second mans side buffer beam cowls.
Modelling Clackmannanshire Railways in 1975
http://waveydaveysmodelmuddle.wordpress.com/
Top

I know, I had thought of using a strip of Tamiya masking tape instead but I was concerned about keeping it straight - I'll see what it's like after a coat of primer and may well thin it down. If I'm still not happy I can always get another body

waveydavey wrote:Have you realised 215 was one of the tripcock fitted 31s. Not sure if it was still fitted in 81 but by 84 it was removed so I'll need to put the quarter circle shaped recesses in the second mans side buffer beam cowls.

No, I wasn't aware and a Google hasn't been forthcoming coming with any photos...

Is this July 1986 picture any help gents?

Thanks Simon but not for me I'm afraid as I'm modelling the loco in 1982 before the collision.

I converted, renumbered and had weathered a 08 some time ago but it was never a good runner and did post a video of it here showing it limping. Well, having been off to see Rick, the 08 returned with new pickups, Brassmasters coupling rods and a sprung centre axle and now runs flawlessly. The nut for the centre crankpin pinged off in to the carpet some time ago so needs replacing.

I figured I should, then, finish it off so, tonight, the coupling rods have been removed and painted, put back, along with the brake gear and I've started more weathering and this is what it looks like tonight:

John, have you got any more details on this?

I'm just about to attack a Hornby 08, you see!
James Wells

Coupling rods were changed in case the existing Hornby ones were part of the problem but, again I don't think they were. The Brassmaster's versions are a little finer albeit the lack the 'square' on the rear half of the coupling rod.

My Bachman 08s have the centre drivers sprung as standard. They run very sweetly over some quite indifferent track work.

James,
Springing the centre axle is relatively simple as Hornby has done most of the work for us. I suspect their designers wanted to follow Bachmanns lead but decided not to include the springing on the production runs. The springs are even shown on Hornby's maintenance sheets. (Attached)
Adding the springs was so quick and simple that I'd forgotten I'd done one of mine, even when talking to Rick about the repairs carried out on Johns 08. Hornby has altered the bearing design over the years of production and I've used a couple of different springing methods to take into account Hornby changes.

Hornby have provided 1.7 mm blind holes in the chassis block above each centre horn guide. Later 08s use a circular flanged brass bearing, the wider flange slotting into the cast in hornslides of the chassis block. I wound a couple of springs from phosphor bronze then cut two slots into the wide flange of the bearing with a fine blade in a piercing saw to locate the spring. I also filed a flat to about half of the depth of the wide flange to give a corresponding increase in upward movement of the bearing. The spring sitting in the slots in the bearing prevents the bearing from spinning in its guide.

Earlier Hornby 08's had a square bearing that appeared to be made from sintered bronze. Here a long spring could simply push down on the bearing but I did things a bit differently. The centre hornguide was deeper than the two outers by a few thou but I increased the depth a little further by scraping away the upper mazak face with a Number 17 blade. The springs I used came from the original Hornby 08 buffers. To my eyes I find the original Hornby buffer head gives the appearance of a Dowty buffer as opposed to a BR self contained so replace them with a LMS LB01 buffer housing sprung with an MJT 2.5 mm shank head. This frees up the springs for use in the centre axle & also liberates some rather nice miniature E clips which I have other uses for.
The Honrby 08 buffer springs are a perfect fit diameter wise to fit in the "spring location holes" but far too short to push on the bearing so I made an extension plunger by soldering a length of 0.9 mm brass wire into some 1.6 mm dia. small bore tube. The photographs should clarify things.
I'm not sure whether Rick used a commercial spring or wound his own on Johns Loco. I forgot to ask him yesterday. I'll be speaking with him over the weekend and enquire.

John.
It's a simple thing to add the speedo drive bracket to etched coupling rods. I knocked one up from a a strip of foil cut from an old metal toothpaste tube that had been opened out and flattened. I glued the Bracket to the rod. Just got to get the speedo crank working now.

I've made a start on one of my SLW Class 24s. Fortunately, they produce a model of D5107, one of the Tyne Dock locos so no need for a repaint or renumber on this one albeit, I approached drilling in to a £300 model with some trepidation.

This photo shows D5701 at Eden Colliery (just outside Consett) in January 1967 with the silver grilles as per the model:

SLW provide the different underframe tanks and the additional air pipes for the Tyne Dock 24s so these have been fitted along with the shed plates and the headcode has been changed to be correct for an iron ore train. I've left the factoring glazing for now but, once the weathering is all complete, this will be changed for Lazerglaze from Shawplan.

The 24s on the Consett line could get epically filthy so, next up, I've made a start on the weathering with my usual method of brushed on pastel chalks. Starting with the roof (I'm not 100% certain that the roof layout is correct for D5107 at this time, but, until I can find a photo, it is staying as it is):

And on to the body:

Further progress on the 24:

Cheers gents, I've sent Phil a couple of photos of progress so far.

Conscious of the fact that it can be quite easy to go overboard with the weathering I thought it might be interesting to do some before and now comparison photographs and it is surprising what a difference even a modest amount of work can make...

And a glimpse in to the future with the 24 doing what it supposed to do:

Anyhow, with the exception of the installation of the Lazerglaze, I think I'm calling this one done. The rather unforgiving nature of the camera has exposed that there does appear to be part of a fingerprint on one of the noses but this is invisible to naked eye...

So, what is better than one dirty 'Tyne Docker' Class 24, two of them.

D5109 is now making it's way through the weathering shop. The loco has been renumbers with Modelmaster decals which are slightly larger than the standard SLW numbers but I'm happy that it is not too noticeable. The missing MU cable at one end is correct as per a photo I have of the loco on 21 March 1967 albeit another photo I have from a week later shows the cable had been replaced. At the same end, the right hand buffer should actually be smaller than the left hand one but I've not decided yet whether to replicate it as, in 4mm scale, the difference is very small... 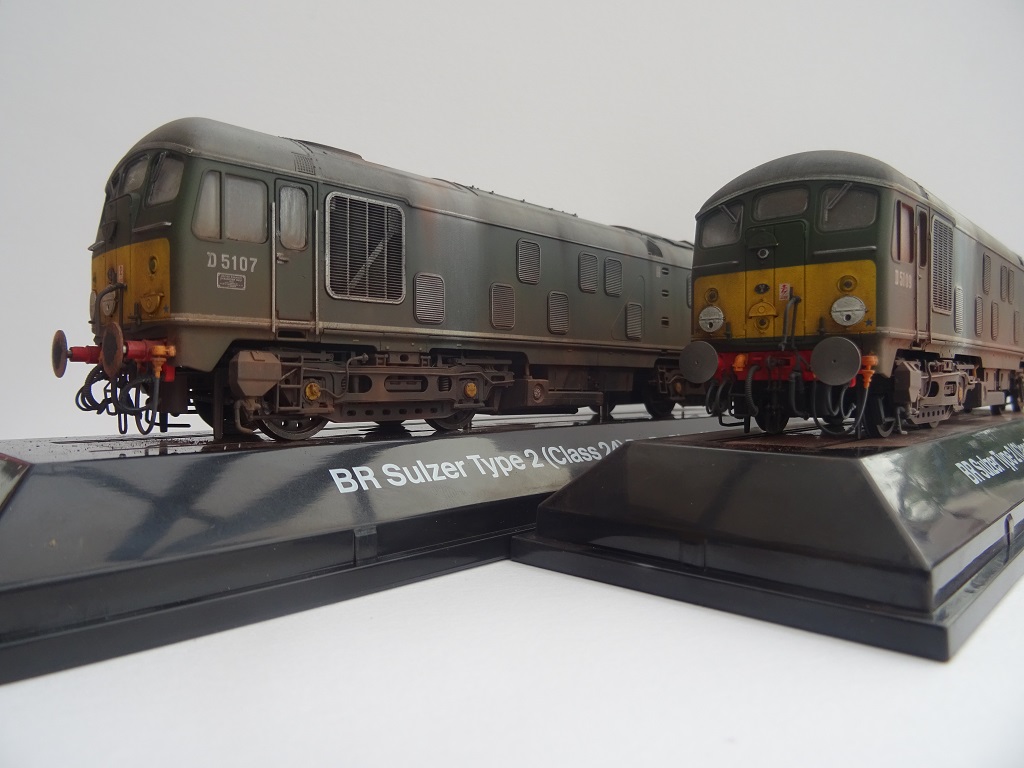 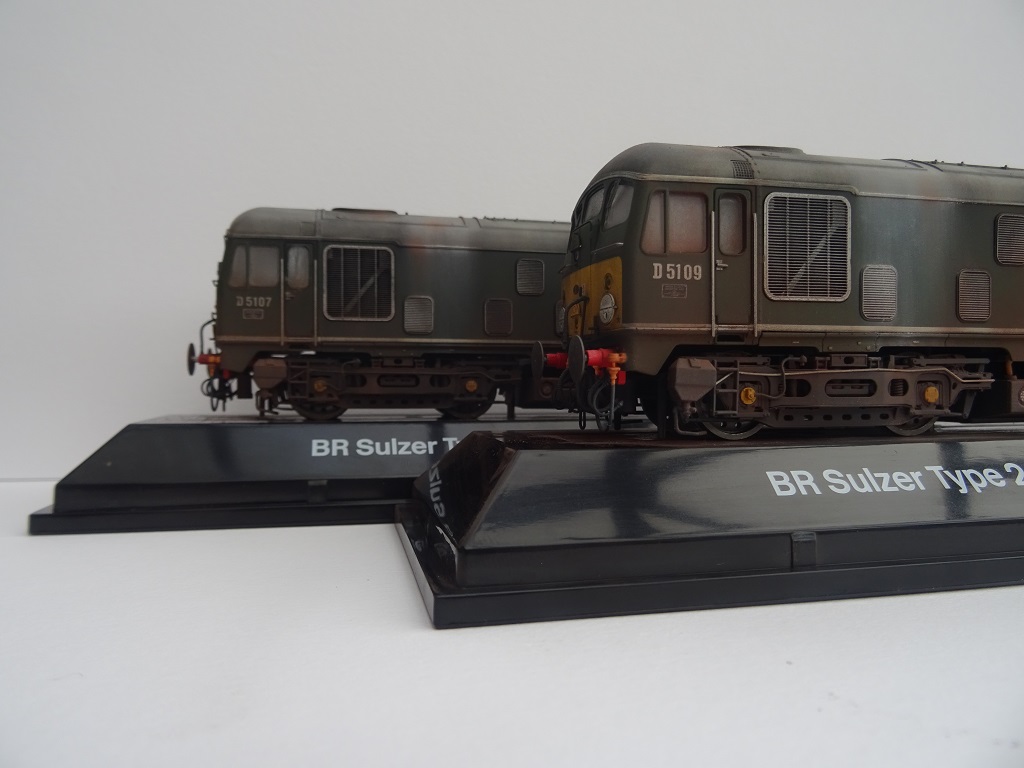 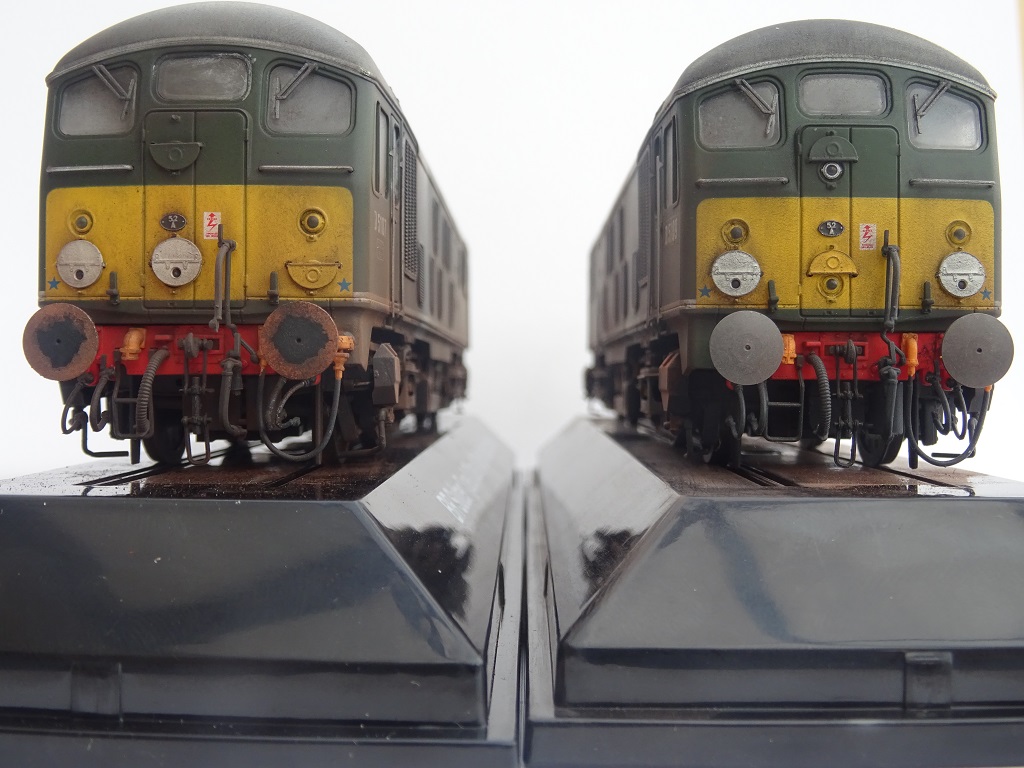 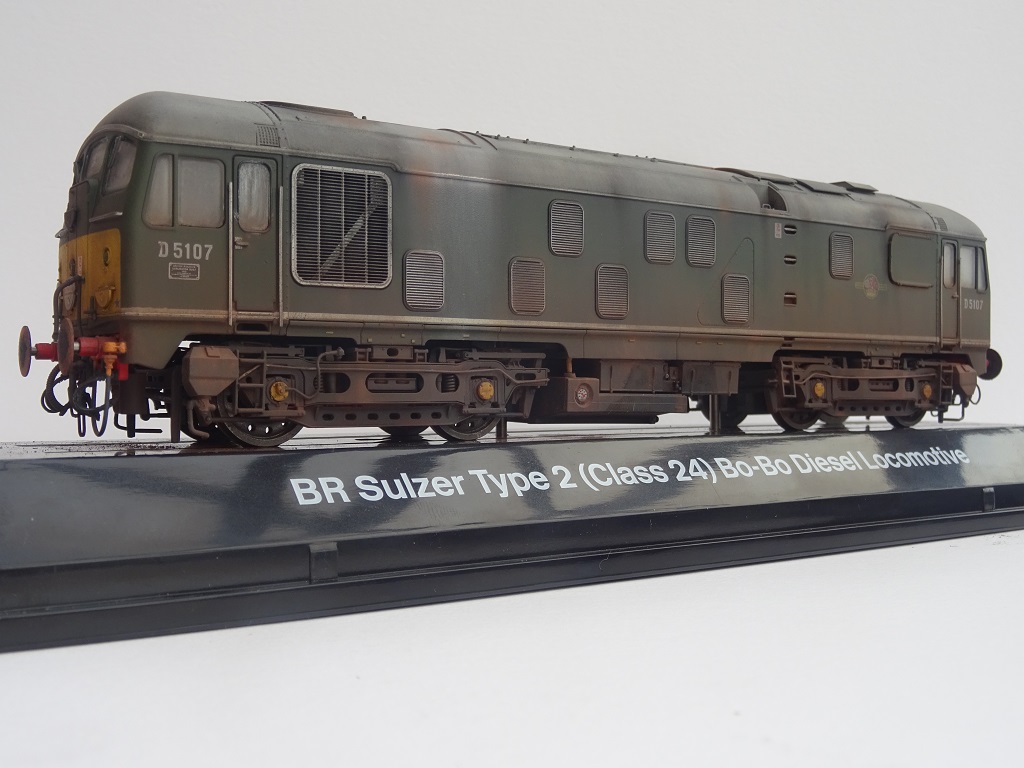 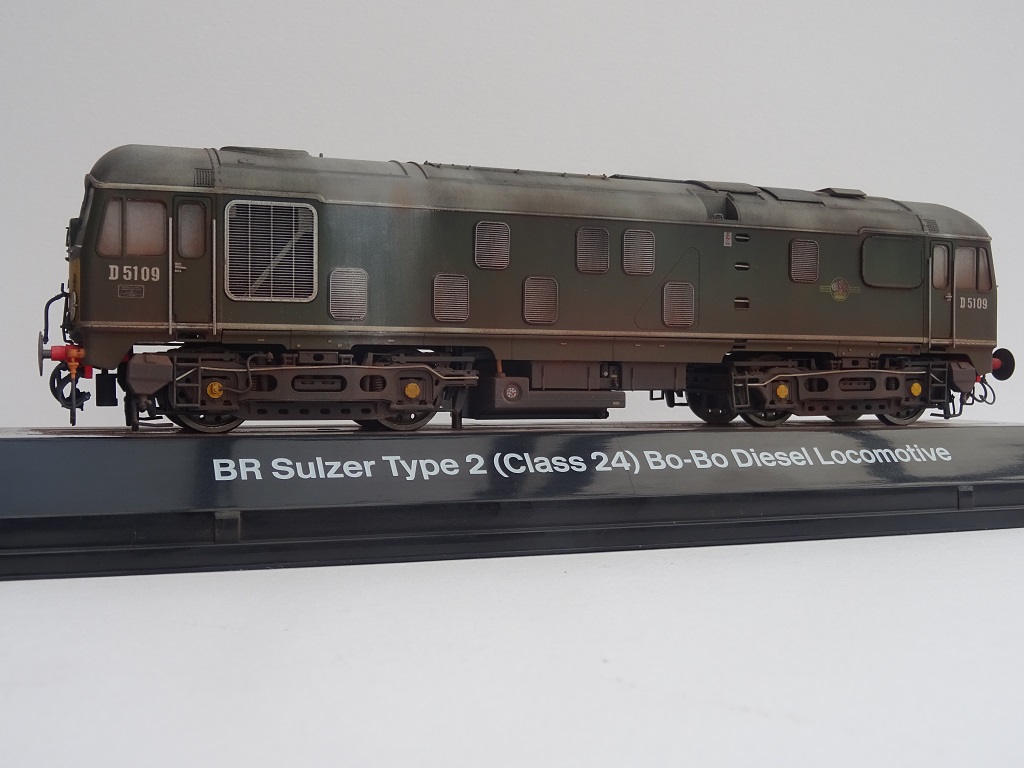 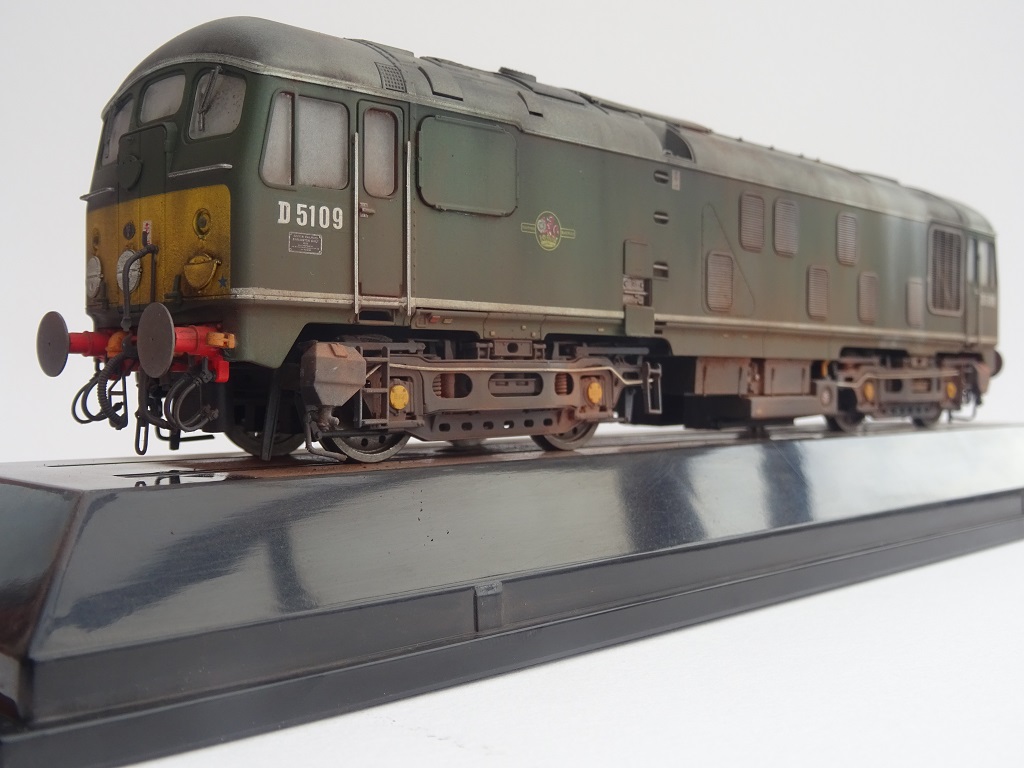 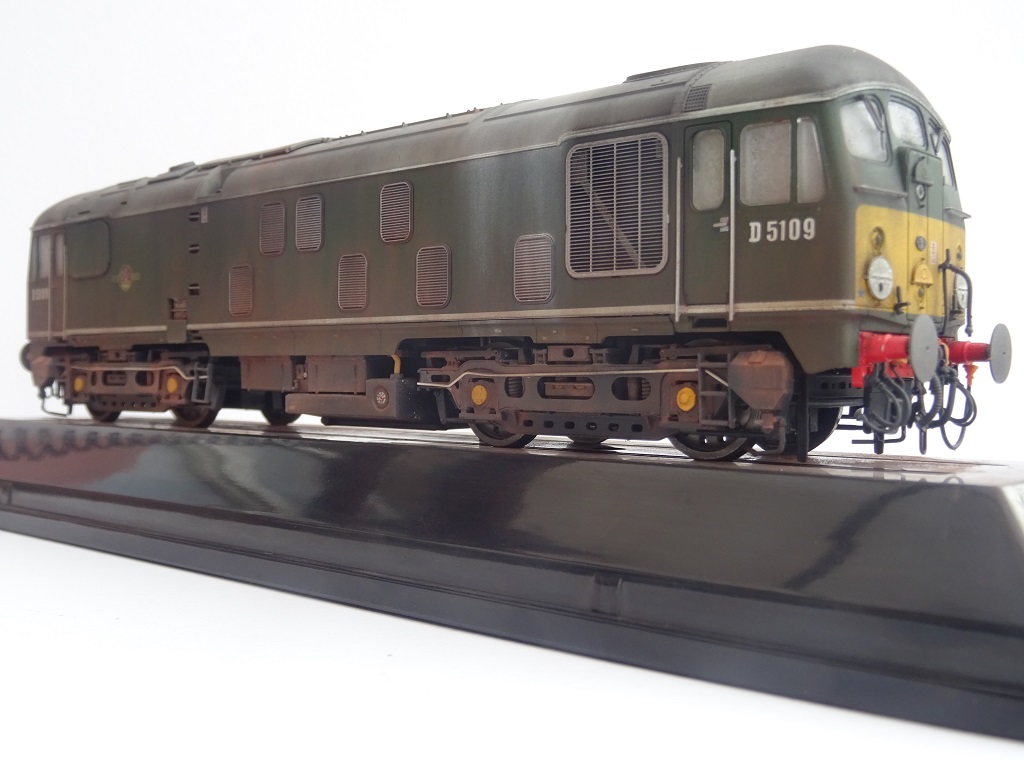 Double heading 24s, a bit overkill for a single iron ore wagon but you get the idea 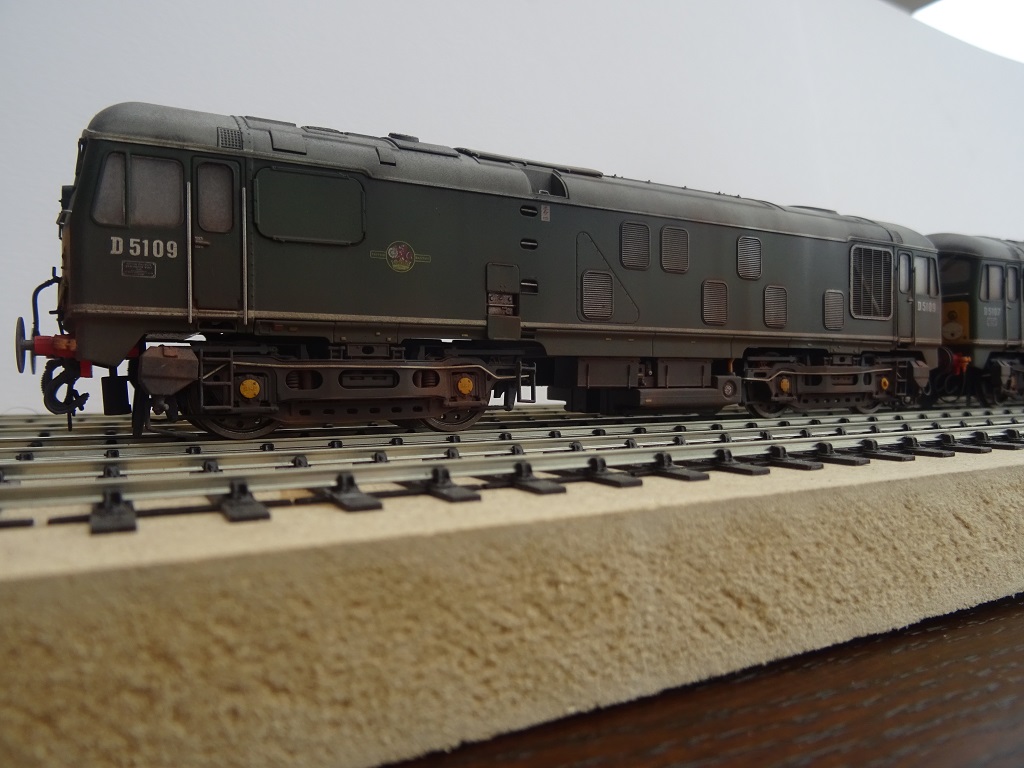 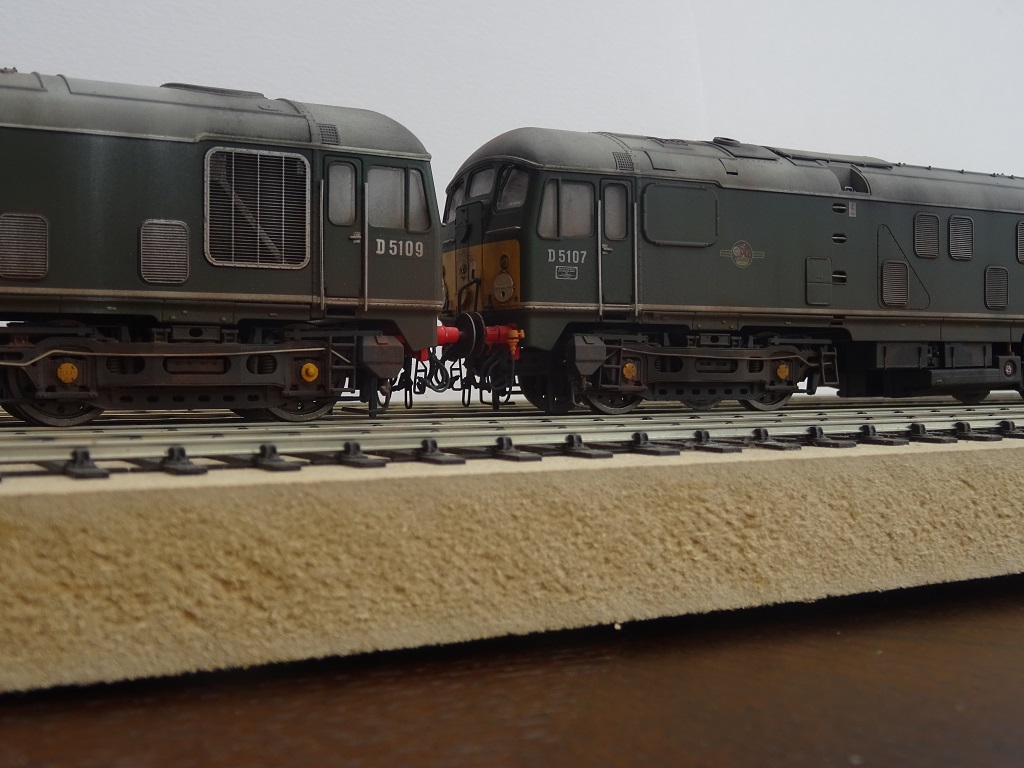 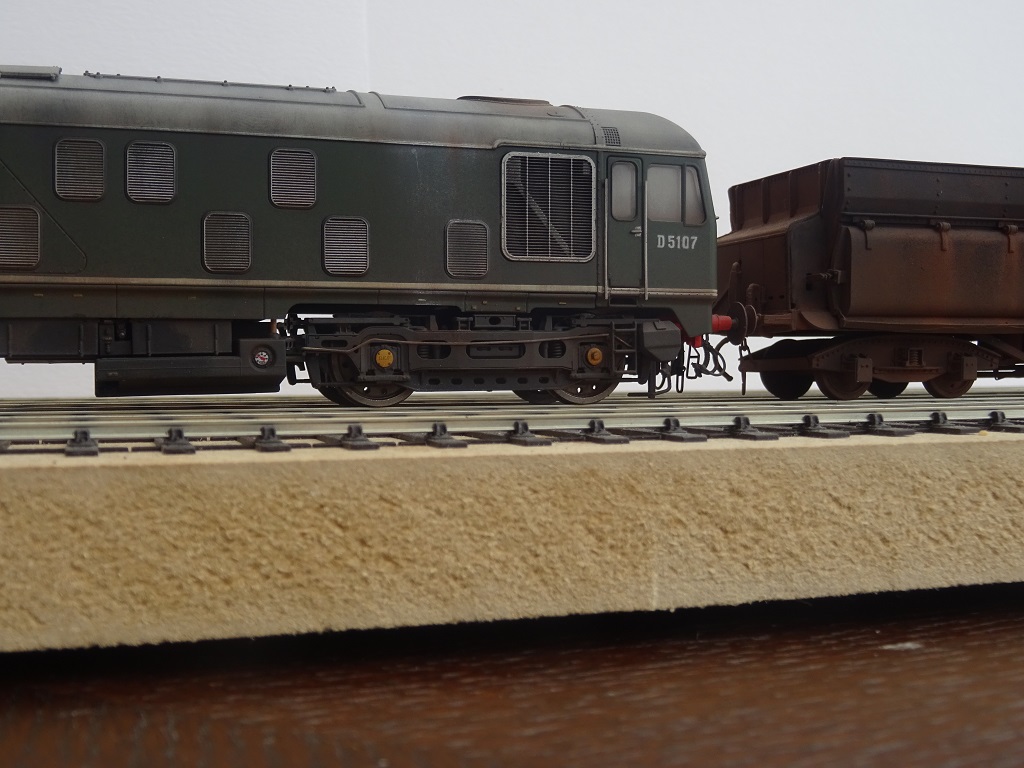 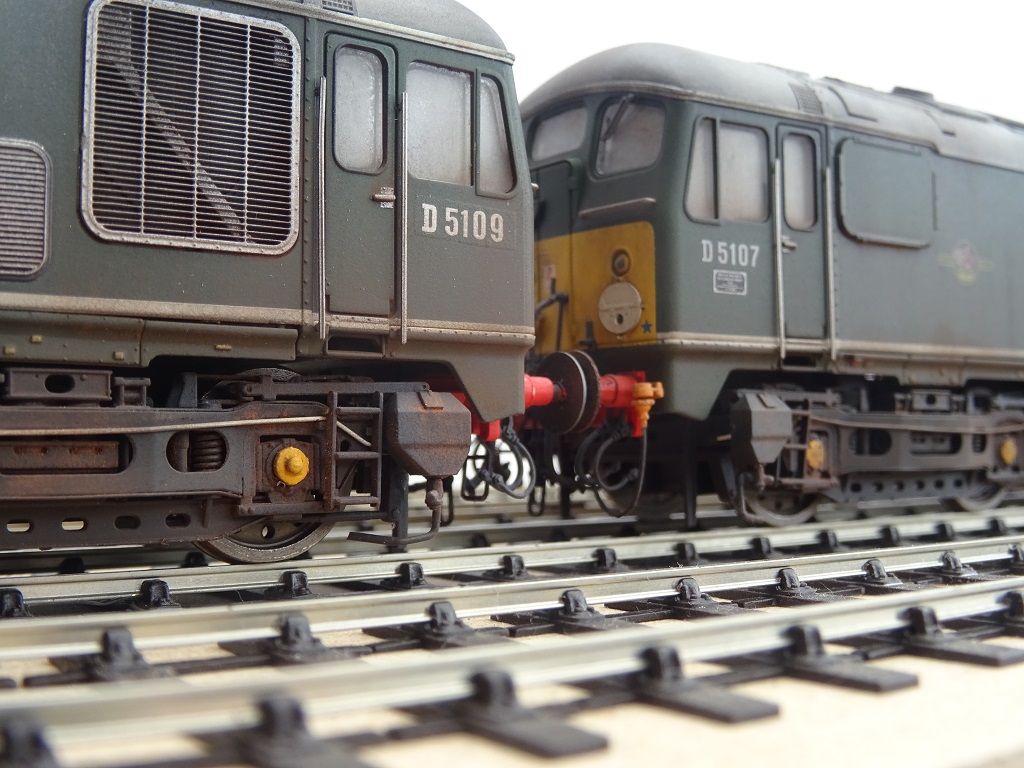 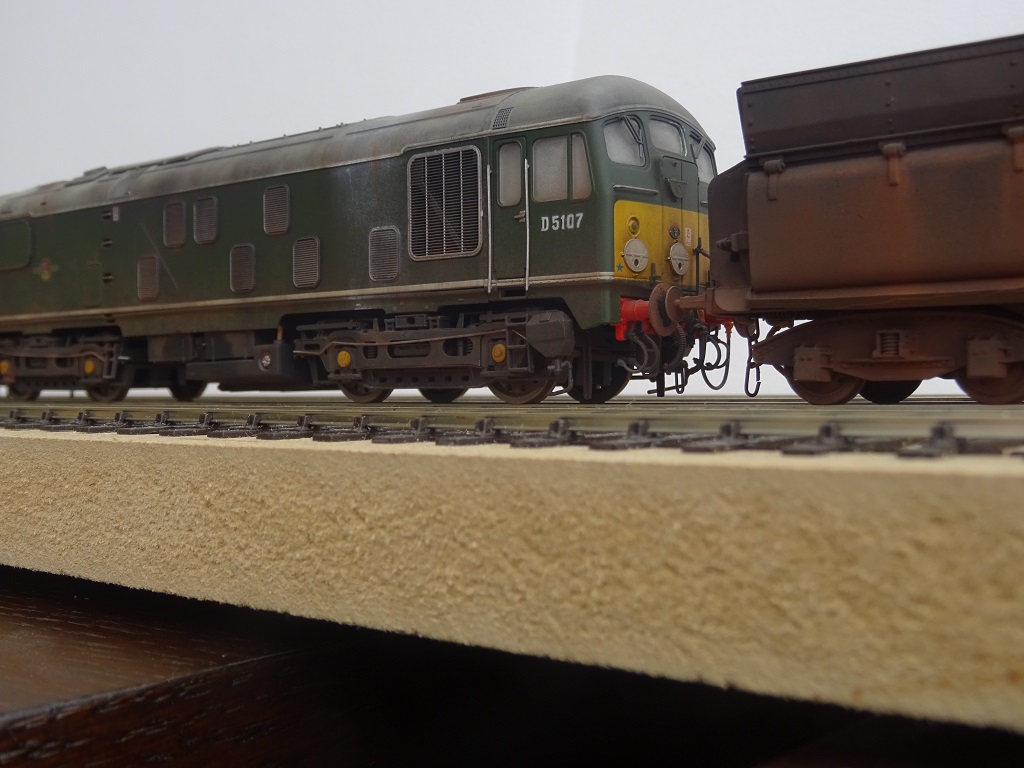 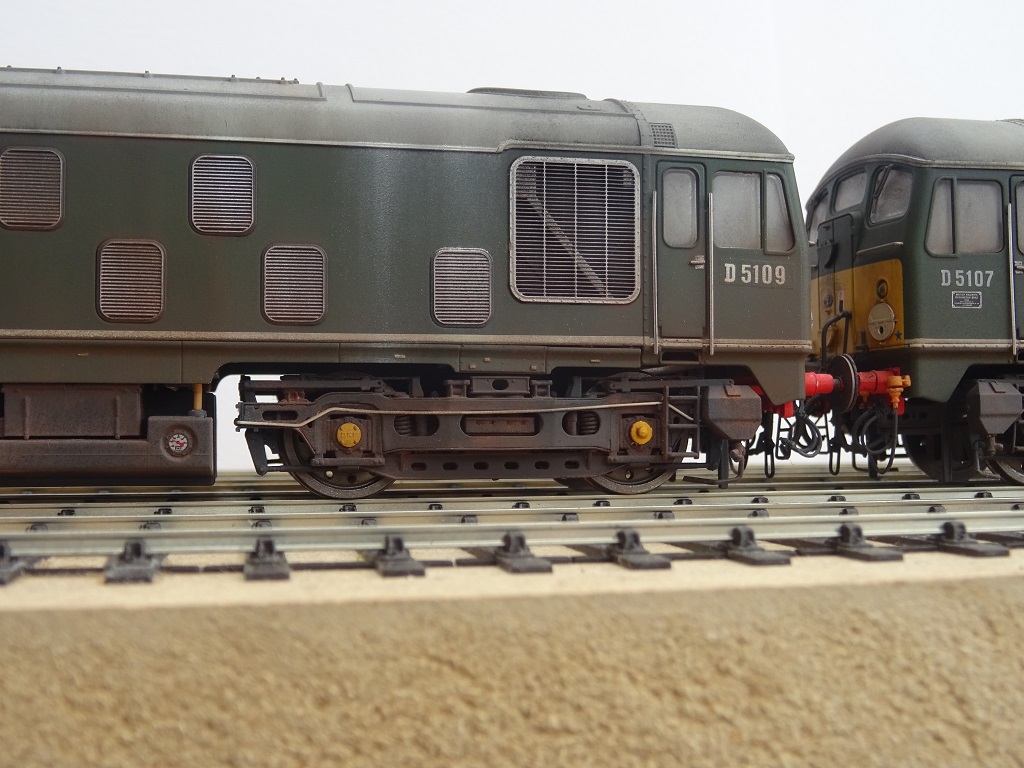 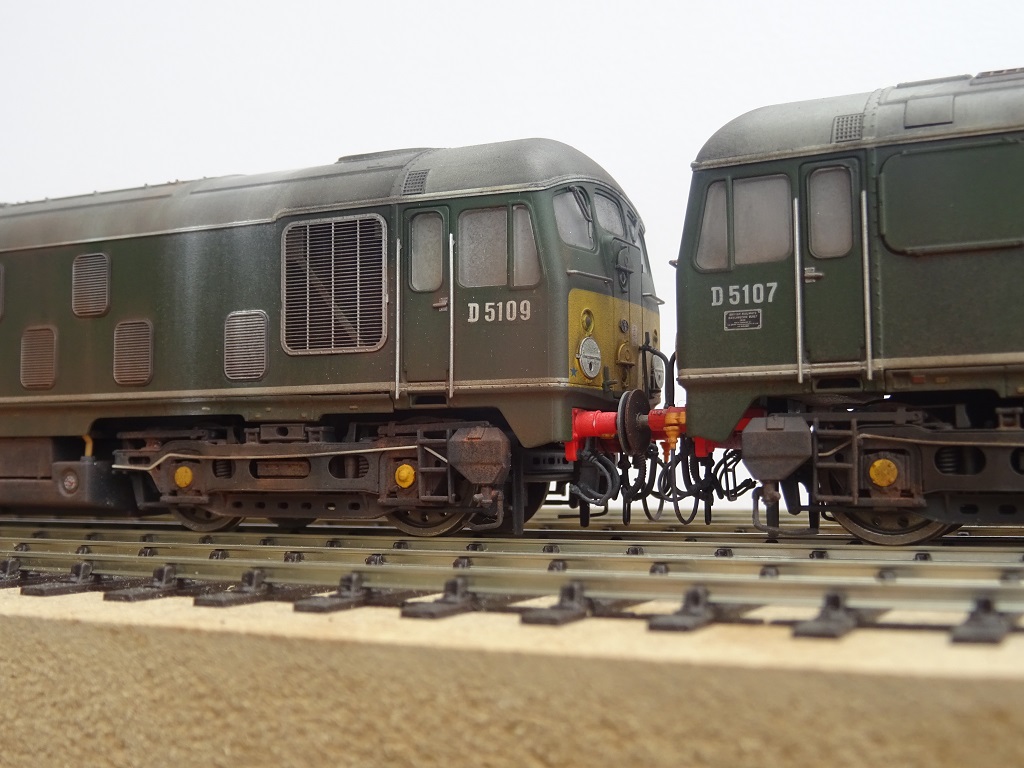 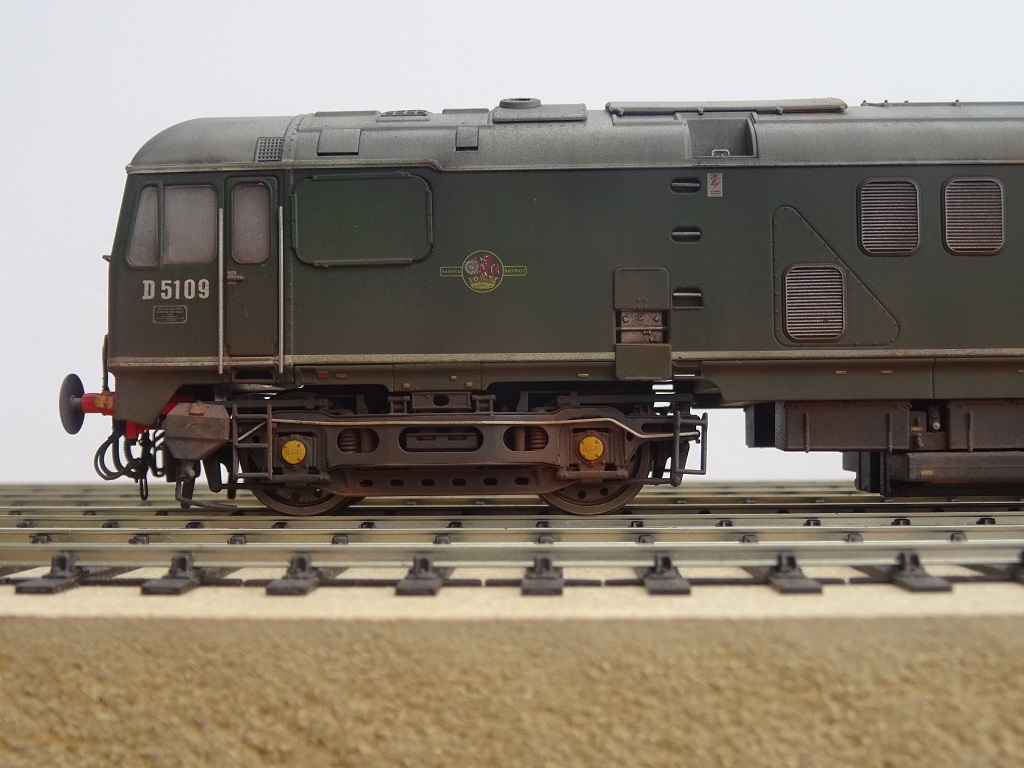 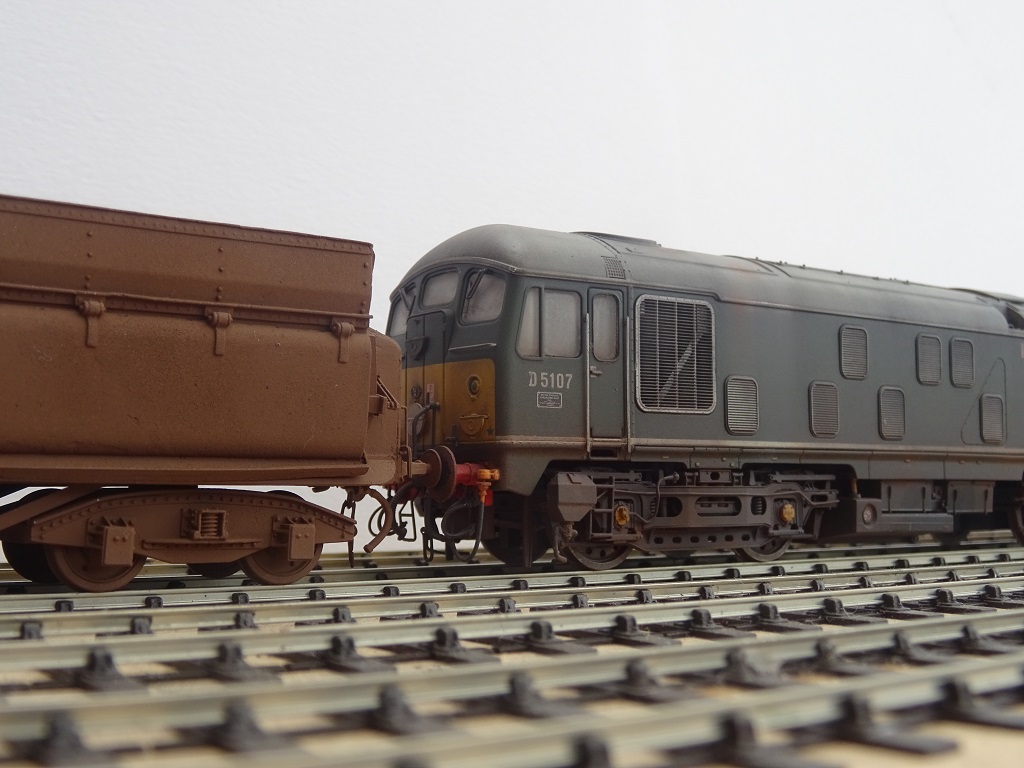 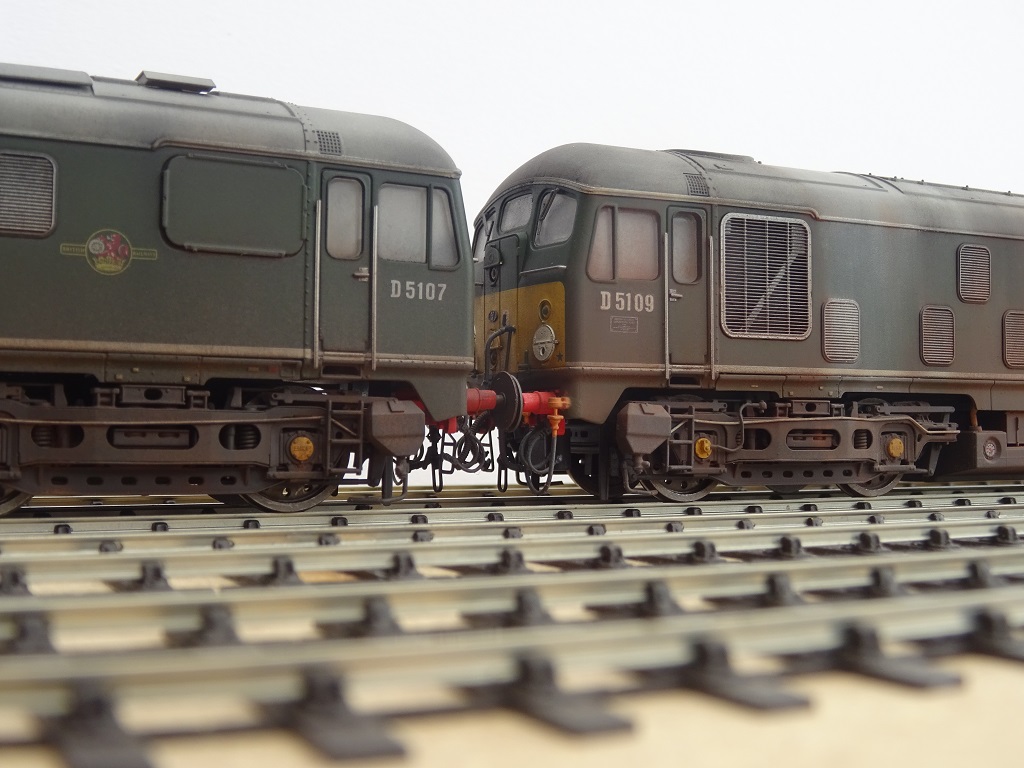 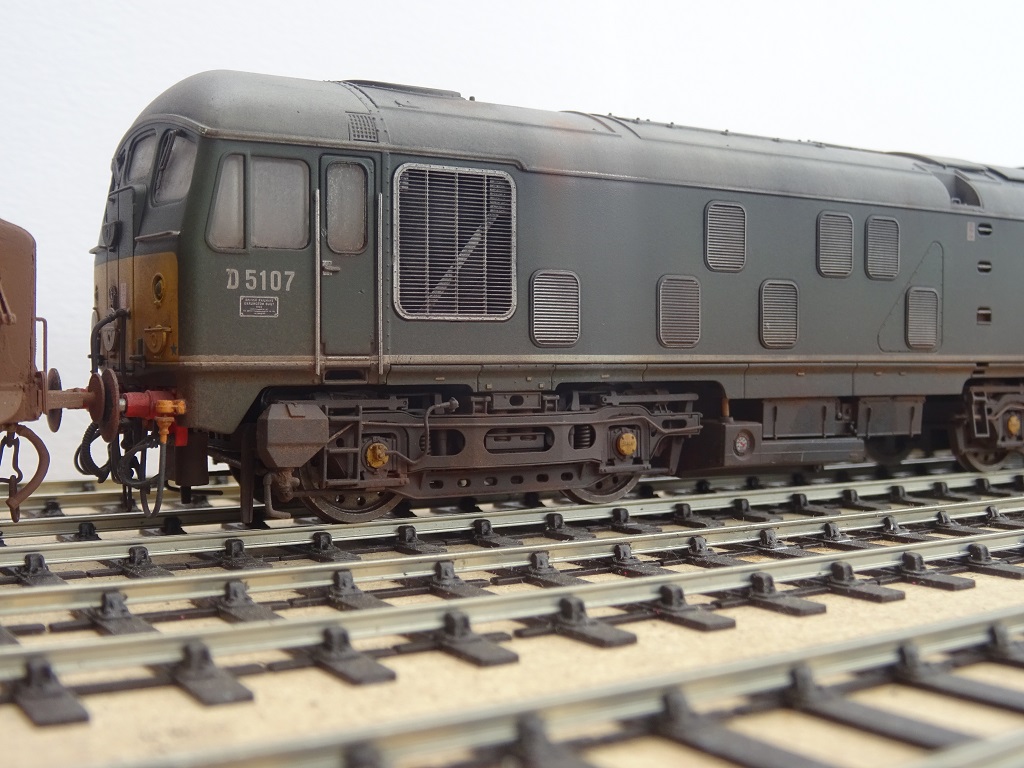 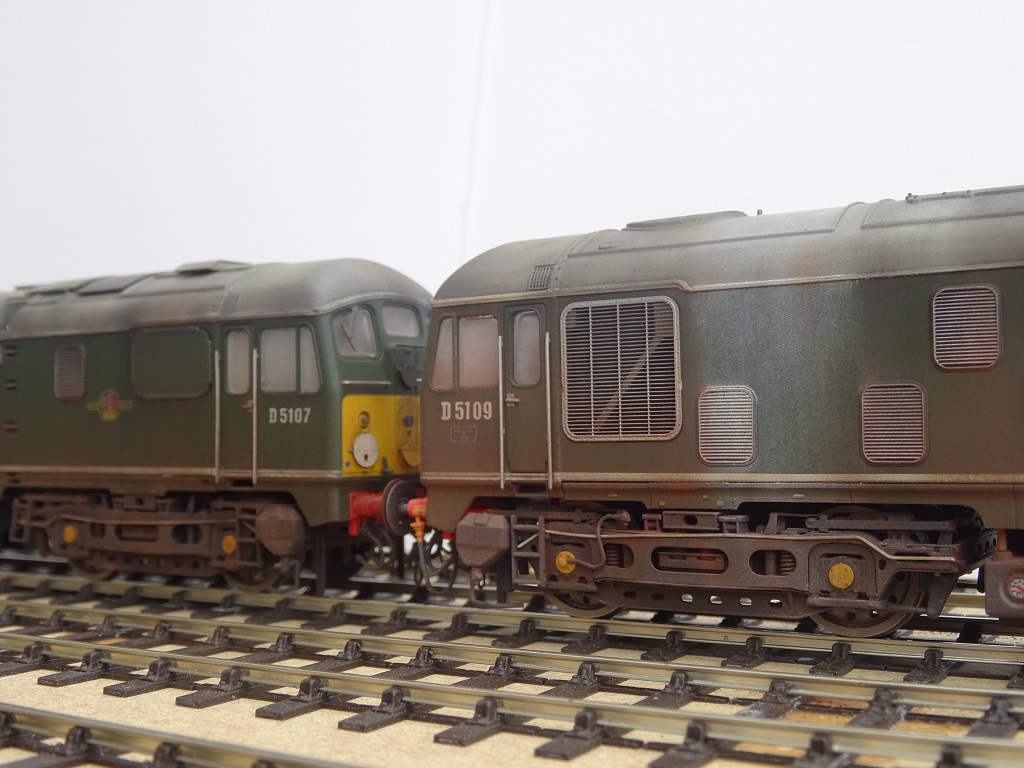 Having spent the last week working on the weathering, the plan now is to put them away for a week or so and then come back to them to see if there is anything I'm not happy with...